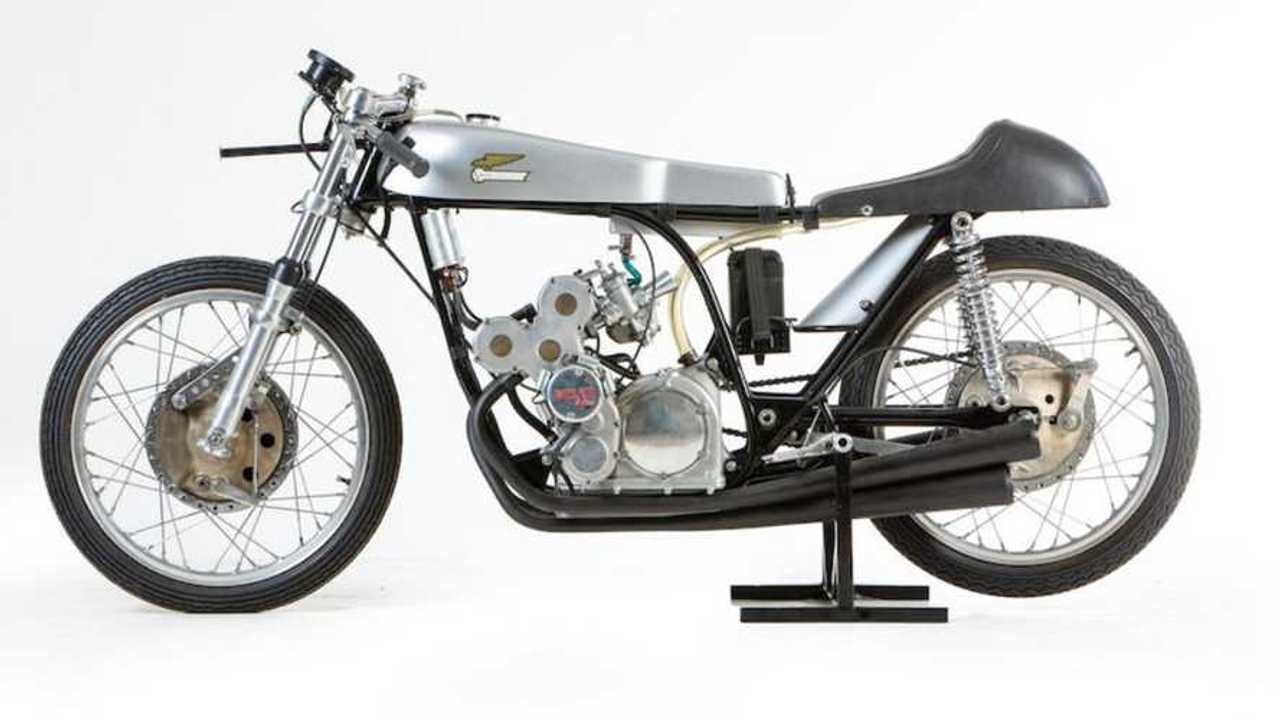 Bike parts are like Pokémon: you gotta catch 'em all.

If there’s one consistent theme that unites motorcycle racing over the course of its existence, it’s timing. The only 1965 Ducati 125cc four-cylinder GP motorcycle to ever exist is about to play a starring role at Bonhams Spring Stafford Sale on April 25 and 26, 2020. This beautiful machine is a good example of both incredible perseverance and uniquely bad timing.

Designed on paper by the legendary Fabio Taglioni in the early 1950s, it wasn’t built into even a semblance of a prototype until 1958. Although Ducati had previously been known for both singles and twins, Japanese manufacturers were bringing multi-cylinder engines to European racing series and Ducati wanted to compete. Unfortunately, by that time, Ducati was already undergoing some not-insignificant financial troubles. Eventually, the four-cylinder GP project got shelved until 1965.

It’s not always true that if you’re not first, you’re worst. However, keeping this project on the back burner for so long meant that Ducati fell very far behind its competition—particularly Honda. This meant that by the time the boys from Bologna revived the 125 GP Four project, it no longer had a hope of competing. After all, Honda was already upping its cylinder game to five by 1966. Thus, the Ducati 125 GP Four was halfheartedly completed and tested, but never actually raced.

It’s a shame, really. The completed bike represented Ducati’s first-ever four-cylinder engine, which used four non-desmodromic, spring-closure valves per cylinder. It also made use of an eight-speed gearbox. After Ducati decided not to race it, the bike ended up touring the world as a showpiece before inexplicably being torn apart. No one knows exactly what happened or when—and if they do, they’re not telling.

In fact, the 125 GP Four might be just a footnote in Ducati’s history if it wasn’t for the patience and perseverance of Giancarlo Morbidelli. We’ve told you about the amazing collection he amassed and shared with the world, Museo Morbidelli. Sadly, the museum went into liquidation in 2019, and the man himself left this world earlier in 2020. One of the many contributions he made to motorcycle history over his lifetime was the reassembly of this one-of-a-kind Ducati.

Somehow, Morbidelli found out that the engine had made its way to the Technical Museum in Riga, Latvia. Meanwhile, most of the frame was later located in what was Yugoslavia at the time but is now Croatia. Racer Franco Farne, who had been the official test rider for the 125 GP Four, confirmed the identity of this frame.

Morbidelli took the existing pieces and fabricated whatever else was necessary to put this unique bike back together again. According to the Morbidelli Museum curator, the man was even busy working on that tank on Christmas Day one year. This 1965 piece of motorcycle history was reborn in the early 2000s, through Morbidelli’s hard work and expertise. It’s now expected to fetch between £400,000 and £600,000, or US $510,000 and $770,000 at the Spring Stafford Sale.