Lots of us live in parts of the world where, for several months out of the year, it’s cold enough that there’s snow and ice around. This weather is typically terrible for motorcycles. Can you still ride on the street through a snowy, icy winter? Sure, if you plan your routes carefully, stay on plowed, treated roads, and take steps to mitigate the possibility of frostbite. Most of us, though, winterize our motorcycles, park them inside, hook them up to a battery tender, and get to work on all that deferred maintenance while staring wistfully out into the inevitable blizzards. 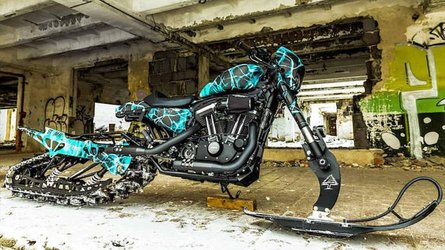 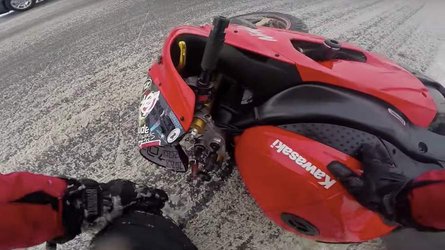 But wait, there’s good news! Do you live near places that will be reliably snowy and/or frozen? Do your neighbors have snowmobiles? Do you have a dirt bike and places to ride it that don’t get cleared by snowplows? You might want to look into converting your motorcycle to a snow bike.

Before you say “nah, too expensive,” let me lay out a few options for you, because some of them are super cheap. Some will take half a day, and some will take a few hours and a few thousand dollars. You can try the budget methods to see if you like it first before committing to a more expensive option.

The simplest, cheapest way to go? Stud your own dirt bike’s tires. Do you have a set of knobbies hanging around (maybe the worn ones that are still on your bike waiting for a spring swap)? Even if they’re mounted on the bike, you can stud them in situ. Look at those knobs, get an idea of how deep they are, go to your favorite local hardware store, and buy several hundred sheet metal screws that are no longer than your most-worn-out tire knobs are deep. Get real comfortable with your favorite corded drill, and install two or three screws into every knob on your tires, front and back. It is good practice to put a dab of super glue on the threads of each of those screws.

It takes a few hours, but what cost extreme fun?

These not-really-tire-stud screws will offer pretty good traction on bare ice or packed snow. Keep in mind, especially if you’re riding with other people, that while you ride your tires will spit these screws out with wild, unpredictable abandon. Anyone near you should wear eye protection. The grip these cheap screws offer on ice is okay; they are not ice racing tires but are good enough for goofing around on a well-frozen lake while wasting hydrocarbons. Studded tire handling in deep snow isn’t great, but steer clear of trees and you’ll have repeated soft landings.

If you love these but hate reinstalling a third or more of the studs every time you want to ride on ice, you might want to try some purpose-made ice studs/screws. I have used “Kold Kutters” in the past with excellent results. They’re quite a lot more expensive than the sheet-metal-screw route, but they stay in the tire better (use super glue on these, too), and bite better on ice. There is a caveat here: do not ride your bike on dry pavement at all, on studded tires. They will get damaged within a couple hundred feet. They’ll still work but pavement-dulled studs lose most of their effectiveness on ice (and screws and studs offer zero grip on pavement). Walk your bike from the ice to the trailer. On ice, you’ll find that these studs, when sharp and undamaged, offer grip like a sport tire on warm dry pavement. Roosting a Squishee out the back of your dirt bike is a special kind of fun.

Get Some Studded Tires

We’ve all seen that video of a sportbike riding ice with dagger-like tire studs, right? That style of stud bolt must be installed from the inside of the tire, so if you want to install those you’ll need to take your tire off the rim, and then deal with remounting a tire covered in daggers. These are absolutely tractionless on pavement. They are generally installed by professionals since they involve putting a lot of holes all the way through the tire carcasses, a washer inside and out on every one, and remounting that sharp tire. The traction they offer on bare ice, though, can be described as magical.

Convert To A Tracked Snow Bike

Finally, if you are loving your winter motorcycling and cannot wait to get out on deep-snow trails on your bike every weekend, a snow bike tracked conversion kit might be your top level of fun in the snow. There are a healthy handful of companies that make bolt-on conversion kits that contain a wide, rubber, spiky tracked rear end (like a tank) and a front ski. These kits mean great all-terrain handling even in deep snow (though, like a snowmobile, you’ll probably mess up that front ski if you take it over rocks and pavement for miles). Most of these kits are a direct conversion and easily reversible: just unbolt the kit and put your wheels back on in the spring. They will run you anywhere from around $4,000 to $8,000, not including professional installation (should you choose it), depending on the brand and the features you choose, and that is above the initial cost of your motorcycle. It’s not an inexpensive kit, but it’s quite a lot less than purchasing and maintaining your own separate snowmobile (and arguably a whole lot more fun).

Your options for terrain, motorcycle, and cost are pretty limitless here. Winter is coming, and even if you don’t own a dirt bike, when those snowflakes are barreling down on us it's generally a great time to buy a used motorcycle! Have you studded motorcycle tires for snow or ice riding? Have you invested in a tracked conversion? When do you put your bike’s snow tires on, every year? How do you tell when the ice on your favorite lake is safe to ride?