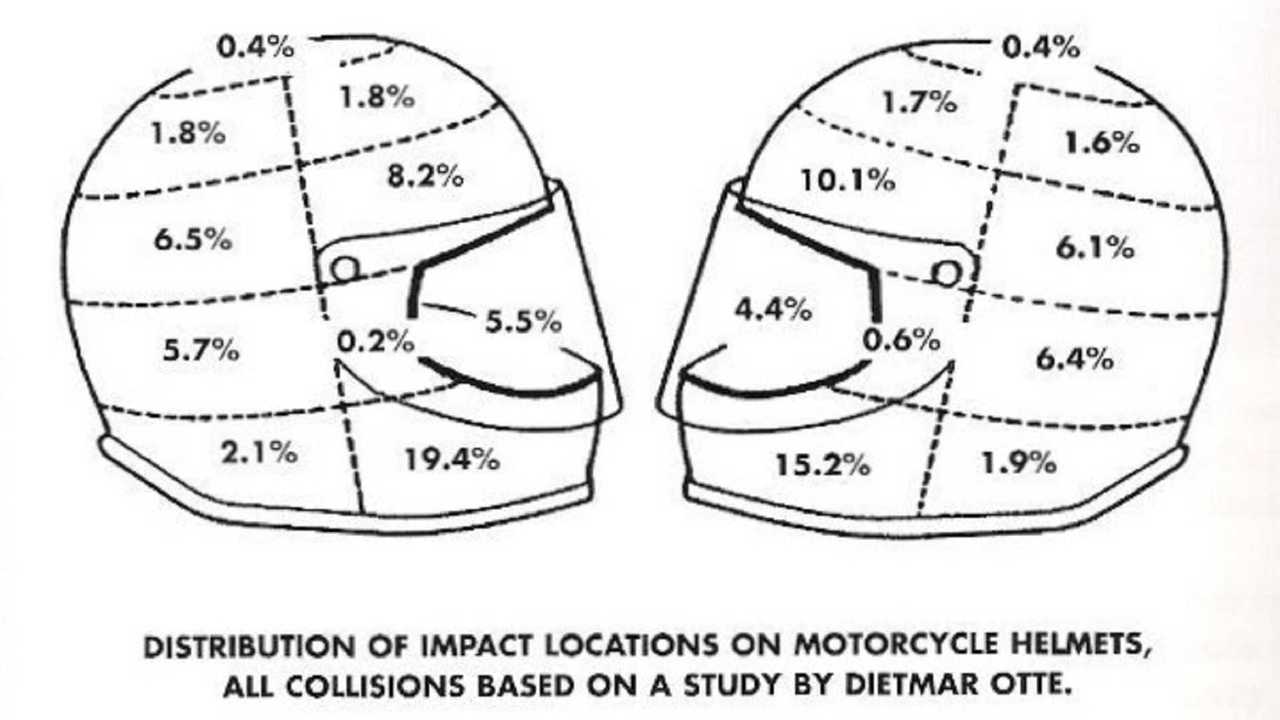 Luckily, a nice German man named Dietmar Otte spent a few months in the early 1980s researching this very fact and was able to give us a quantifiable number. That number is 45.3 percent. In the image above, he shows that the primary impact in most motorcycle crashes happens in the chin bar area. A total of 34.6 percent of crashes happen there (19.4 on the right, 15.2 percent on the left).

A little over 10 percent more impacts happen in the face shield area. Even when those zones are not the primary impact area, they still often suffer grazing and abrasion. This was further verified by version 2 of the Motorcycle Accidents In Depth Study (MAIDS) report in 2009.

So the long story short is, a large enough amount of crashes happen in the face area and chin bar to make a full face helmet almost mandatory in my eyes.

I once asked a rep from Arai why their helmets look so dorky compared to everyone else's’. They’ve been the same, round shape for decades—and it’s for a reason. Round helmets slide and skim better, and don’t give an opportunity to catch and snag and twist your head during a crash. The shape of many open face helmets, and especially the tiny beanie style helmets, gives a lot more opportunity for injury.

Brands like Shoei, Arai, Schuberth, and AGV all produce helmets with advanced energy-absorbing technology and rigorous testing. Many a beanie-style helmet meets only the bare minimum for testing standards. Note I said many: There are offerings from Shoei, Bell, and HJC that offer better quality impact protection in a half-face helmet, but all in all, the interior quality of half-face helmets is lower than it is in the full-face world. At least unless your helmet is a fake.

Not Just The Crash

I had a friend who once had to abort our group ride 20 minutes in after a large bee hit him square under the eye while riding in an open face helmet. The impact at 70 miles per hour was enough to cause his eye to swell up instantly, as if he’d been punched. I copped a small rubber grommet in my mouth while riding with my modular in the open position once—I was doing less than 20 mph at the time but that impact was hard enough to split my lip.

Ever ridden behind a sand truck for any length? I’d prefer my helmet get sandblasted than my face, but that’s just me.

At the end of the day, there’s a very, very good reason why full face helmets are increasingly popular. There will always be a portion of the population who need the feel of the wind on their face to feel happy on a bike, but they’re taking a risk I’m just not prepared to. When push comes to shove a full-face helmet offers nearly double the protection of an open-face helmet in a range of scenarios.