When men were men and workers were expendable.

People always like to talk about “the good old days”, and how kids these days have gone soft. This isn’t exactly a new thing. Socrates himself complained that the “children now love luxury; they have bad manners, contempt for authority.”

Real Manly Men Impress Their Girlfriends By Jousting… On Vespas
⠀ 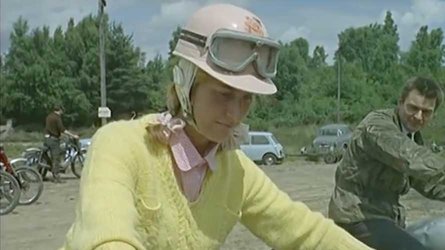 From The Archives: Housewife By Day, Trial Rider By Night

Well, I’ve looked at how things were done in the good old days, and it looks terrifying. These videos showing the manufacturing process of the Rudge Four motorcycle from the 1920s is downright fascinating. Yes, the men were tougher than me, but they probably died way younger than me as well. I’ll be a living sissy rather than a dead tough guy, thanks. That’ll be the title of my autobiography.

The process of manufacturing individual components is such an interesting thing to watch, especially because of the lack of computerization. We’re used to watching How It’s Made (or at least I am) where all sorts of little gizmos are formed by complicated systems of conveyor belts and robots, but seeing it all done with lathes and hand tools is another animal entirely.

For example, when they forge the valves, they are having to forge each one individually. Nobody is calling out to the material handler to bring down another crate from the receiving warehouse, somebody with a set of tongs is making each one with a press. I had never even considered how that used to be done.

I also can’t get over how it seems like death or dismemberment is a breath away at every step of the process. When those valves are being forged, it seems that there are so many ways it could go wrong. A power hammer of some sort is pressing them into a die, and then a second man shoves a block in the way of the press to block it so the first man can pull the valve out. That’s the safety technique: shove a big block with a handle into the giant smashy machine to jam it, so your friend can then reach in there with tongs and move things around. There’s no way that could go wrong and cripple you both.

When they do their road tests, there are full-on jumps. That’s part of the official procedure; to put on your tweed cap, go out on a dirt road, jump this motorcycle that somebody just built, and hope it doesn’t break and kill you. Can you imagine if any manufacturer did that today? Sure, every manufacturer does unfathomable amounts of testing, but nobody is jumping every bike on a dirt road. Although maybe they should. I’d certainly love it if when I purchased a motorcycle it came with a little placard that told me how many times it had been jumped and how far, but maybe I’m the outlier.