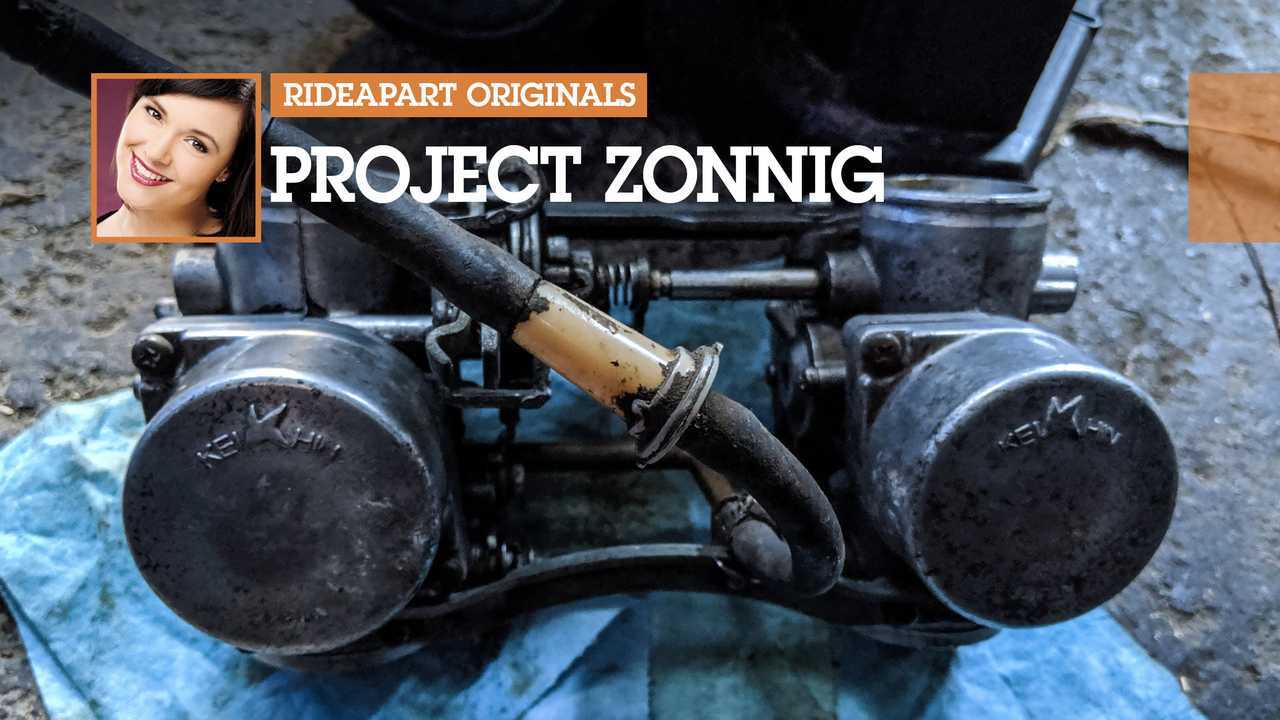 Sorry for the radio silence on the status of my bright orange 1979 Honda CX500, folks. I had to put the project on the back burner for a few weeks, but I am now back at it! Last time we touched base, I had an orange gas tank sitting on my coffee table, filled with white vinegar to eat away at the rust stains on the inside.

I won’t expand too much on that experiment because it didn’t really go as I expected. The tank isn’t designed to be emptied, it’s designed to hold its content, so emptying the nasty vinegar and rust mixture was a bit of a nightmare.

Especially when the petcock started leaking because I had the brilliant idea of setting the tank on the ground, putting pressure directly on the old metal, without realizing it might damage it. The part ultimately broke off, spilling gross, orange, smelly stuff everywhere.

I ended up needing double the usual dose of caffeine when it all happened at 6 in the morning. There was a lot of swearing and countless sighs of desperation. A blend of vinegar, rust, and old gasoline isn't exactly easy to clean up. You live, you learn.

Not there just yet.

The good news is that despite the mess, a lot of the rust on the inside cleared out. The bad news is that because there’s no way to efficiently empty the tank, a film of rust residue dried on the inside. I’m going to have to come up with a new plan of attack that might or might not involve an articulated arm, a piece of fine steel wool, and some anger-channeling scrubbing.

While I figured this whole tank debacle out, I decided to upgrade to My Little Mechanic Level 2 by tackling the carburetors. The former owner mentioned they needed work and pretty much everyone I spoke with recommended I show them a bit of love.

Boy, did I take the time to prep for that step! That was going to be the most invasive procedure I was going to perform on the bike yet and I wanted to be as ready as I could be. Unlike the other steps I had followed until then, finding an exhaustive list of the tools and equipment I was going to need wasn't so simple and figuring out where to start was initially a bit overwhelming.

I ended up finding two separate YouTube videos to guide me through the whole thing. The first one by The Odontologist walked me through the removal process, while the other by Tepco Cycle Repair taught me how to open the carbs and clean things up.

After watching and rewatching the videos, I was able to form a decent list of recommended supplies to buy which included two gallons of Pine-Sol, metal polish, graphite oil, steel wool, and a fancy carb kit composed of a selection of small brushes and cleaning needles.

Beginner's tip: removing and cleaning carbs is like having kids. You can read all the “What to Expect When You’re Expecting” books in the world, no matter how ready you think you are, you still have no idea what you’re doing.

It’s Nice To See You Again!

The first step was, of course, to head back to my friend’s garage where the sad, naked carcass of my bike had been sleeping, alone and cold for a few weeks. I’ve never ridden on the thing and haven't had a chance to properly bond with it yet but it was good to see it again. Picking up where I had left off also made me feel slightly less guilty for abandoning the project for so long.

It's good to see you again buddy.

I wasted no time getting started on the carbs. I kept The Odontologist's video rolling on my cellphone to walk me through the steps.

I started by loosening up the clamping screws located at the intake and at the exhaust ports to help free the block. According to my Clymer Manual, it is recommended to remove the manifolds, the two rubber conducts connecting the cylinder heads to the carburetors. Doing so helps free up some space and make the carbs easier to wiggle out.

The thing is that on my CX, the bolts holding the two conducts in place are screwed tight and what should be supple rubber feels like hard plastic. The manifolds weren't bulging—at least not with the equipment I had.

I ended up removing the rubber boots at the back of the carburetors instead, connecting to the air filter I believe (according to a friend, I personally have no idea what they connect to yet). Those were still flexible enough to be wiggled out and removed.

They took a bit of convincing, but I figured it out.

I was then able to slowly and gently slide the carbs out of the left of the frame (not out the right because of the cables), enough to have access to the choke and throttle cables (those cables).

The cables were a bit of a pain in the neck to slide out their respective pulleys, but I managed nonetheless without breaking anything. The cables are crusty and in pretty bad shape, so I’m going to have to add those to my list of parts of buy and replace a little further down the line. Thankfully, they’re pretty cheap and easy to find online—most parts for the CX500 have been so far. I chose my guinea pig well.

After a bit of encouragement, I was finally able to free the carburetors. I shoved sheets of blue shop towels in the cylinder and air filter gaping holes to avoid dust from getting in and placed the carburetors in a plastic container for transport.

That Rack Has Got To Come Off

Before heading back home, I had one last mission to accomplish and that was to remove the gigantic luggage rack from the back of the bike. I've had it in for that rack since the day I bought the bike and I was hell-bent on getting rid of it. The last time I visited Zonnig, I didn’t have the right tool to remove the lug nuts. This time, I did.

That's not where blinkers go.

I had to remove the rear turn signals which were attached to the rack. They easily slid out of their metal sleeve and the whole rack came off without putting too much of a fight. Before this (re)build is over, I will have to get my hands on a rear grab bar to replace the rack—it doubles as a support for the rear blinkers. While I’ve never bought anything off of eBay, I have a feeling that by the end of this, we'll be best friends.

My Type Of 3-D Puzzle

I finally brought the carburetors home where they found a spot next to the gas tank in my living room. I’m starting to have quite the collection of conversation pieces. On a Wednesday afternoon, a few days after getting them off the bike, I turned my kitchen island into a makeshift workbench and tackled the carb cleaning chore.

I set up my laptop with Tepco Cycle Repair’s video at the ready, took out all the tools and supplies I was going to need, and sat down in front of the smelly carbs. The guy who does the videos for Tepco Cycle Repair recommended I do one carb at the time so I wouldn’t forget parts or get confused in the process—smart advice, especially for a rookie who didn't even know what a carburetor looked like until a few weeks ago.

Ready for the procedure. Scalpel!

Contrarily to the whole dismounting process, opening up the carb and cleaning it was a walk in the park. A few sprays of WD-40 took care of the more stubborn screws and despite the age of the bike and the obvious need for a thorough clean up, the carburetor looked in really good shape.

As I gradually took parts and screws out, I placed them on a sheet of paper on which I drew compartments identifying what they were. There weren’t that many pieces to set aside, but it was a good way to ensure no part would be left behind.

A little help to keep track of all the small bits.

Once I remove all the bits suggested by Tepco Cycle Repair, I soaked the left carb in a warm mixture of water and Pine-Sol for roughly 15 minutes. In the meantime, I cleaned the carburetor’s head and piston as well as the bottom cap with the help of a few generous sprays of WD-40 and a gentle steel wool scrub. The guy in the video also recommended I use a small dose of metal polish to get rid of the grime before wiping everything clean and coating the inside of the head and the rim of the piston with some graphite oil.

The Pine-Sol bath got rid of all the nasty stuff and made the main body of the carb easy to clean up. I rinsed it with water and was then recommended to spray some WD-40 everywhere to push the water out. I then dried everything up nicely and proceeded to put the carb back together, like a delicate 3-D puzzle.

Clean and shiny left carb (on the right).

Next step, I will obviously take care of the other carburetor and then assemble it back on the bike. I’ll likely take advantage of the carbs being out to replace the clutch and throttle cables as well—the parts are on their way. The gas tank and I have a date to get rid of the rust once and for all. The CX also needs a new battery. Once I receive these few bits and install them back on the bike, I am crossing my fingers that I’ll be able to give the engine good shakeup.

That's goal A. Then, obviously, I’ll tackle the rest which includes a new handlebar, probably new brakes, a thorough cleaning, some pipe scrubbing, and likely more tuning down the road). But for now, goal A is what I’m aiming for. Wish me luck, I have no idea how that’s going to go. I’ll report back once I have the new cables and I’m ready for more 3-D puzzles.