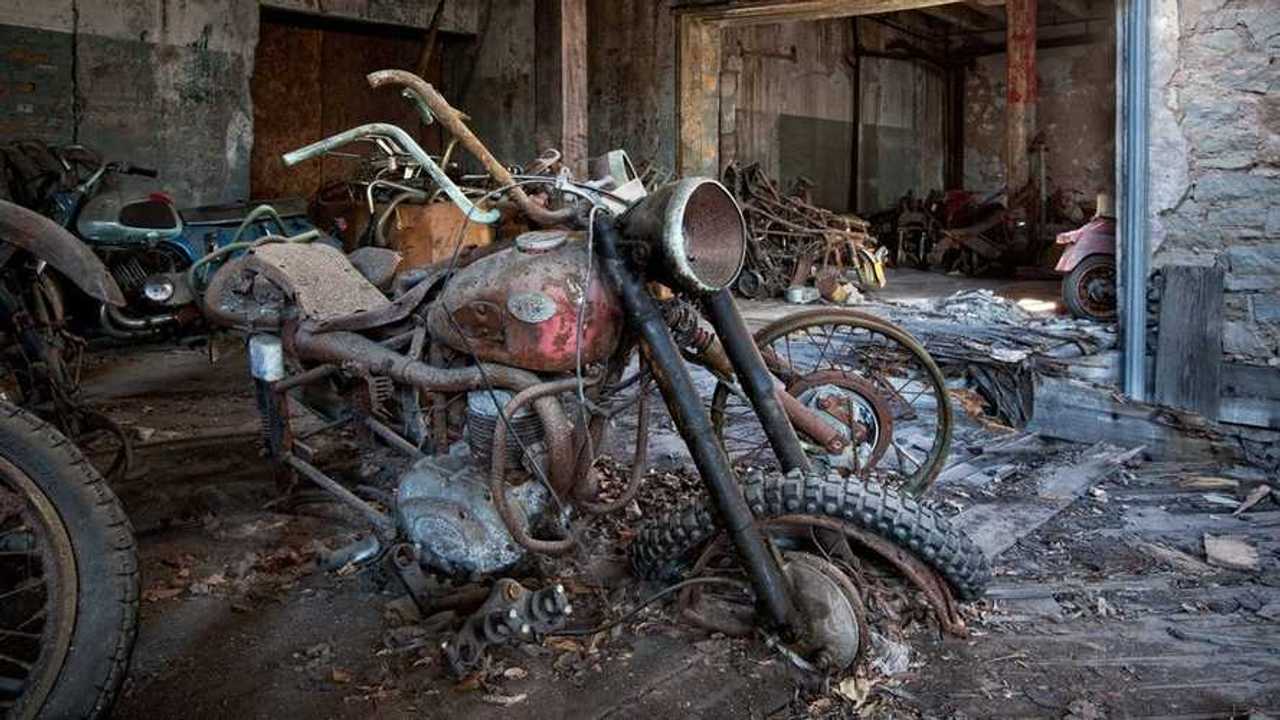 So many dead motorcycles. A senseless waste!

Everyone likes a good ghost story every now and then, and boy is this one a doozy. Often we bring you resurrections; the transformative back-from-the-dead scenario in which one custom builder or another makes a barn-find discovery and brings that bike back, better than it ever was when it was new. This is not that story.

Right near Niagara Falls, in Lockport, NY, there was once a warehouse. In that warehouse, one man who ran a motorcycle dealership called Kohl’s Cycle Sales bought up extra stock from surrounding dealers which had gone out of business, took trade-ins on the bikes he sold, and amassed this vast collection. He then got out of the business and sold the building and all of its contents on to the next guy.

That next guy was named Frank, and he ran Kohl’s Motorcycle Salvage for a time. This is where the story gets a little thin: maybe it was the first guy, or maybe it was Frank, but someone didn’t pay quite as much property tax as the state of New York thought they should. The building was seized by the city of Lockport and subsequently condemned.

Anyone who works on old Japanese motorcycles will feel the heartbreak of these side covers.

The photos tell a very sad story: hundreds and hundreds of motorcycles, abandoned and unloved, stuffed into an immense four-story building on the Erie Canal. Because the wooden building was in such rough shape, getting in there to get motorcycles out of it became a more dangerous prospect by the day. The place became known as the Lockport Motorcycle Graveyard.

In late 2010, a man named David Cuff found some pictures on the internet and decided to go have a look. He found the heartbreaking sight and encouraged the current owner, still Frank, to contact the city and try to remove some motorcycles and parts. Because the floors were collapsing, the prospect of falling through to the floor below, or of the floor above giving under the weight of hundreds of bikes, was a real danger.

Be careful, you never know what will collapse next.

Amazingly, Cuff and his friends were successful, and were able to get into the buildings and save a bunch of bikes and parts. They made several trips in and out, with a bike trailer, to salvage what they could. The rest was, unfortunately, scrapped. Time was not kind to these machines, and you can tell they spent years neglected in a drafty wooden building along a waterfront. The damp environment and temperature swings that New York state sees disintegrated quite a lot of the motorcycles.

In 2013, the building burned to the ground. That fire took any bikes or parts that were left behind with it. Ashes to ashes, and rust to rust; so many old motorcycles that once had plenty of life left in them, lost to the ravages of time.

For lots more pictures, see the Source links below.