Harley-Davidson Shows Us How To Pick Up A Bike 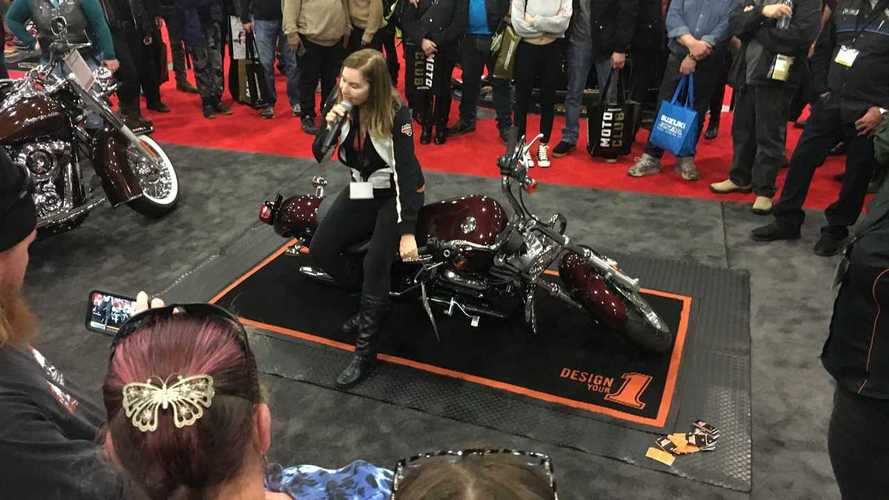 A demonstration at IMS shows how anyone can pick up a dropped bike.

Just about all of us have dropped a motorcycle onto its side at some point. We hate to admit it, as proven by a show of hands (or lack thereof) during a presentation at the Harley-Davidson booth at New York IMS. This presentation demonstrated that anyone, regardless of what they ride, could pick up a dropped motorcycle, and that anyone, no matter who you are, can do it.

IT HAPPENS TO THE BEST OF US

The victim here is a Harley Sportster. While among the smallest bikes Harley makes, it's still bigger and heavier than many bikes. You'd have a hard time muscling one upright, unlike a Honda Grom. It was a great choice for this demonstration, being big enough to require the proper technique but not being too heavy, either. Don't worry, the entire area was carpeted to prevent damage to the bike, and all of its fluids were already drained to prevent a spill.

First, make sure the engine is switched off. This may seem obvious, but we're often a bit disoriented after a crash, and may not be thinking entirely clearly. If the bike has fallen on its right side, put the kickstand down. It'll look silly like you just put up an antenna on the dropped bike, but it'll save you if the bike tips too far the other way after you've picked it up. Similarly, make sure the bike is in gear so it won't roll away on you once it's back on its wheels. Either of these could drop the bike a second time, which would make you look pretty silly.

Next, sit on the edge of the seat as far forward as you can. Grip the handlebar in your left hand and somewhere solid with your right, then walk the bike backward. At no point do you actually lift with your arms or back. Brute strength is not required. You're levering the bike up, and using the strongest muscles in your body, your legs, to do it.

Keep walking the bike backward until both wheels have touched the ground. The bike will still be at quite an angle when this happens, so you're not done yet.

Slide your posterior onto the seat, readjust your right hand if you need to change your grip, then keep pushing with your legs. In the case of a taller bike, you may need to slide your butt off the seat to the near side, which you can then use to keep pushing the bike up. Keep walking backward with a firm grip on the bike, and before you know it, it will be back in its upright locked position.

You may have noticed that the person presenting this demonstration is an average-sized woman, not a big tough manly man. She doesn't have the strength to lift the bike, but could not only pick it up using this technique, but she also did it with so little effort that she could narrate the entire process. Then, just to drive the point home, she gently laid the Sportster back down, chose the smallest woman she could find in the audience, then talked her through picking it up. Although she was small, she had no trouble levering the bike back onto its kickstand.

The message here was absolutely not "women are bad bikers, here's what to do when you crash." On the contrary, it was a very positive, empowering presentation. Perhaps after seeing this, woman riders will feel more confident heading out for a ride alone, without worrying that they won't be able to recover from dropping their bike themselves. Who needs a man, anyway? But the technique will work for anyone. I'll certainly be keeping it in mind for the next time my bike takes an unexpected spill.