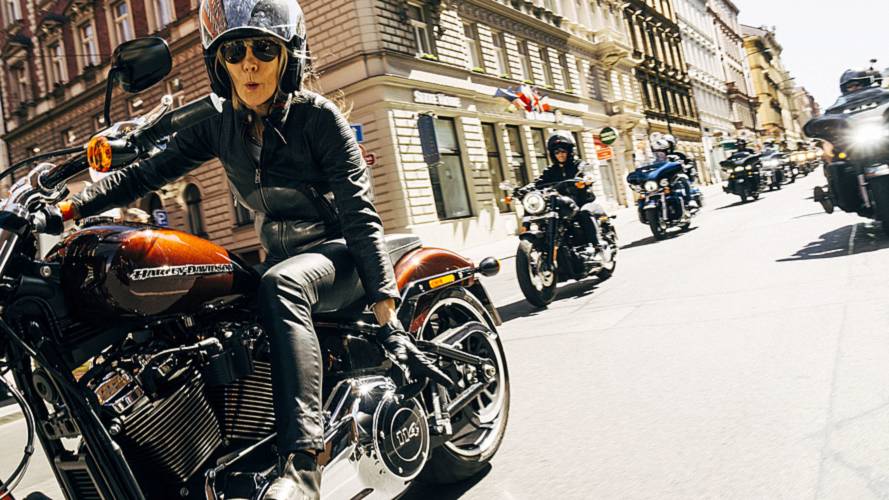 So, the Big News this week involved Harley-Davidson, a handful of very surprising bike prototypes, and ten million pounds of sludge hot takes from our colleagues in the moto journalism biz. As everyone else was flipping out about the Pan America and the Streetfighter and the new engines and everything else—which, honestly, are very flip-out-aboutable—we noticed some very interesting, non-bike-related stuff buried deep in the press release.

WE HAVE: Harley Finally Enters the 21st Century with Big News

Down there beneath the "New Products" heading, mixed in among "Stronger Dealers"—I'll talk about that one later—and "Funding and Financials" is a little section entitled "Broader Access". There are three small bullet points under "Broader Access", and it was these that really caught our attention. Well, two of them did at least. The first one is all about improving customer experiences across all the company's retail channels and, despite the very dense corpspeak in which it's written, we totally get that one. What we don't get are the following two:

This is rad and all, but what's all this about e-commerce?

Huh. HUH. Those are interesting, those are very frickin' interesting, man. Neither Kanishka nor I could make heads or tails of them. E-commerce? Urban storefronts? How's that going to work? Since we're really real journalists around here and not a bunch of idiots on the internet, we reached out to Harley for clarification. The response was, essentially, "We're not at liberty to comment. Stay tuned." Well that doesn't help us write a story. That doesn't help us at all. We were kind of stuck at that point, so we decided to do what any moto publication worth its clicks would do—baseless speculation!

Okay, let's break the first one down. "Establishing strategic alliances with global leading e-commerce providers." Right off the bat you have e-commerce. Harley already has a pretty robust storefront on its website, and that website has a global reach with its various foreign... language... sites. So, what are we talking here? What does Harley need with "global leading e-commerce providers"? Just a strategic alliance to help get products in front of new customers, or is it something bigger?

A RIGHT: Let’s All Tell Harley-Davidson What to Do

Look at this second part, "to extend access to Harley-Davidson to a pool of millions of potential new customers". Now, that could just be branded t-shirts and jackets and stuff, but what if—stay with me now—what if it's bikes? What if this is talking about selling bikes directly to customers via a website in countries where dealer coverage is poor or nonexistent? That'd be pretty revolutionary. Imagine ordering a brand new Road Glide on your phone and having it delivered to your farm in, like, Mongolia or something. Pretty cool, right? No, I'm not saying that's what's going on here, but what if it is?

Imagine just ordering this on your phone and it shows up in your garage a week later.

Now that we got that out of the way, on to the second point. "New retail formats—including smaller, urban storefronts to expose the brand to urban populations". Oh really? What, exactly, is this about then?

Well, I'll tell you what I hope it isn't. I was in Alaska recently, and while walking around little places like Ketchikan and Skagway (Skagway rules, by the way) I noticed small official H-D storefronts. Turns out these places are just there to sell t-shirts to cruise ship passengers and not like, you know, actual bike shops with bikes inside. At least not that I saw. They weren't cool at all. In fact, they were square as a box, especially since they were usually shoehorned in between jewelry stores and places selling cheap trinkets to tourists.

Please, please Harley, I'm begging you, with tears in my eyes, don't let it be this. I love the idea of "urban" storefronts, especially since I live in Detroit and the closest Harley dealer to me is something like 20 miles away in the Western exurbs. Well, I take it back, there's one even closer but it's across the river border, in Canada, which presents its own set of problems. Anyway, what I'm saying here is there isn't a dealership in the city itself, which is hard on the city's Harlistas. The "urban population" knows full well what and who Harley-Davidson is. What people need is a place to actually go that caters to their needs and the (motorcycle) needs of the community.

More like this, but with more bikes. (Courtesy Clutch and Throttle Detroit)

TO KNOW: The Weird And Wonderful World of Non-Harley Harleys

What if these "urban" storefronts were actual, you know, bike shops? Put 'em in cool old buildings, fill 'em with city-appropriate bikes—Sportsters, Streets, those new bikes Harley's talking about like the Streetfighter—maybe put in a lounge with a coffee bar, and no goddamned classic rock or neo-country on the radio. Since the storefronts are supposed to be small there probably wouldn't be any service department, but you could still sell parts. What I'm saying here is that people like destinations, and people who live in cities like their destinations a little different than those found out in the suburbs. Make a place, an actual destination, and people will show up. Oh, and make sure to hire people from the community the shop is in so you don't look like a pack of squares or interlopers.

So, there you have it. Those are my thoughts on what Harley's plans are and/or should be. What about you all? How do you interpret these bullet points? You think cool things are afoot? We sure hope so.