A Few Minutes With: Jeremy Toye 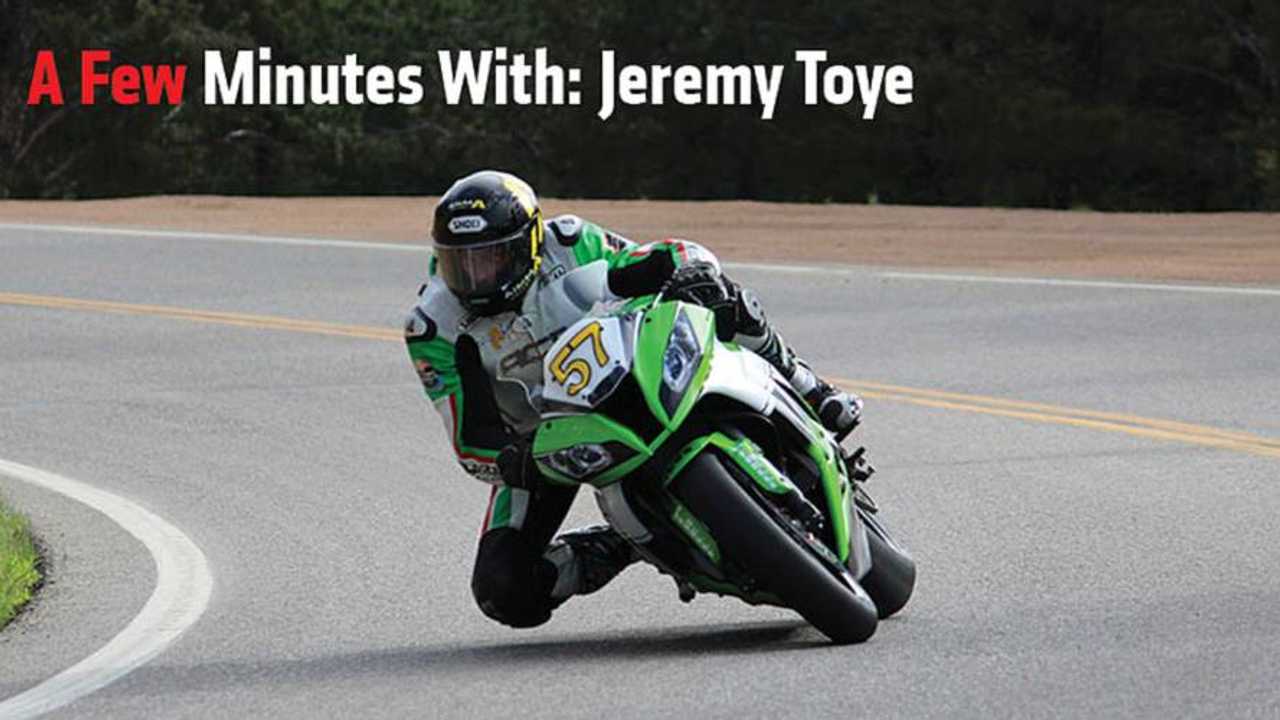 We had a chat with the 2014 Pikes Peak International Hill Climb Motorcycle Open Class winner, Jeremy Toye, to talk about his experience and his future.

This year's Pike Peaks International Hill Climb Open Class winner thought he left way too much on the table and thinks he wasn't fast enough. This man has high standards as he was faster than the capable and experienced Ducati factory team, on only his first trip to the mountain. Jeremy Toye you're the man.

Jeremy built his 2014 Kawasaki ZX10 himself with help from his mechanic of 8 years, Jody Scheuring who built and tuned the engine. Technically a new class for this year, only the second the entire track has been paved, the Open Class allows for full fairing bikes and saw competition from Ducati, Yamaha and other Kawasakis.

Jeremy Toye has run the Isle of Mann twice and races AMA Pro SuperBike class normally. Until recently his day job was running his performance shop of 16 years in San Diego, California, Lee's Cycle. Around the time of Pikes Peak he sold his shop and set out for a new venture, but isn't exactly sure what that is.

We caught up with him at home with his 3-year-old and 16-year-old to talk about how he managed a win after crashing in practice and how winning isn't good enough.

RA: Your first time to Pikes Peak and you won? What was that like?

JT: Obviously you go to a place or race and your racer mentality, you expect to do well, and run up front, but that place is so different. It's pretty challenging and we made extra challenges for ourselves. Winning at the end of week was exciting.

JT: We crashed during qualifying. Falling off at a place like that doesn't bode very well. There's probably only a handful of turns you can go off comfortably-I mean as comfortably as your going to on a bike-most of them will end your weekend and sometimes end a lot more. We were lucky and thankful to go off on a turn that had an air fence.

RA: So what happened? What caused the wreck?

JT: Basically we were changing our set up, testing different chassis and suspension parts and not having any background of Pikes we were just trying new things. For the upper section, it's a lot of quick switchbacks and you don't load the chassis very much. You set it up soft for the top. When we went to qualify, they used the lower portion of the track. It was our first run at speed and we had some good competition, so we were going for it. The forks were a little too soft and we lost the front going into the fastest section of the track.

RA: You used a backup bike for your qualifying run, but did it mess you up physically or mentally?

JT: I re-injured my knee, prior motocross training incident with my knee that I had only just bounced back from. It doesn't allow me to bend my knee great. That was a major set back. We did all the preparation that we possibly could, elevation, ice, exercises. I was sitting with my knee above my chest, until the last minute. I had to get out of the seat once in a while just to perform downshifts, they were very difficult for me and I'm concentrating that I'm not running off the road again. You kind of put the pain in the back of you head and go for it.

JT: If it were a short circuit normal road race, I'd have a normal physical training routine to make sure my muscles are firing at 100 percent. I bring up the aggression level in order to go faster.

In a race like this you need to be focused and calm. My training is similar, but i normally have my iPod in with R&B music or something playing where i can be mellowed out to get me calm and focused for this race.

Aggression level a little calmer, because in a normal race, you've got 20 guys fighting for the same corner, you need to be aggressive to hold your spot. At Pikes or Isle of Man, you're racing yourself and if you go in aggressively you might find yourself on your head. It's dumb to be aggressive and fight with yourself. You'll get hurt.

RA: How do you manage a coarse you've never been to before? Are you able to memorize corners, speed, etc.?

Read the answer and what he plans next year: here

JT: In the grand scheme of things, it's really not that long only 10 minutes, but the amount of turns is massive. Same for Isle of Man. I got the video game and played the sh*t out of it. Until I was sick of i. It prepared me for understanding the turns, but in a game it's not natural speed. It'll show you left rich, left right, but you're not going to feel the road, its surface, condition, where to apply speed or the Gs.

RA: So, were you able to pick up a lot of things from practice?

JT: When I got there I was confident where I was going, but applying where I'm going and then getting two inches from a guardrail at speed, it kind of breaks your concentration. The top is bumpy and really rough, but you don't experience it until you get there. You have to pick your way through the mind field in a way.

RA: How was it running against big teams like the Ducati guys?

JT: We were a little bit smaller by numbers, but I felt confident in our preparation level was equal or greater than anyone there. When I crashed the bike I was able to jump right on a back up and qualify. Our crew consisted of me and two mechanics from Kawasaki and then Jody Scheuring, my main guy.

JT: I just resigned from it being my shop. This Pikes Peak deal, at the time, was my job. I've owned a performance shop for the last 16 years. I decided to try something else and get rid of the shop and start a new venture, time for a change and starting it off with a win at Pikes Peak, doesn't suck.

JT: A 2004 supercharged BMW M3, it makes me smile, good balance, smoke the tires once in a while.

RA: Are motorcycles all business for you?

JT: It's always been the two reasons race each other on the side. i started in the motorcycle industry because I liked riding bikes. Once i started racing i got into the technical side and figuring things out. In the last few years, when the economy wasn't nice to the industry, I really took that side of it. My mechanic and I will go to the track to experiment. To keep it fresh and keeps learning, I love racing, but i love the technical side too, that's hand in hand. We've designed a lot of parts for the ZX10, I was lucky enough to do that. That's just as fun to me as racing.

RA: Tell me about the bike. You built it yourself with help from Jody who built the engine?

JT: Yes. The bike started life as a stock 2014 ZX10R and for the most part, it's still fairly stock. What we paid attention to was cutting weight with carbon fiber wheels, and titanium and aluminum hardware. It weighed 362 pounds after it was rolled off track. .

The next biggest thing was motor. A lot of people worry about horsepower at Pikes Peak. It takes a good motor, but not just out-right horsepower. Joe Consumer can buy a sport bike and drive off lot with 180-190 hp, in the grand scheme that's . Our real focus was to make a friendly, usable power that was able to get off turns well and get through the altitude. We changed cams, upped compression and port and polish. It's still producing 190 hp, about 10-15 down from the show circuit motors, which are a little over 200 hp.

It was so friendly and easy to use. You could spend extra attention to dealing with the road and not the motor. Other guys were fighting a monster in the motor to get the power down. That's one thing I didn't want to do.

JT: I plan to return to re-up what I said about learning. I have to be honest, I'm happy with our results, but I'm not happy with … I think we missed the mark on set up and understanding the bike. It was so new it caught us off guard a little bit. I think we could have been so much faster. You sit there and figure things out and now, I'm dying to try them next time.

RA: Do you think you left some on the table?

JT: 100 percent, no question. I left a ton on the table. Not only bike set up, but me personally. I could grab five percent more on a dozen different areas across the board.