Ask RideApart: Past Or Present? 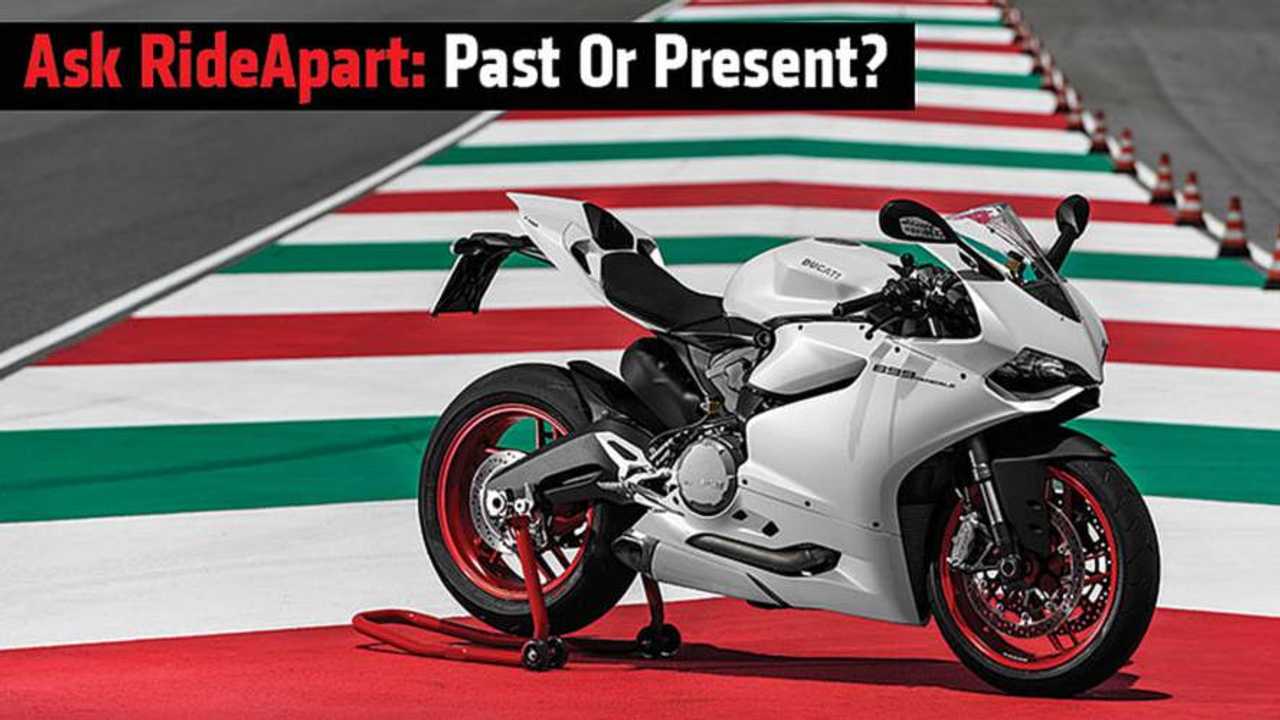 Ask RideApart: Past Or Present?RideApart Inquiry: "I am in a bit of a conundrum. I have $10k ± to spend, should I buy: 1. A new modern sport bike...

RideApart Inquiry: "I am in a bit of a conundrum. I have $10k ± to spend, should I buy: 1. A new modern sport bike (possibly a Ducati 899) 2. A 1998 R1 (red & white) & a TL1000R. Both pristine and original to the last bolt. 90's sportbikes were my motorcycling superheroes whose photos plastered my walls as an early teen. Now I have the opportunity to procure two of my favorites. Should I capture the past or keep moving forward?"- Jeremy B

Why not all three?

There are a lot of ways to address your conundrum. We’re going to simplify the issue a bit to make the answer useful.

Assuming that you’re looking to ride your motorcycle, and not build a collection of bikes, you’re probably going to be happier in the long run by getting the newest, best bike your budget allows. The past 16 years (since those 1998 bikes were built) have seen amazing improvements in sportbikes. For example, the 1998 Yamaha YFZ-R1 was rated to produce 150 hp; the current bike comes in at almost 180 hp. The new bike uses a slipper clutch vs. a multi-plate clutch; the new bike has fuel injection with YCC-T and YCC-I vs. a carburetor; the new bike has bigger brakes and a beefier suspension, and is an all-around better bike than the 1998. The Ducati 899 Panigale that you’re considering is a whole other species than the two 1998 examples that you’re tempted to buy; it’s almost a matter of taste and your personal riding style that should determine the selection.

The general question of new vs. used is another very personal decision that each rider must answer for themselves. A new bike is generally more expensive at the outset – but it can be your opportunity to buy into the cutting edge in terms of performance, technology and style. A new ride also comes with a manufacturer’s backing, and a warranty for a fixed period of time, along with unique financing opportunities. A used bike is a bit of a tradeoff. You’ll generally save money on the purchase price, and then spend time and money fixing the “upgrades” that the previous owner visited on the bike. The older the bike, the more time and distance will have taken their toll on the ride. For some buyers, that won’t be a problem. It might even be an enticement – it’s fun to tinker with a used bike and satisfying to bring it back to new condition. For other buyers, it’s the beginning of a nightmare of repairs and corrective maintenance.

We’ve answered a bunch of questions that you didn’t really ask, Jeremy. Sorry about that.

The rider’s most frequent lament: “Why did I buy that vintage bike, when all I want to do is ride?”

You have to decide if you’re a collector or a rider. There are a few lucky individuals who are both, but they are rare (and usually wealthy).

Let us know what you decide.