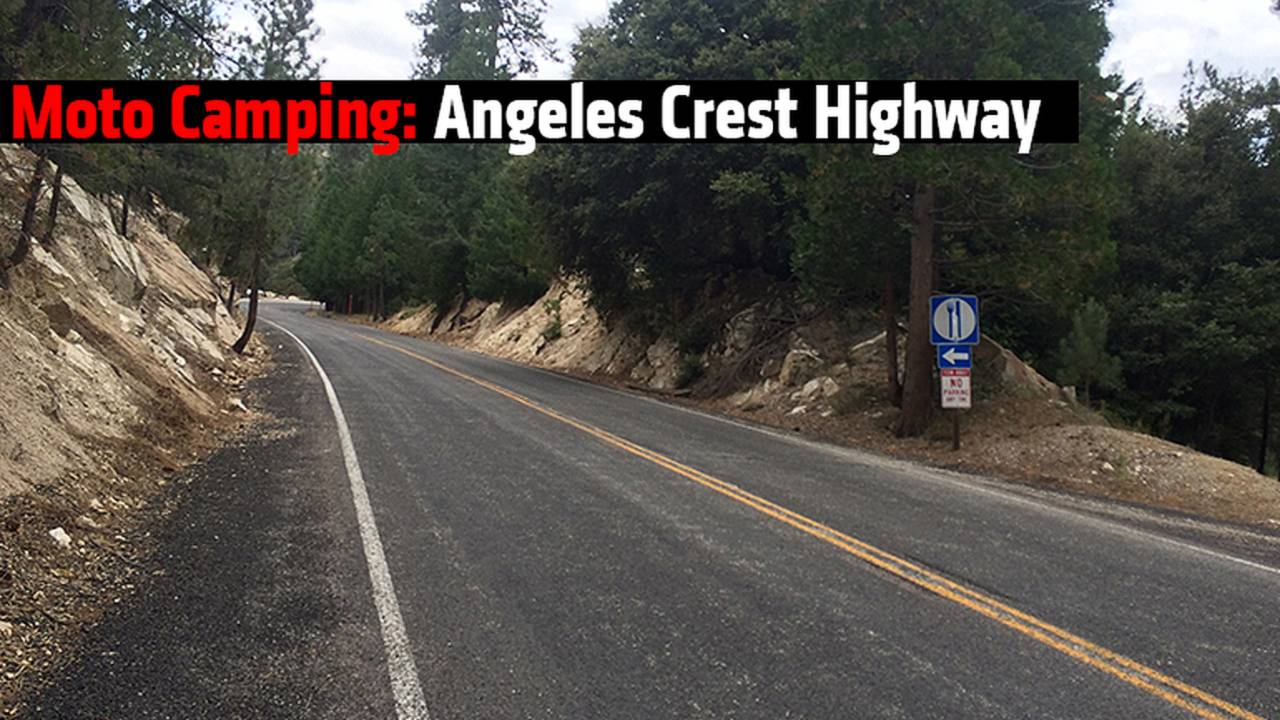 Moto Camping: Angeles Crest HighwayI've never gone camping before. Never stayed anywhere that didn't have running water. But you can only take so...

I've never gone camping before. Never stayed anywhere that didn't have running water. But you can only take so much of LA. So myself and my boyfriend set out for a weekend adventure. One tent, two people and 24hours. Moto Camping.

In January, I met this awesome man who loves all the things I love: mainly, riding bikes. He’s even helped me discover some things I never knew I’d love, like Mountain Biking. So, after months of badgering, I finally agreed to go moto-camping with him. I was finally sick enough of civilization that I wanted to get away from it all. But he was smart enough not to take me too far from civilization, as I’d never camped via motorcycle before. Or ever camped without running water. Ever.

We enjoyed a spirited ride up Angeles Crest Highway (CA HWY 2), a popular place for motorcycle riding. Instead of stopping at the typical-weekend-riding-destination, Newcomb’s Ranch, we rode right past to a campsite I’d read horror stories about on Yelp. Luckily, it was at full capacity, so we couldn’t stay there. It was way too cramped anyway. If the whole point of camping is to get away from people, why have campsites crammed into an area with the density of downtown L.A.?

The ranger told us he’d heard that a different campsite was dead that weekend, so we made a beeline for it. It was at the end of a rather badly paved road, which helps keep the riff raff out. It was not as picturesque, but far better than Buckhorn. So we parked and made our new home.

Robert loves this tent because it only has one pole, making it super light and compact for traveling. He also likes it because it’s like having a teepee. Oh, boys...

Here’s our spacious campsite, all set up. We brought a lot of that stuff into the tent at night, and Robert was off scouting on his bike, so it’s not in this picture. But I loved this campground because there was so much space between campsites.

It was deeply disturbing not having running water or even a sink where I could brush my teeth. At least Robert bought me the magenta titanium spork I’ve wanted.

Here is the view from our tent. After setting up camp, we decided to ride to Wrightwood for dinner. It’s about 30 miles of gorgeous twisties, made even more beautiful by the setting sun. The road to Wrightwood was closed for many years after one of the major fires, so we'd forgotten it was even an option.

We bought gas and water, then enjoyed a peaceful dinner in a forest town where nobody is stupid enough to play with fireworks. It was the antithesis of every LA neighborhood, which sound like war zones on the 4th.

This Givi top case has enabled me to live car-free for over a decade, even having survived a highside and falling off the back of my bike because the R1 back seat latch isn’t designed to handle the stress. It’s not only about as big as any TARDIS, but also doubles as an excellent wind guard. Robert was beyond excited over the acquisition of this new stove, so tiny it folds up into a box that can fit into that oatmeal cup.

On Saturday, we embarked on a lovely little hike along a trail, perfect for mountain biking. Robert grew up in LA and explained that this view was never so clear before. We went to the Chilao Visitors Center and played with live snakes. That was such a treat.

We also saw this little guy. I maimed one of his people on the ride back from Wrightwood. He was scurrying so erratically there was no avoiding him. Robert saw him doing his best to continue across the highway, but it didn’t look good.

Then we continued our walk a few yards to Newcomb’s Ranch for lunch. We saw the Sherriffs on their dual sports, and some guys on serious trans-continental dual sports who’d only ridden paved roads from Santa Clarita. Sigh.

After lunch, we walked across the highway, curious because a group of people had come from there. We discovered this weird little concrete bunker that had windows, yet looked like someone had tried to claw themselves some new windows on the back wall.

Then Robert noticed this house on the hill nearby. It was so strange to see a massive ruin right across the street from a place I’ve visited so many times.

The ruin we came across was actually Louie Newcomb’s homestead, the one that was destroyed in a fire in 1976. The concrete bunker was where he’d stored dynamite. It’s now public land, part of the Angeles National Forest. The restaurant’s facebook page is also great for updates on road conditions, totally worth a “like."

We were hoping to find a spring, at least, to drench ourselves in the heat, but alas, it was a typical SoCal spring in July, especially now that water is a luxury. The hike back, up about 850 feet, was a bit more tiring, and I really wasn’t up for another night of attempting to sleep on the ground.

Despite layering a down comforter and a very plush sleeping bag above it, the Thermarest I’ve heard so many rave reviews about was unbearable. To me it felt no different than the ground: rock hard. It’s fine if you’re the sort who loves sleeping on marble, but I love my Tempurpedic. (We’re researching hammock tents now, as they’d pack a lot smaller than a proper air mattress.) At least when we camp at Laguna for World Superbike, we’ll have running water!

Essential equipment (not in any particular order):

A) A good camera. I like Replay or Motocomm, because it’s more aerodynamic than a GoPro.

B) A bike light for the tent so the flashlight can wander. Robert has this Lumora LED Lantern/Flashlight that he loves. It runs on 4 AA batteries and can work as either.

C) Tools! Especially a hammer or axe for the tent spikes and pliers to pull them out when you leave. A shovel is nice to have along with Multi-tools, which are good to have for unexpected problems.

D) A solar charger. I like this Voltaic bag, because I can strap it over my shoulder and walk around all day, charging the battery, then plug my phone in at night. Although my phone was on a Mophie and didn’t need much help, Robert’s has a seriously old battery, so this was extremely useful. Sure, we were out of range and not playing with our phones, but we did use the cameras and the GPS hiking apps. Gaia was our favorite app.

E) Handy tiedowns. or bungie cords, I don’t know where I got these tie downs, but they’re great for loading stuff on the motorcycle. We loaded the tent, sleeping bag, down comforter, and Robert’s Givi bag onto the back of Robert’s Triumph Thruxton without a problem, thanks to some bungees and this one tie down.

F) Duct tape. Because duh. Just don’t leave the house without it. Sport Chalet sells it on these nifty little rolls.

G) Wipes. Especially these EZWYP because they’re biodegradable and have a very slick dispenser.

H) Waterproof matches because that campfire ain’t gonna light itself, but Robert’s snow peak stove didn’t need them. It’s got a starter button.

I) DEET-free natural insect repellent. Because DEET tastes nasty and is bad for you. This worked fine.

J) A pen, which has gone the way of the watch in this digital era. You’ll need one to complete the form on the envelope paying for your campsite.

K) MORE WIPES! I love these because they’re natural and they smell so fresh and clean. Plus it’s not a cloying perfume. 24 hours without running water was too many for this princess.

L) Twine. The neon pink variety is stronger, of course. It held our 10 lb bag of food out of arm’s reach of our furry neighbors. Robert had some training in this whole camping thing, so knew we had to hang our food out of reach, in the absence of bear-proof lockers or Bear Vaults.

M) Pocket Fuel! My favorite source of energy while on the road, it’s just almonds, chocolate, coffee and a little sugar.

How we got it there:

A) A Backpack. I like my Timbuk2 because it’s custom. Still not pink enough for me, but that center panel is reflective.

B) My beloved Givi top case. It’s survived a highside, a forced ejection, and thousands of hard city miles. It protects my helmet while I’m not riding and gets my groceries home. I don’t care what it looks like; it’s the most useful thing I own. Driving to the grocery store is for suckers.

C) A tank bag. Mine is a Givi and magnetic. I’ve had other brands, they all worked great.

D) Pads. Robert has been fine with the foam pad for years. I tried Thermarest for the first time, and hated it. Still much too hard for my tastes. Both fit easily in front of my top case and bungeed to it.

E) A backpack, again! Robert likes this Poler and uses it every day to carry his laptop to work in a Pelican case. It’s even carried a tire! He also likes the extra flap for carrying stuff, and the waist and chest straps make it more comfortable.

F) A sleeping bag. When we have the money, we’ll replace this one with a Big Agnes Doublewide or single. Something built for two that compacts to almost nothing. This was way too big. The Big Agnes is 9”x10”, the Nemo 10”x14”. But it’s prettier. And weighs half what Big Agnes weighs. I love down.

G) Is for More Givi, please. Robert uses this bag constantly and loves how easy it is to attach to either of his bikes with bungee cords.

H) My king-size down comforter. We figured we’d try this so we could sleep together, since I don’t own a sleeping bag. It was very comfy, but clearly takes up way too much space, even in the compression sack I bought for it.