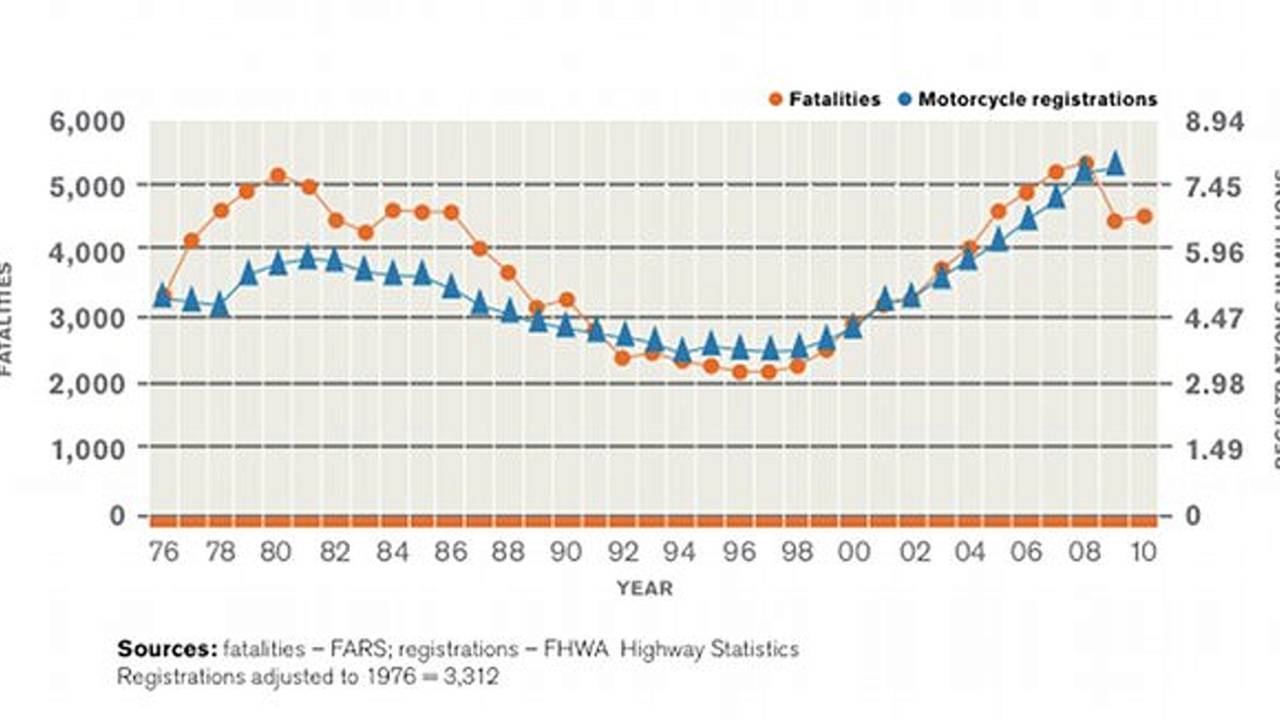 This report is an eye-opener.

Take a look at this comparison of motorcycle sales with motorcycle fatalities. Pretty strong correlation, right? The number of riders dying is determined by the number of people riding motorcycles. If that’s the case, then how it possible to reduce fatality rates?

The data comes from the annual “Motorcyclist Traffic Fatalities By State” report produced by the Governors Highway Safety Association. It forecasts (complete reporting doesn’t come in for a while) that about 4,500 motorcyclists were killed on American roads in 2011. Pretty much the same as last year. That’s remarkable because fatalities in cars are down to their lowest level since 1949. While cars are unprecedentedly safe, we keep killing ourselves in disproportion to the limited membership in our club. Why?

The report finds that increases in fatalities in some states come from factors like good weather meaning more motorcycle miles while decreases can logically be contributed to poor weather. Oregon deaths, for instance, were down, with the state reporting, “ A very wet spring; consequently, the riding season was delayed.” Again, that corresponds with the conclusion that the more riders there are and the more we ride, the more we kill ourselves.

This theme is continued throughout the report, with various justifications for increases or decreases in sales and therefore fatalities blamed on economic and societal factors like fuel prices or dealers closing or economic stagnation.

Other changes to fatality rates are attributed to anomalies like legal loopholes. Indiana, for instance, saw a dramatic increase in moped fatalities, noting that riding a moped there requires neither a license nor a helmet.

The report also addresses the safety implications of states like Michigan repealing helmet laws. “Since 1997, seven states have repealed their universal helmet laws, most recently Michigan on April 12, 2012,” notes the report. “Repeal bills have been introduced in five other states in 2012. no state has enacted a universal helmet law since Louisiana reinstated its law in 2004...helmets, when worn, prevent 37% of motorcycle operator fatal injuries in a crash and 41% of passenger fatal injuries.”

A direct correlation between motorcycle sales and fatalities is bad news for motorcycle riders. It highlights that we’re the problem and that we’ve been unable to address the issue as an industry through training or other efforts. Helmets, safety gear, brakes, tires, and chassis have all improved drastically since 1975, so why do deaths still correlate with sales so strongly?

Are lower fuel prices the solution to motorcycle safety?

“Enacting universal helmet laws in the 31 states that lack them is the quickest and most effective method to increase helmet use and reduce motorcyclist head injuries and fatalities,” the report concludes. It also suggests the following measures:

“In 2010, 29% of fatally injured motorcycle riders had a blood alcohol concentration above the legal limit of .08.”

“In 2008, 35% of motorcycle riders involved in fatal crashes were speeding, compared to 23% for passenger car drivers and 19% for light truck drivers.”

“All beginning riders should be trained in basic motorcycle operating skills and safe riding practices. refresher training can be useful for many riders who are returning to motorcycling after not riding for several years. all states currently conduct operator training courses, but they may not provide enough course openings at places and times when riders can attend.”

But we’ve known all the above since 1975 when this data began being collected and the correlation between sales and deaths hasn’t changed. In that same time period, despite a massive increase in the number of four-wheeled vehicles on the road and causes of driver distraction, driver deaths have fallen. Why? Cars are safer, it’s that simple. To make motorcycles safer will we have to remove rider control and implement safety features such as crash protection? Or, could the solution be as simple as a complete rethinking of how we approach and push rider eduction? Within the four recommendations above, it seems like the only one we, as a group, have control over. Or, we could just sell fewer bikes to fewer riders, statistically, that'd be a total success.