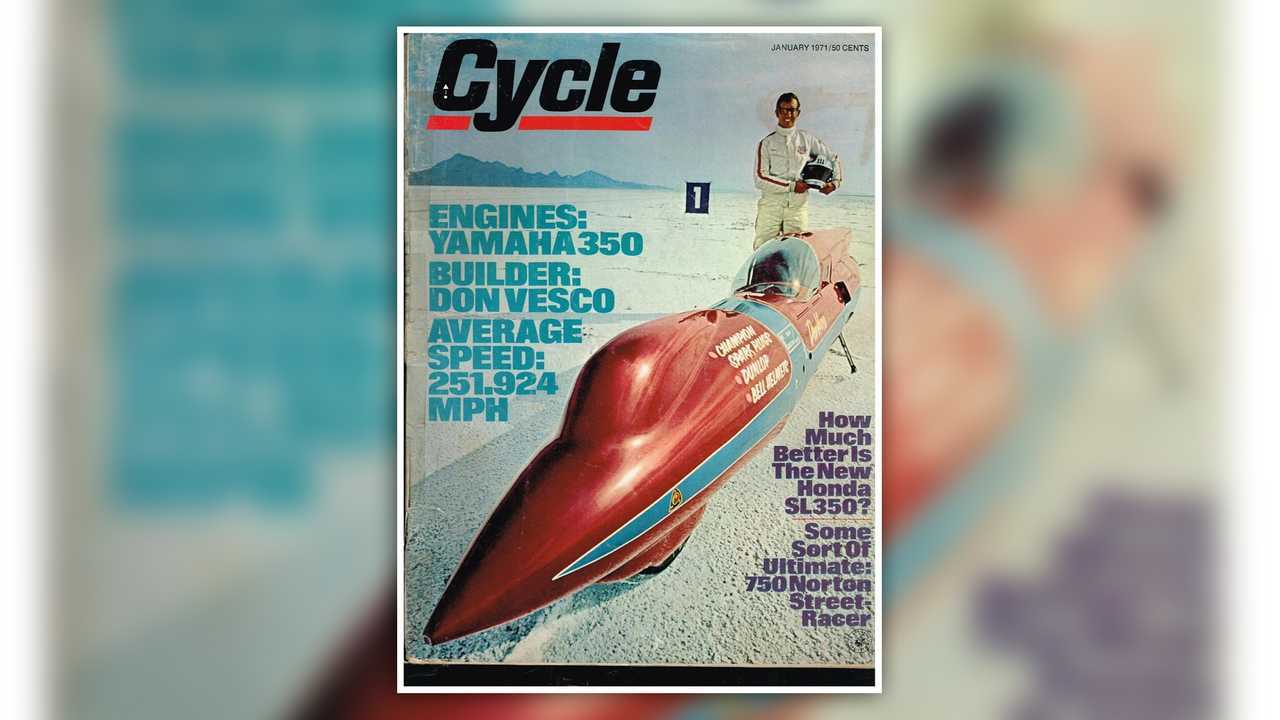 Prior to the summer of 1970, Don Vesco was not exactly a household name, even in motorcycle racing circles. So much so that in its January 1971 issue, Cycle magazine ran an article by Byron Farnsworth entitled, “Who the Hell is Don Vesco?”

The answer to the question is provided in that same issue of the magazine, starting with the image on the cover, taken by Max Gilbertson. The image shows Don Vesco posing at the Bonneville Salt Flats with his red and blue rocket-shaped Yamaha powered streamliner. The cover story headline reads, “Engines: Yamaha 350, Builder: Don Vesco, Average Speed: 251.924 MPH.”

Vesco’s cover story was news because his speed set a new absolute motorcycle world land speed record, breaking a four year-old mark of 245.667 mph set by Bob Leppan in 1966 with the double 650cc engine Triumph Gyronaut X-1. He did it with a streamliner powered by a tandem of Yamaha TR2 350cc air-cooled two-stroke twin cylinder racing engines.

And, he did it not long after crashing the streamliner at 252 mph during Speed Week in August, 1970. Vesco was on his return run after an initial down run of 240.244 mph when the rear tire blew, sending the whole rig sliding on its side through the final quarter mile at over 252 mph.

Fellow land speed racer and record holder, Warner Riley who was there when Vesco crashed later wrote: “Vesco is made of steel and cold-rolled determination.” An assessment the soft-spoken, but sublimely focused Vesco proved to be accurate.

Vesco returned to Bonneville at the beginning of October with his streamliner’s bodywork repaired and some modifications to the suspension and running gear.  During that event, Vesco made the record stick with a two-way average speed of 251.924 mph.

Ironically, Leppan also returned to Bonneville in 1970 with much more powerful edition of the Gyronaut X-1 to defend his title, but a crash at 270 mph seriously injured Leppan and ended the title-holding days of the X-1.

Despite Triumph’s exit from the record chase after Leppan’s crash, Vesco would not be able to hold the world record for long. Cal Rayborn piloting Harley-Davidson’s Sportster engine-powered streamliner to a new world record of 265.492 mph took Vesco’s place at the top less than a month later.

That last record was set with another streamliner dubbed “The Silver Bird”—even though it was Yamaha racing yellow—and powered by twin liquid cooled Yamaha TZ750 racing engines. With that record, Vesco became the first person to exceed 300 mph with a motorcycle. After the Silver Bird Don went on to establish the Motorcycle Landspeed record with the Kawasaki Lightning Bolt @ 318.698 mph, a record that stood for 12 years.

The fact that most of these records have stood for 40 to 45 years underscores just how far ahead Don Vesco and his team were as a tuners, designers, builders and competitors. To this day, Don is the fastest person to set a Bonneville record in both automobile and motorcycle, and is on the Hot Rod trophy for fastest time at Speed Week ever for motorcycle and car.

Vesco didn’t limit has competitive skills to motorcycles, either. On October 18, 2001, at the Bonneville Nationals Inc. World Finals time trials, Vesco piloted his four wheel streamliner called "The Turbinator" to the land speed record for wheel-driven cars at 458.440 mph. This was after Vesco had already set three national records in excess of 400 mph. The Turbinator had proven it could court the 500 mph mark with one run exit speed of 470 mph.

The Turbinator was powered by a gas turbine engine that produced 4,400 HP at 16,500 RPM.  Despite coming so close to the goal of exceeding 500 mph, it was not to be. Don Vesco died of cancer on Dec. 16, 2002.  Don’s brother Rick is attempting to fulfill Don's dream of going 500 mph with an updated Turbinator II.

Don Vesco was inducted into The Motorsports Hall of Fame of America in 2004 with his brother Rick accepting the honor. Don is the only one ever to be in the Motorsports Hall of Fame for both motorcycle and car. Rick has also been a successful land speed competitor, designer, builder and record holder and continues to compete to this day. Indeed, the need for speed includes just about the entire Vesco family.

Learn more about Don Vesco’s legacy of speed and the present efforts of Team Vesco online at:  http://teamvesco.com/home.html

Image of Don Vesco ©W. Gordon Menzie, used by permission and with appreciation. Special thanks to Rick Vesco and Norma Vesco for their assistance with this remembrance.