Become a Better Motorcyclist With a Piece of Rope 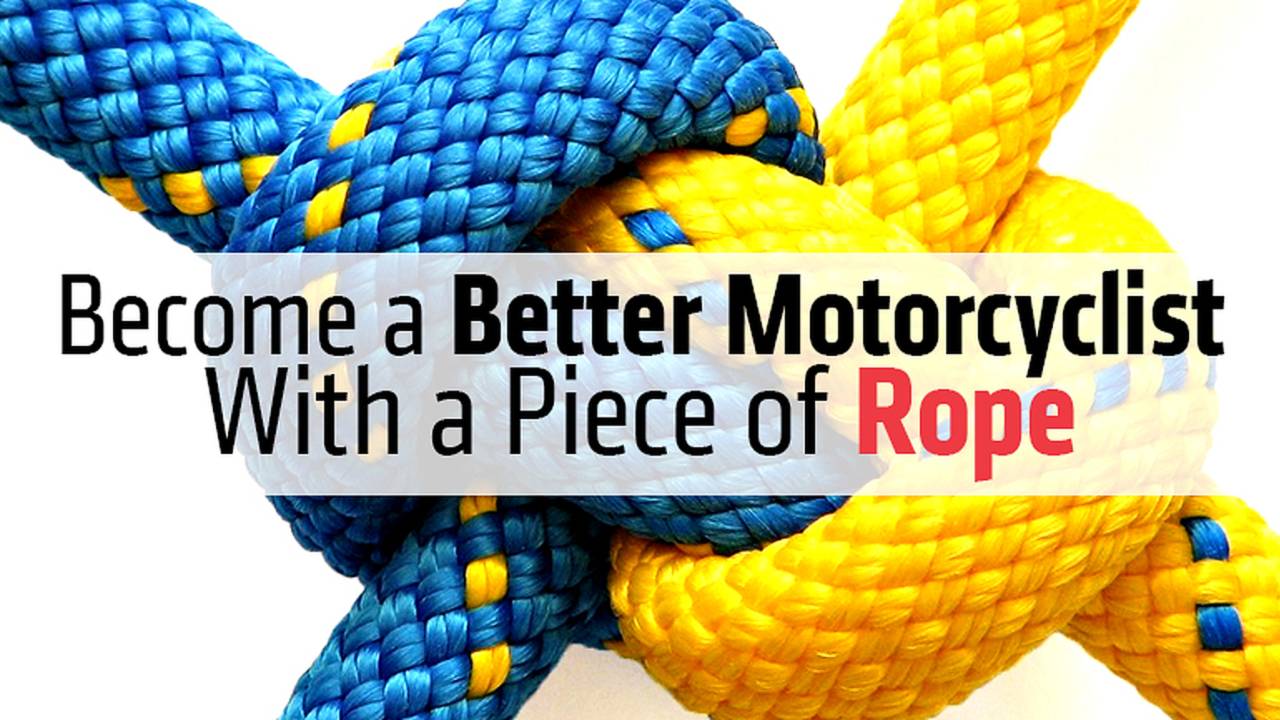 Learn how to tie eight handy knots, aimed specifically at motorcyclists. They are more secure than tie downs and safer than nets.

How do you improve your motorcycle-related skillset if you don't have a motorcycle? I found myself facing that very question over the holidays. I read a few articles about riding technique, but wanted to learn something that I could practice immediately. So I decided to learn a few handy knots.

Photos and video courtesy of AnimatedKnots.com

During a trip to Northern Michigan fifteen years ago, I crashed my 1984 Honda Interceptor while accelerating hard over a humped railroad crossing.  I had hoped to fly and impress my friend Jake (who I had just overtaken), but one big tank slapper and a block-long crash-sequence later, I was cut up and the bike was on its side.  With its newly twisted handlebars and a now-inoperable front brake, the bike seemed even more annoyed with me than I was with myself.  I rode the rest of the way with only a rear brake, and we decided to take the bike home on a trailer at the end of the weekend.  I'd expected our lack of tie-downs to be a problem, but Jake had a bit of rope and quickly tied my mangled pride-and-joy securely onto his father's trailer.

Jake deftly employed a few knots he had learned on sailboats.  His quick, unquestioning way of tying them was impressive, but all the loops and twists seemed hard to remember.  Was he sure he tied them right? How did he know which knot to use?

I was nervous that they wouldn't hold.  After all, if I'd been the one to tie my bike down, my clumsy, inquisitive knots would have loosened, and the bike would have fallen on its side. When it came time to unload the bike, the knots would have been impossible to untie.

The good news is that it won't take long to add a few basic knots to your mental toolkit.  Most good knots share three qualities: they're easy to tie, they won't come undone, and they're easy to untie afterward.  Knowing a few knots is liberating.  Rope is cheaper, and more reliable tie-downs and elastic nets, is lightweight, and is easy to find all over the world. The first two knots I learned—the bowline and the truckers hitch—make it possible to tie a motorcycle down to a trailer, and the taut-line knot is handy for securing light loads quickly without having to retie it each time.

I'd heard so much about the mythical bowline over the years that I was surprised by how easy it was to learn. It has a very specific purpose, to create a loop at the end of a rope.   It's a great knot to learn, since it won’t slip or tighten, and no matter how hard you pull on the loop it won't come undone.  It's easy to tie and untie as well, though only when the standing end is not under load.

Think of the trucker's hitch as a “winch in a pinch.” It's a rudimentary block and tackle made from rope that can be locked at the end with two half hitches.  The “block and tackle” provides a theoretical mechanical advantage of 3:1, which means that the standing end will see 3 pounds of tension for every pound of force on the tail end of the rope.  It's a very satisfying knot to tie—I struggled the first time, but as soon as I saw the little rope machine I'd created, I was hooked.

The appeal of the midshipman's hitch is easy to understand when you see it in action, and it's perfect for securing a bag on to the back of a motorcycle.  Basically, a rope loops around a tube and ties onto itself with a knot that grips the rope under tension but slides when slack.  A combination of these can be used on the grab rails of a motorcycle to secure loads without having to retie the knots each time.

Want to know which knots to learn next? Alan Grogono of Animated Knots also suggests the following knots for motorcyclists:

A) Round Turn and Two Half Hitches

This knot is for attaching a rope to a bollard, post, tree or ring.

This knot is for tying a package or other non-critical loads to your bike.

This knot is for joining two unequal size ropes.

This knot is for securing a sack or fraying rope's end.

E) How To Coil Rope

Lastly, this knot is for coiling up rope like a pro.

To learn about these and other knots, head on over to the Animated Knots website. There's more information there than I could ever hope to provide, and I hope you'll be searching for ropes—rather than tie-downs or elastic nets—next time you need to secure a bike or a bag.

What knots do you recommend for motorcyclists?