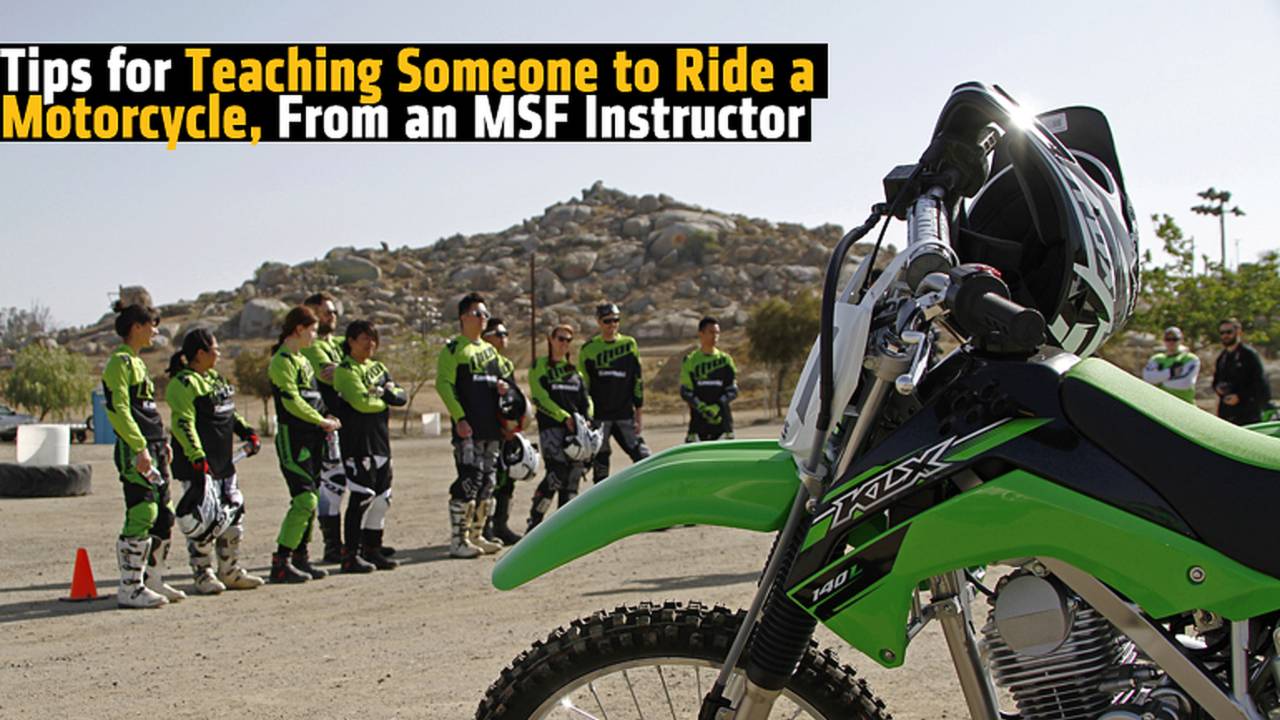 Tips for Teaching Someone to Ride a Motorcycle - From an MSF InstructorThe joys of riding a motorcycle, while personal, are not restricted to just...

The joys of riding a motorcycle, while personal, are not restricted to just you or me. There comes a time when you may want to share that joy with another. That time is now for me as I’m teaching my fiancée to ride. We started documenting her progression as she learns and as we prep her first bike (hopefully together).

She has zero experience outside of one weekend in the desert when her dad tried to teach her. After the scars from several desert thorn bushes healed, she has yet to return to a bike, until now. She’s currently working on a story from her perspective of my own successes and downfalls as her teacher.

While I trained to be an instructor many years ago in North Carolina, I'm far from a certified Motorcycle Safety Foundation teacher who works every weekend. Instead, I’m a guy with a bike and an empty parking lot. If you’re stubborn like me and want to teach someone to ride, here are some tips from a certified MSF instructor.

Note: An MSF instructor is the best teacher for someone who is new to riding and wants to get licensed. These tips are made for those who wish to encourage someone to ride, but not a final step before getting them on licensed for a street bike.

Last week, Kawasaki held their annual Learn to Ride event at Perris Raceway. Made up of mostly automotive media who wanted to learn, attendees had little to no experience riding. Running the event was Kawasaki employee, Tim Rice, who also operates School of Dirt (SchoolofDirt.com).

“I do this on the weekends because I get such a kick out of getting people into the sport and I like to get them in the right way.” We discussed tips on teaching someone how to ride motorcycles," he said.

No Gear, No Ride

Tim repeated this slogan many times throughout the Kawasaki Ride Day. Have the proper gear before ever mounting a bike. It’s good to teach new riders about how to properly fit helmet, gloves, pants and jacket. Get them in the right stuff before they ever get on a bike.

“ end up putting their significant others on a bike that’s too tall. The smaller the bike the better. Then they have more confidence. They could step off the thing if they had to,” said Tim.

Dirt bikes are always the best route to go to teach a beginner. You often don’t have to worry about damage or knocking a dirt bike over. Also, they’re light weight and have an easy to operate clutch.

The first thing you need to teach a newbie: where's the kill switch. Have them find it without looking at it. Explain to them that this is the fail-safe. If you drop the bike or want off, you need to know how to stop and kill it.

After that, begin with finding and understanding all the controls. A trainee should find and operate these without looking at them. This bad habit of watching what their doing will carry on as the riding begins. Make sure they’re not looking down as shifting or trying to see the clutch, etc.

“Don’t have them turn right away, make sure to pick an area with plenty of run off. If something happens, then they have all this room to turn the throttle off, because they don’t know how to do that yet,” said Tim.

A big parking lot or a flat field works, just make sure there's little to no traffic and it's clear of obstacles.

My personal favorite method is “clutch, brake.” You’ll be telling your trainee a lot of things that to you are (hopefully) second nature. They may want a parachute, so I begin by saying, “If you forget everything, just remember clutch and brake if you want to stop.”

One time when teaching my little sister to drive a manual car, she panicked and developed a case of target fixation on the neighbor’s mail box (pretty much like the above video). As she slowly crawled towards the object that was about to become a new hood ornament, I shouted until she found the clutch and brake. Having a simple and easy to understand panic button is a must for a newbie.

Tim started off the Kawasaki ride day by having everyone first becoming familiar with the motorcycle and its controls (as stated above). None of the bikes were even cranked until about an hour into the instructions.

Remember, this is far from new to you, but all new to them. Never assume they know something unless you specifically talk about it.

Once the bikes were cranked, the trainees left them idling for a couple minutes. They were then instructed to shut them off and dismount again (they’d already dismounted the proper way several times, leaning the bike into them and always coming off on the left side.)

When riders found the friction zone using this method, they were then instructed to walk the bike several feet feeling the friction zone pull the bike. This exercise was done back and forth through the training range. At the end of the range, they dismounted and turned the bikes around, leaning the Kawasaki into themselves (this was an exercise done earlier in the morning.)

Every exercise built off of the previous one. “Start by showing them how to turn it off, then show them where all the controls are and let them start slowly! you have to break it down into small steps,” said Tim…CONTINUE READING FOR MORE TIPS

“That’s one of the biggest mistakes we make, we think we can explain everything. We can’t," said Tim. Keep your explanations short and to the point.

“All this stuff becomes second nature only if you repeat it enough,” he said. “Don’t over talk it. You can over talk it and they try to remember every word you’re saying. It becomes too confusing. You need to get them on it and try it, that’ll teach them better than any words we could say.”

Unfortunately those closest to us are often our worst teachers. My fiancée says I’m too hard on her and that’s probably true. I hold her in high regard so I'm much more firm with her and know when she’s not listening (which happens often with me). I've eased up, but she’s also stubborn with me, but not as stubborn much with strangers... like Tim.

“It’s better and easier if you let someone else teach them. I’m not sure what it is, but there’s some sort of road block there,” said Tim. “As like when I was teaching my daughter to ride a bicycle without training wheels. I was spending forever, then 15 minutes with her brother and she’s off down the street on two wheels.”

During the event, Tim told one of the Kawasaki guys, whose spouse was also learning to ride, to get as far away as possible. He knew the pressure from him watching would intimate her and cause her to lose focus.

At the end of the day, the best teacher is a certified MSF instructor, as an individual who wants to encourage someone to ride, you're limited as to how much you can actually do.

If you’re stubborn like me and still insist on teaching them at least something, start very slow, be very encouraging and leave every day on a positive note. Don’t push too hard. If they fall, don’t force them to ride again, but do encourage them to at least mount the bike again so it doesn't leave a bad taste.

Keep Your Eyes Up

This is possibly the most important as it’s something trainees had to be reminded of throughout the day.

“When everything’s new, you’re constantly looking at what you’re doing. When you get going, you need to look froward and keep your eyes up,” said Tim.

Finally, after you teach them encourage them to read, but only from reputable sources and always look at beginner material. Teaching things like trail braking and emergency braking may be confusing for a first timer. Seek out MSF material like their handbook.

“Don’t expect them to have it perfect at any one step, just get them where they can do it. Then the repetition will get them good,” said Tim. “Let them do it more than just listen to you."

What is School of Dirt?

“I mostly see people who have never ridden before, maybe someone’s son, daughter, wife, friend,” said Tim. “For the dads they want to see if their kid will take to it without having to spend all the money, I have all the bikes and gear. I’ve got every step of the way from 50cc bikes to 140s and on. I can fit anybody and I’ve had everybody, from 7 years old to 70.”

“For people who still don’t have their bike yet, I offer a guided trail ride. The day of training is lesson after lesson, it’s work and the adventure ride is fun. They get to experience different surfaces, really get going, and learn things like how to stand on the pegs. They don’t have to figure out where they’re going, I’ve been down all these trails. That’s just a fun day. Just a pay off.”