How To Break In A New Motorcycle Engine 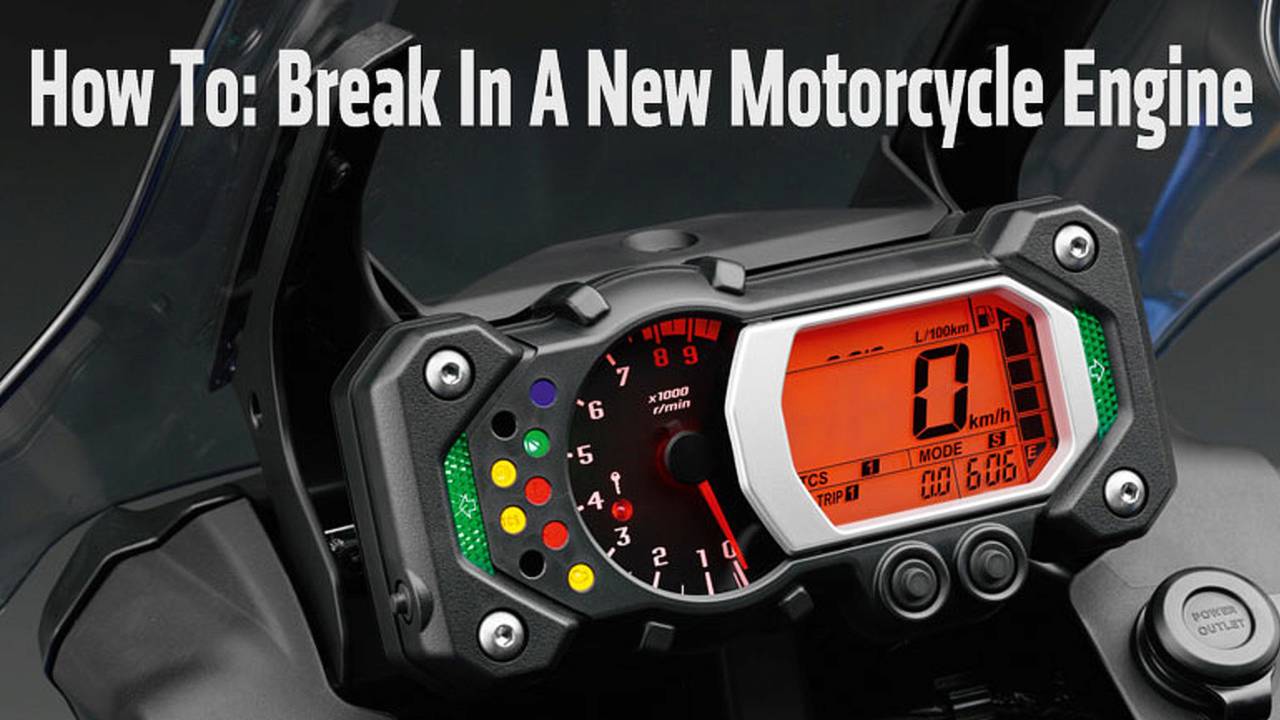 It's important to break in a new motorcycle engine correctly, or you risk impairing it's performance or damaging it outright. Here's how to do it right.

You’ve just taken delivery of your brand new motorcycle. You’ve looked at the owner’s manual, listened to friends and have heard and read a lot of confusing information about the right way of to break in a new motorcycle engine. Here’s RideApart’s take on what you should do.

Years ago, motorcycle casting and manufacturing processes meant that there were greater variances in components and how they were put together. Skip forward to today’s high-tech, computer-controlled systems and you’ll find there is now uniformity between parts and a high degree of precision in how they are assembled. This doesn’t guarantee things can’t go wrong, but modern production methods mean new engine failure is now a rare occurrence.

However, that doesn’t mean you should just get on your new motorcycle and ride it as hard and as fast as you possibly can. Some people do and swear that it makes their bike quicker and has absolutely no downside. We don’t recommend this, as all of the engine’s components need a period of running in before you start riding them hard.

The valves, cylinder bore and piston rings in a new engine all need time to wear in so they mate properly with the surfaces they interact in. If the valves don’t seat correctly against the cylinder head combustion chamber, the engine can lose compression and proper combustion. This, in turn, can lead to a blow-by of exhaust gases, which causes power loss, and compromises the reliability and longevity of the engine.

A new engine’s cylinder bore may look smooth, but it can still be somewhat rough from the machining at the factory and the piston rings need time to create a good seal. This is needed to keep the combustion gases separate from the engine oil. If the cylinder bore is not run-in properly the walls can become glazed which in turn will cause lubrication problems, leading to overheating, loss of performance and premature wear to the cylinder.

Option One: The first method is to follow the manufacturer’s recommendations found in your owner’s manual. In general most manufacturers suggest that for the first 500 miles you do not use full throttle and avoid high engine speeds at all times.

You should also avoid aggressive starts and stops except in an emergency. Don’t over rev when cold and don’t lug the engine. Always downshift before the engine begins to struggle.

We don't recommend, as some people suggest, riding a new motorcycle at a constant speed for long periods of time. We think it's better to use the rev range, including short intervals of high revs. One of the worst things you can do to a new engine is be overly cautious with it, but you also shouldn't be running it so hard it's bouncing off the rev limiter. There's a happy medium between the two, which will work best for breaking in a new engine.

Option Two: The second method to consider is a little less rigid than the manufacturers recommend. If you live near a canyon or a race track, they are both good places to work in a new motorcycle engine. First, never lug the engine around at low rpm and don’t cruise around at the same revs for long periods of time. You should be fluctuating the revs and engine speeds consistently. It’s probably best to ignore riding on the freeway for the first 500 miles as more often than not you’ll be riding at a constant speed and rpm for long periods of time, which is not good for a new engine.

For the first 500 miles you should stick with conventional mineral oil in the engine SAE 10W-40 is the best option and if you’re not sure what oil is in your new bike change it out for this and replace the filter too. You can change out for synthetic oil at 1500 miles.

Before riding your new bike make sure you have read the owner’s manual to see what specifically the manufacturer recommends. Check the oil level is correct and start the engine, but allow it to reach proper operating temperature before actually getting on and riding off.

Try and find a road with light traffic and a place where you can actually open the bike up a bit, at least in the lower gears. Make sure you vary the engine speed as often as you can from the low mid-range to the upper mid-range for around 20 miles. Essentially you’ll want to be in first 1/3 to your mid rev range. For example, with a bike which red lines at 15,000 rpm you need to be fluctuating between 4,500 to a maximum of 7,500 rpm.

After 10 miles, stop the bike and turn off the engine. Let it sit for 20 minutes and then start it back up again. Then continue with how you have been riding previously varying the engine speed in the low to mid range, but this time raise the rpm to 8500rpm and try to use engine braking as much as possible.

Some people recommend changing the oil on a new motorcycle after that first 20-mile ride. Then again at 50 miles and at 200 miles. You can choose to do that. There’s no harm in doing it but it’s time-consuming and costly. The most significant point is to change a new motorcycle’s oil and filter at 500 miles.

With the running in process you should try and follow what you did on the first ride but increasing the amount of miles you do, still stopping for a short while in between and each time adding 1000rpm to the rev range and more importantly consistently varying the engine speed and revs throughout.

At 500 miles you should change the oil and filter when the engine is still warm but not baking hot. Inspect the oil for any metal debris. Don’t be alarmed if there are some metal flakes as this is perfectly normal. Once you’ve passed the 500-mile mark you can start heading out on the freeway but still mix your ride with plenty of street riding too.

At 1500 miles, change the oil and filter again. You can opt to use a good quality synthetic oil that’s appropriate for your engine and weather conditions where you live or if you prefer stick with a mineral oil. It’s at this point that your new engine is considered to be broken-in. Now just get out there and ride that bike.

There are no hard and fast rules here. As with most things it’s a case of common sense. Read the owner’s manual. Understand what the manufacturer recommends and take your time breaking in your new bike.

Have recommendations of your own? Share them with us below.

Ask RideApart: How Do I Start Riding a Motorcycle

How To: Get a Motorcycle License

How To: Buy A New Motorcycle