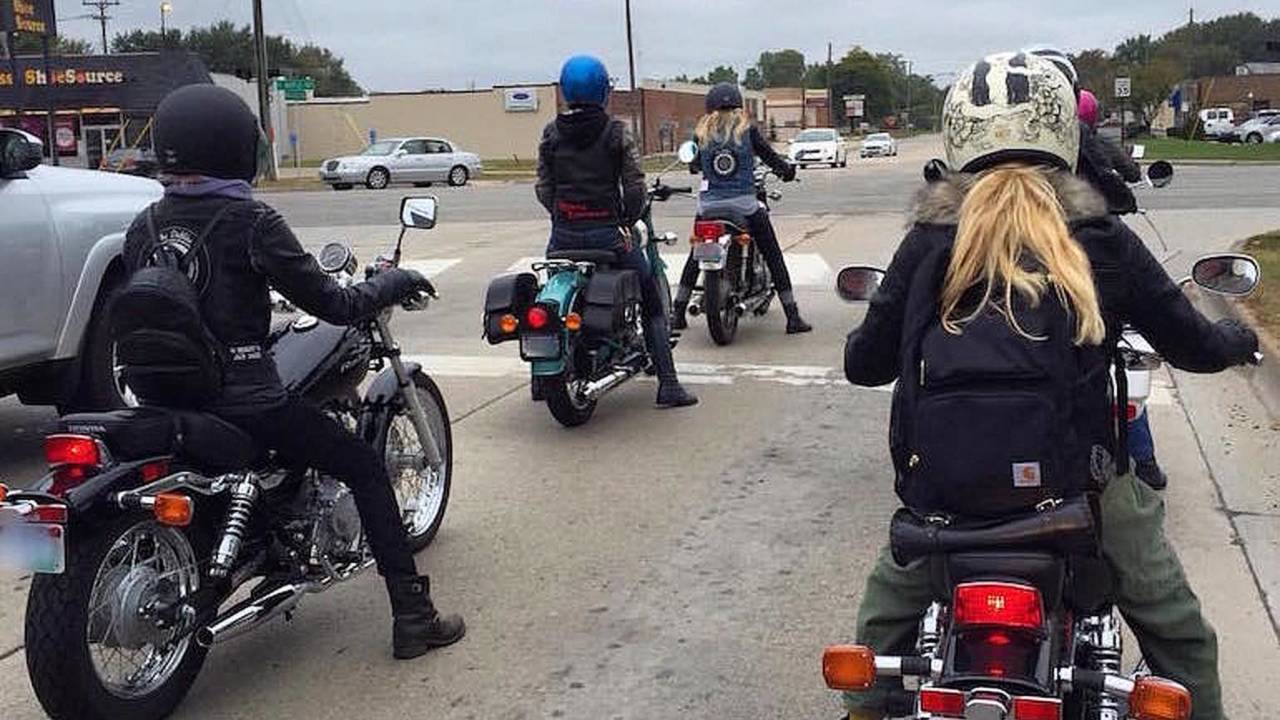 Meet the one of the badass ladies behind the up-and-coming all-women motorcycle club, The Dahlias.

I love the sense of camaraderie that comes with being a female rider. Finding solidarity is not only personally rewarding, but also necessary because we are such a small segment compared to our male counterparts out there.

Because we're so small, it’s good to have clubs/groups that support women riders. This is incredibly important because at times women are more wary to ride in a co-ed group for various reasons: it can be because they are shy, timid, not confident, etc. So, it’s good to have these all-women’s groups to empower women to not only ride, but to ride frequently. It's also a way to make new female riders, who already feel uncomfortable starting out on a two-wheeled vehicle, to feel comfortable in their discomfort. It's a good gig to be a part of.

In the process of getting my blog up and running, I created an Instagram. I started following women-focused moto rider blogs and I got a follow by The Dahlias. I was intrigued by the description:

“A group of women from Metro Detroit who love riding motorcycles and inspiring other women to do the same! Come join us! thedahlias.squarespace.com”

I went over to the website, watched the video (see below) and instantly fell in love with this group. Simply by viewing this video, I could feel the energy, excitement and passion that these women had for riding motorcycles.

The Dahlias from iron images LLC on Vimeo.

It also looked like they had a decent-sized rider base, but I didn’t know for sure. I also saw that they had a chapter in Portland, Oregon, but when you clicked on that particular link, there was nothing. I immediately wanted to learn more about the group so I reached out and received a quick response from founder of The Dahlias, Hayley Suder (whose bubbly personality shines through via email, which is awesome). She answered everything I wanted to know about this up-and-coming all-women's riding club.

The Dahlias Q & A

Laura Llovet:When and where were The Dahlias created? Take me through process from the idea to the execution of putting together this all-women’s motorcycle group/club.

Hayley Suder: We were created just last summer in 2015. I was super inspired by this new wave of female motorcycle riders that you see on social media—specifically Babes Ride Out! I knew that I wanted to be a part of something like that here in Detroit. I didn’t know another other woman at the time that rode though, so I made our co-founder Valerie start riding and it just kind of evolved from there! We started The Dahlias with just the two of us, made our Instagram, and right away we were blown away by the response we received.

LL: How often do you get new recruits? Also, how many members do you guys (I mean, ladies) have?

HS: We get people emailing us pretty regularly about joining up. We have 17 members in our Detroit chapter and growing everyday!!

LL: Has anyone ever seen you all and decided to learn to ride/buy a motorcycle because they thought you ladies were just the raddest thing on the road?

HS: One of my favorite things about The Dahlias is the messages and comments I receive from other women saying that we’ve inspired them to start riding. I absolutely love that! Our mission is to inspire other women to ride! So we love seeing that. I think that’s also why we stand apart from other female RC’s because we accept anyone 18+, any bike, any experience level.

LL: Looking at the website, it looks like you guys are primarily based out of Michigan; however, there looks to be a Portland, Oregon group, too. Has the Portland group officially kicked off? Are you guys (again, I mean ladies) looking to expand to other areas of the US?

HS: Yes, we are based out of Michigan. We started up a Portland chapter last summer, but it’s still in the works. We definitely plan to work with them more this coming year. We get lots of comments from women saying that they wish they had something like The Dahlias where they lived. I’d be open to starting a chapter just about anywhere if it means empowering and inspiring other women!

LL: How do others perceive you? Do you ladies get a lot of attention when out and about? Or do people not really say anything?

HS: We do get a lot of attention when we are all riding together. It’s a little crazy sometimes. I’ve had people actually get out of their car in the middle of the road to cheer us on! We get catcalled A LOT, which is super annoying too. We’ve had a lot of support from our community and for that we are so incredibly grateful.

Make sure to stop by The Dahlias website if you're in the area and are interested in joining the group.