Those Who Race Together, Stay Together: A Women Who Ride Profile 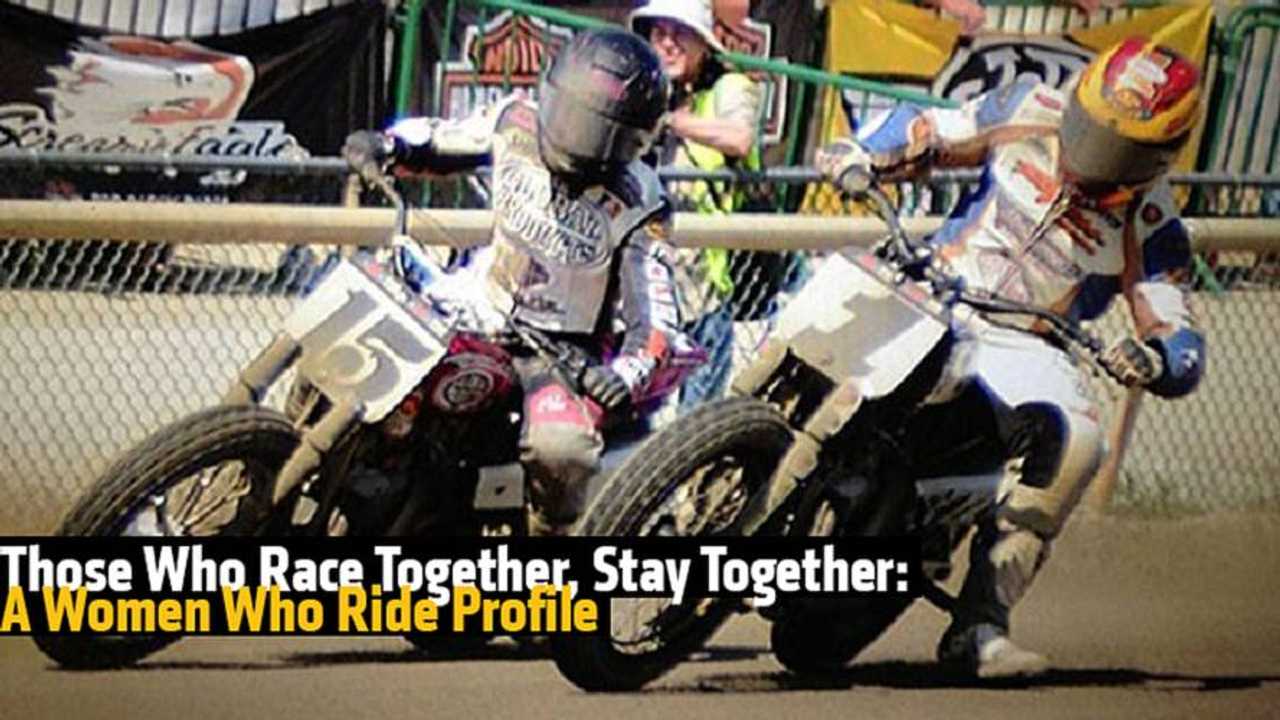 Those Who Race Together, Stay Together: A Women Who Ride ProfileWhen it comes to finding women motorcycle racers who are competing on a professional...

When it comes to finding women motorcycle racers who are competing on a professional level, the field is still incredibly scarce. It’s still not a sport that's promoted to little girls, which is pretty much required (not always) in order to get the next level. Kids start riding soon after learning how to walk, and it’s usually a male figure, such as good ‘ol dad, who gets them into the sport. Fortunately, Nichole Mees lucked out as being one of the few females to ride a motorcycle at an early age.

What makes her story even more unique other than beginning to ride motorcycles at the ripe age of four and being a AMA flat track pro, Nichole is the only woman (at least that I personally know of) that competes with her husband, Jared. Yup, she's bumping bars with her spouse, who transforms into her competitor on the dirt. Oh, and she’s also a school teacher and she absolutely loves her vocation. Yup, it seems that Nichole is pretty well-rounded if I do say so myself.

First You Walk and Then You Ride

Nichole Mees, née Cheza, is from Clio, Michigan and has lived there for most of her life. Her father grew up motocrossing and decided to get his daughter into two-wheels at  four years old by getting her a PW-50, which she began riding on the ice.  He then got her into motocross the following summer and she went to the races with him every weekend. When Nichole got a bit older, she started to do dirt riding and she told me she just completely fell in love with it.

“I actually did motocross and dirt track riding at the same time. One day I’d do motocross and the next day I would go dirt tracking. I did this for a long time—for as long as I can remember—as an amateur,” she said.

Eventually, it got to a point where her dad told her that she was performing at a level where it cost too much money to do both, so he asked her to pick the one she enjoyed doing the most.

She started professionally racing in 2004. Around that time she competed in a Pro Sport Class series in Ohio and Canada, and she consistently finished in the top three. And on 7/7/07 (lucky numbers!) she entered select AMAPro Guard National Twins races where she earned her two top-20 finishes.

The Way to a Man’s Heart is by Passing Him

She first met Jared when they were both around 10 years of age at the Grand National Championship race where amateurs from all 50 states flocked to central Illinois to compete for a week straight before a champion is crowned at the end. She said she saw him every year for that event.

“We just started hanging out after races more. One day, he called us up one summer and said, ‘Hey! There’s a race in Michigan can I come stay with you guy?’ And my dad would say sure no problem! Ever since then we just connected and started dating a couple years later and been together ever since.”

"I beat him one time at Rochester, New Hampshire and it was actually before we started dating, but were talking on a regular basis,” she said, “and afterwards he told me, ‘When you passed me I was hoping you were going to pass everybody else.’ I ended up winning the race.”

And things haven’t changed now in regards to the two going against each other. Nichole and Jared race the Harley-Davidson XR750, both competing in the GNC1 Twins races. Sometimes during the qualifying races (known as heat races) they will run together. After the heat races, the field is narrowed down to a total of 18 riders for the main event, so they typically race against one another there.

Source: Todd Boone. Caption: “Pretty cool that the AMA recognized Jared Mees Racing and myself for being the first husband and wife to race on the circuit against each other!#racersatheart” via Nicole Mees Racing Facebook page.

Nichole, unfortunately, suffered a leg injury in 2014 during the last race of the season. Fortunately, however, she’s pretty much healed to 100 percent.

“I was able to get surgery right away and I had plenty of time to heal over the winter time and got to do a little bit of ice riding. I've done a ton of physical therapy and have been back in the gym. I’ve also been back on a motorcycle regularly. I feel better than I ever have in the past going into this season, so I'm really excited to see what the season brings,” she said.

Nichole’s first race in 2015 will be at the Springfield Mile, which is also the site of their wedding that happened back in 2013. I personally think this is the raddest site for a wedding EVER!

This is definitely going to be an interesting year for Nichole, mainly because this will be her last season racing full-time…

Nichole says there isn’t one specific reason as to why this is her last season, but it’s a culmination of things. She’s taken a big interest in teaching so she mentioned she’d like to focus on that. She currently teaches high school special education and enjoys it because it’s a change and it’s also rewarding. I asked what her students thought of her being a pro AMA racer.

“A lot of them don’t realize the level that we do it at. I’ve had a few find my website and things like that and that’s when they really get into it. And they’re like, ‘Wow! I can’t believe you’re doing that.’ We recently got invited to the X games and some students picked up on that and are definitely excited about it.”

Jared supports her decision 100 percent and even mentioned that if she still wanted to race a few rounds at her favorite tracks, she should go for it. Nichole said that’s a possibility, but in the near future change is evident.

READ MORE: When You Fall Off the Horse, Get Back On: A Women Who Ride Profile | RideApart

“Racing has been great to me for over the last 10 years or so and I’m just ready to pursue new things. Luckily Jared will keep racing so I’ll still go to all the races and enjoy them. The first few races will definitely be tough to go sit and watch. They say once you're a racer, it’s in your blood, and you’re going to keep doing it forever. I’m still going to ride and train and do stuff I enjoy, I’m just going to take it back a notch from the competitive side of things,” she explained.

Being the Best of the Best

“That’s the cool thing about this sport. The guys don’t look at me any differently. If they had to bump me out out of the way or take me out or whatever, they are going to do the same thing to me as they would their male competitors," Nichole said in regards to her career flat track racing, “and if I win races or do well in races they will congratulate me as they would their male competitors. It’s totally a cool atmosphere and a family atmosphere.”

Nichole said that for a long time she was one of the only females in the circuit. She did mention that last year another female racer came up from the ProSport ranks—Shayna Texter.

“It’s nice that there’s somebody I can go to to talk about something that is different for us compared to the guys due to our smaller stature. She moved up to the same class as us last year. So I’m excited for her to see how she’s going to do and see if she’s going to continue with it for a few more years,” Nichole said.

There’s also a gal named Molly Terry that’s moving up through the ranks and Nichole is excited to see a few more ladies racing.

“When I was growing up there really wasn’t a whole lot of females and now that we go to some of the different amateur races on our off weekends, we are definitely starting to see a lot more females out there competing in different classes. So it’s great to see them out there. Hopefully we’re inspirational for those guys and they keep doing it whether they go to the pro level or just stay at a recreational level.”

As for her goals for her final year, she expressed that she definitely wants to make 2015 her best season yet. She’s been training and working very hard, and hopefully it will all pay off so she can exit on top.

“Of course every racer wants to win every race that we enter in, but my goal is to finish in the top 10 in every race and hopefully we can get a couple of top 5 finishes and maybe even a podium finish would be great to end the season and my career in racing. I’m just looking to go out there and have fun and kind of have no stress, no pressure and see what we can do.”

To have fun—that’s definitely what racing is all about.

Check out Nichole’s website here, and if you’re in the Illinois area also check out her first race of the season at the Springfield Mile happening on May 24th.