A Few Minutes With: Molly Terry 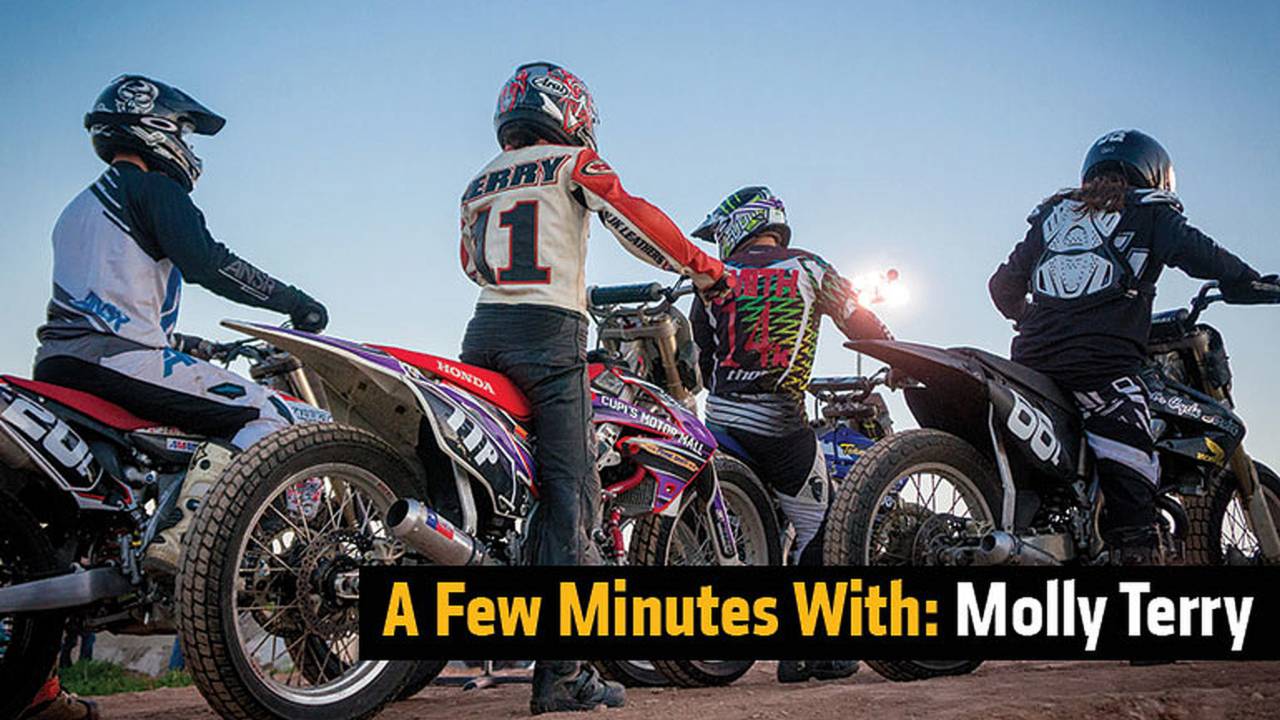 Last week I caught up with 18-year old Molly Terry of Creve Coeur, Illinois, to chat about a landmark event in her racing career. In addition to the excitement of Henry Wiles’ epic 10th win at the Peoria TT, Molly Terry became the first woman to qualify for the Pro Singles main event. Molly races as #11 in the AMA Pro Flat Track Pro Singles circuit.

Molly’s interest in motorcycles seemed inevitable. Her dad raced motocross, and by the age of six her family bought her an XR50. She took an immediate liking to motorcycles and began racing in the AMA amateur circuit in the same year. When she aged out of the league at 16 years old, she received recommendations to move up to the Pro AMA Racing and has been racing that for the past two years. When I asked her what riding she does beyond flat track, she told me that she also does motocross and ice riding.

Molly has been racing a Harley-Davidson XR750 and a Honda CRF450R this season. The CRF450 is what she qualified on for the main event at Peoria TT, so perhaps it is no surprise that this bike that she’s owned for six years is also her favorite bike she’s ever owned.  While Molly has only raced three races this season in the Pro Flat Track circuit (though she’ll also be at Springfield this weekend for a fourth), she keeps busy racing other local races every weekend learning how to set up her bike for each track that she goes to. Setup considerations include the slickness and length of the course, tire pressure, gearing and overall suspension. In her four races this season on the Pro circuit, she made huge strides with each track and was clearly proud of her accomplishments thus far.

This year was Molly’s second appearance at the Peoria TT. Last year she did not make the main event due to injury, but the experience left her hungry to do better this year. I asked her if the danger of the track fazed her, and without a hesitation she said, “It doesn’t matter. I just want to get to as many races as possible.” Now that is the mark of a true race junkie! She confided that she was nervous due to her previous injury, but she starts each race with a fresh mind.

When I asked her about making the main event, Molly said she was overjoyed because she knew she had made history in being the first woman to qualify for the race. In the main Pro Singles event, her skills were immediately put to the test as a crash happened in front of her at the beginning of the race. I remember this crash: She was just out of my sight when it happened. It seemed to happen so fast that I was worried she’d gone down but realized she came away unscathed. When I later watched the footage of the race, I was impressed with how quickly and smoothly she avoided the crash that happened so quickly right in front of her. She told me that she had no thought but to get out of the way, but immediately felt the adrenaline rush of the close call. When the race restarted, she reminded herself to stay focused on her goal of crossing the checkered flag safely.

Molly did, indeed, finish the race safely in 15th place. She told me she was happy to have made the main event, but she wish she’d placed higher and achieved greater speed. The race itself is very long, and the day was tiring. She views it all as a great educational experience, and she feels more confident in handling the bike and choosing lines on the track for next year. Her enthusiasm and attitude makes me confident she will be the rider to watch next year at this race.

As our conversation came to an end, I asked Molly what he biggest accomplishment was in her 12 years of racing. I was surprised to hear that she viewed no single experience as the greatest, but instead she is happy with the clear progressive progress she’s been making with each race. She’s been happy that she earns more and more points with each race, and she realizes that she would not be where she is without her team, which includes her parents, grandparents, friends and sponsors.

To close out our conversation, I asked Molly if she had any advice to other aspiring lady riders and racers. I have to say, her response is a real testament to what a great head she has on her shoulders. She said, “Never give up. Always try your hardest, have fun and remember there’s always never time. So just never give up.”

RideApart wishes Molly the best success with Springfield and the rest of the season. I have a feeling she’s going to be talent to watch next year!