5 Forced Induction Sportbikes That Made History 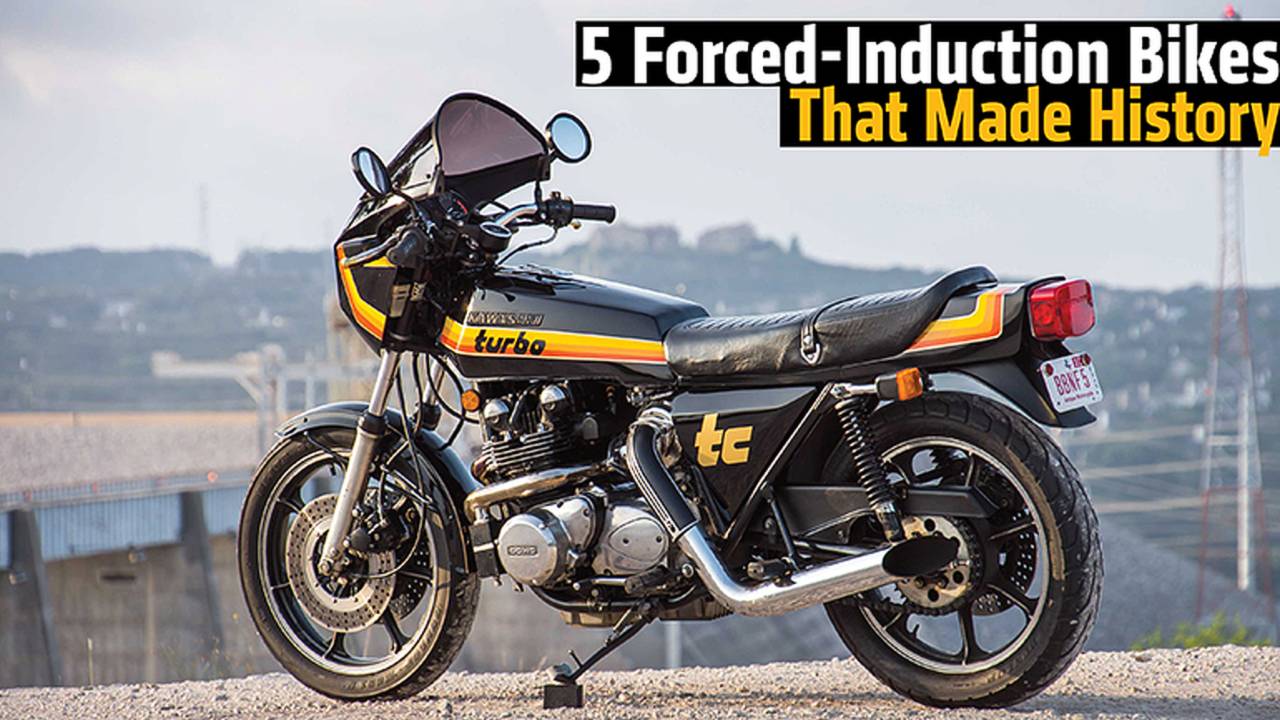 The recent introduction of the supercharged Kawasaki H2R with its enormous power output got us thinking about other manufacturer-made and aftermarket forced induction sportbikes that left a dent on motorcycle history.

Boosting a bike isn't just for the aftermarket, production examples exist and have for a long time; the method of squeezing extra power out of an engine with forced induction (supercharger or turbocharger) has been around longer than you might think. At the start of the thirties (yes - the 1930’s), motorcycle manufacturers such as Moto Guzzi, CNA, AJS, and Binelli and others were starting to tinker with supercharging Grand Prix racing machines in eager attempts to win races and land speed records.

Interesting developments during those years included the DKW SS350, which featured a two-stroke, twin-cylinder, five piston engine. Four of those pistons were used for combustion and exhaust strokes while the fifth was used for forced air induction (supercharging). In those days, the realm of engineering experimentation to produce more power had a lot of free reign, and this produced some interesting power plants.

For those who don't know the definition of forced induction, it's any method of forcing air into an engine in order to increase air pressure density, leading to more oxygen and the ability to burn more fuel. Forcing air into an engine at a faster rate heightens the amount of fuel that can be pushed in, causing increased combustion and total power output. This essentially refers to supercharging, which uses an engine-driven turbine to force air into the engine; turbocharging uses a turbine powered by the engine's exhaust. If we had to pick just five boosted bikes that capture industry-disruptive engineering and our attention as riders, this would be our list:

The Rondine Four, built shortly after CNA assumed assets of GRB and brought over aeronautics engineer Carlo Gianini, was a four-cylinder, supercharged, water-cooled, inlined cylinder engine with gear driven dual overhand cams. It produced 86bhp at 9,000 rpm--and it was built way back in 1934 (just think, your Sportster or Triumph doesn't even make that kind of power).

At that time, it was as much of a shock as the H2R, with its 300bhp, is today. At its first debut in 1935 at Grand Prix of Tripoli, matched against the successful factory Norton and Moto Guzzi teams, the two Rondine bikes took first and second and clearly defined their arrival on the scene.

While the Four was clearly a king of its time, what makes it stand apart from the other supercharged bikes in that day was that for the next 10 to 20 years, the DOHC 4 cylinder construction of engines Gianini and later Giuseppe Gilera produced would continue to be copied and be the bike to beat for world speed records and competition racing.

While not really a factory submission into the forced induction category, the Z1RTC was definitely a shot in the arm to the motorcycle world at the end of the Z1 reign of 1000cc terror. The Z1 had already been dominating the market with other manufacturers scrambling to get ahead of Kawasaki, but at the end of 1977 the 1000cc game had changed with the introduction of the Honda CBX and Suzuki’s GS1000.

When former Kawasaki Marketing Director Alan Masek and then CEO of TC Corp started strapping ATP turbocharging kits to the outgoing Z1R, the result was nothing but insane. With approximately 130bhp at 8,500rpm (before messing with the waste gate screw), once the turbo spooled up, you were in for a ride.

Sold in limited Kawasaki dealerships as a use-at-your-own-risk, without warranty, required a liability waiver (seriously), and a “what could go wrong” mentality, this rocket ship was a bold move for Kawasaki.

With TC Corp fronting the liability issues of this “kit” bike, the Z1RTC was able to keep attention on Kawasaki until the Kawasaki GPZ1100 debuted.  While the Z1RTC had limited production of 500 units, this forced induction bike was the first of the turbocharged madness that was to follow, making it a forerunner and earning it a spot on our top five.

No, this list isn't just all Kawasaki's, but Big Green definitely did make history with a forced-induction bike back in 1984: the 750 Turbo or as most called it, the GPZ Turbo.

If you haven’t picked up on the theme so far, Kawasaki likes being king and making a dominant statement in the motorcycle world, and the GPZ Turbo was no exception. Manufactured between 1983 and 1985 with claimed 112bhp, more useful fuel injection than its competitors, around 148mph top speed and a quarter mile time of 11.2 seconds, the GPZ Turbo was faster than the other turbo bikes of its day, such as the Honda CX650 and Yamaha Seca Turbo.

It was a much more refined production bike compared to the rowdy Z1RTC with approachable power and handling, while still keeping Kawasaki ahead of the other turbo bikes.  Those characteristics along with sleeker lines and less futuristic styling like the Yamaha Seca made it an instant classic forced induction bike.

Since we're mixing between production and non-production kits, the Bimota is an Italian manufacturer who builds high performance bikes utilizing its own chassis designs around other manufacturer engine platforms; enter the supercharged Bimota DB11 VLX.

Visually stunning and usually very fast, Bimota bikes are a rare site, and rarer still is their supercharged DB11 VLX which debuted in 2012 in Milan. Based on an 1198cc Ducati Testastretta-powered engine, the DB11VLX had a Sprintex dual-screw supercharger making around 188bhp with 105 foot-pounds of torque.

Weighing in under 400lbs, with Bimota’s high-performance chassis, this bike was a screamer and probably had more power than one person knew what to do with. The DB11VLX is not really a game changer when it comes to the motorcycle industry seeing as how it’s a development of a niche producer and intended as a kit for their bikes, but it is still a beautiful machine and worthy of our list.

Our number five bike and our Honorable Mention bike are where we're going to cheat and list our guilty-pleasure bikes. Both of these machines aren’t forced induction production bikes, but they still hold a special place in motorcycling. We'll start with the A&A performance supercharged Honda VFR 800.

VFR’s are such a great bike and while I’ve never owned one, I’ve recommended them to anyone who has asked me for a recommendation for a sporty yet comfortable bike to buy used. The V-4 engine on the VFR is a reliable yet rumbly power plant producing an awesome sound and usable power. Strap an A&A supercharger kit on that engine and you’ve got yourself a flat out scary fast machine.

I’ve seen horsepower figures anywhere from 155bhp to 200bhp and while the supercharger and engine seem to hold that power ok, the clutch appeared to be the weak link above 155bhp. Unfortunately A&A is no longer in business but their kit was incredibly well put together and made an awesome bike, more, awesome-er.

Here is where the guilty pleasure really shows. For the last submission into our top five, uh… five and a half, is the bike(s) belonging to the famous (or infamous) Swedish “Ghost Rider” who attacked European streets through impromptu time trials that often led to police chases - these high-speed escapades were then released to the internet for viral consumption.

Ghost Rider (allegedly Patrik Fürstenoff) may be shrouded in secrecy, but his turbocharged Suzuki Hayabusa and GSX-R1000 has been dissected may times over. To be clear, we don't condone his road tact but respect his many high-power builds. It's no secret the Hayabusa is extremely receptive to power adders. Ghost Rider's stripped-down build claimed 499bhp.This bike, with Patrik at the helm, in 2007 set the Guinness World Record for fastest wheelie at 214mph which still stands today.

If you look closely, you can start to see a pattern between forced induction and motorcycle production. It seems around every 40 years or so, a manufacturer pulls the forced induction card out of the deck and lays it on the table. With Kawasaki’s previous experience boosting production sportbikes, is it any wonder that the H2R came from its stable?  Thankfully, today we have the onslaught of bike nannies and traction control aids to put all of this power into a usable "consumer" package. Combustion engines need to keep up with the EV revolution some way....

What’s your favorite forced induction bike of all time?