The Trouble with Teammates, Part 1 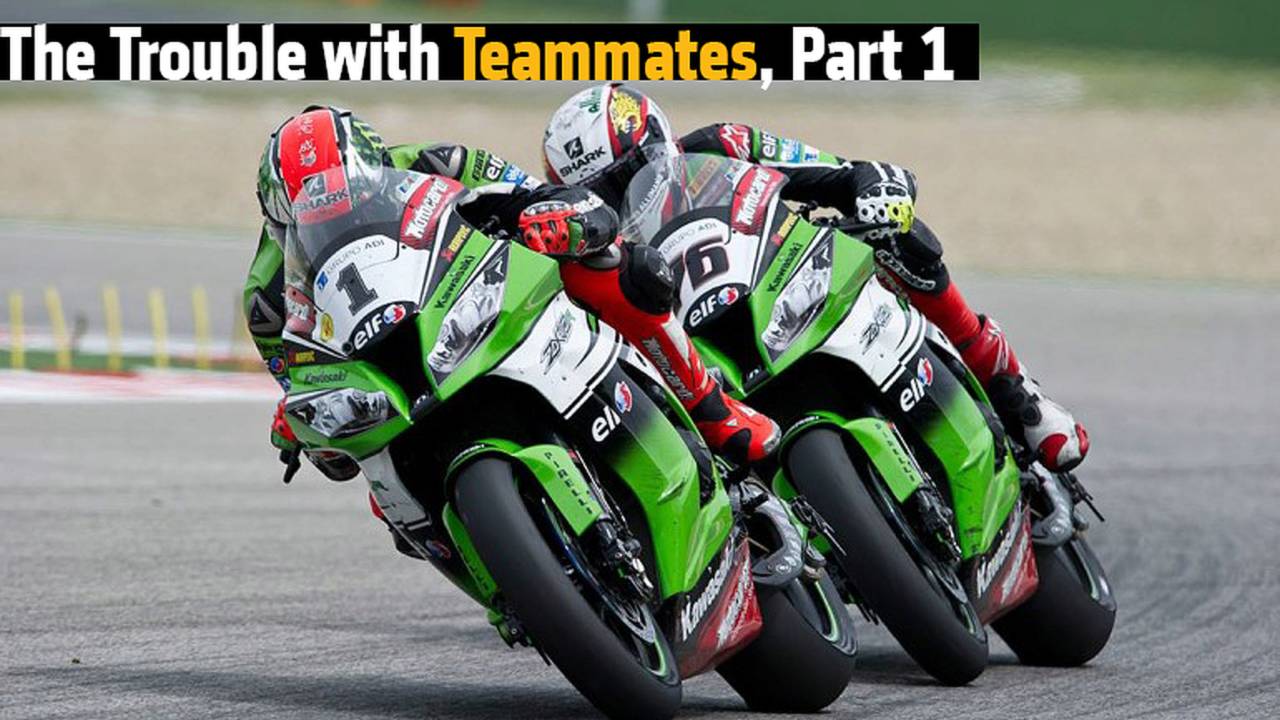 Part 1 of our exploration of the strange system of teammates in motorcycle racing, its risks and benefits, and what might be done about them.

Two prizefighters enter the ring. They're announced, the referee reviews the rules, and the bell sounds, starting the fight. Round after round they trade blows, each trying to play to their strengths, sticking to their strategy. As the fight enters the last few rounds, two other fighters enter the ring, each dressed similarly to one of the original fighters. These interlopers fight with each other, but occasionally throw a jab at their teammate's opponent, or try to trip them up. When the final bell sounds, the winner is declared between the first two fighters, while the teammates are escorted from the ring.

Sound contrived? A little crazy? Maybe bit like an old WCW match? It would be, but this isn't far off from the situation we witness season after season in racing, both on four and two wheels. Racing teams are the norm today in most asphalt disciplines, with on-track interaction ranging from minimal (World Supersport) to pervasive (Formula 1). While no one objects to the concept of racing teams in theory, when the system starts to interfere with the racing, as in the case of team orders, fans and media alike rightly turn up their noses. Team orders are viewed as external interference in what is meant to be a purely individual contest, and thus seems to meddle with the very spirit of the sport.

There are a whole host of side effects, intended and otherwise, to the system of teams in racing. In this two-part series, we'll explore some of the more prominent examples of teams in motorcycle racing from recent years, the effects on each of the riders, and whether anything should be done to help preserve the nature of the sport from the influence of actors outside the track.

Tom Sykes (1) holding off Marco Melandri (33) and Sylvain Guintoli (50) at Laguna Seca. Sykes would lose the title to Guintoli in dramatic fashion in the last two rounds of the 2014 season. (Photo courtesy Kawasaki Racing.)

The 2014 season in World Superbike and Grand Prix provided vivid illustration for the profits and pitfalls of racing with a teammate. Team orders reared their ugly heads in World Superbike on multiple occasions, although they were not closely followed. Marco Melandri ceded to his teammate (and eventual World Champion) Sylvain Guintoli in Race 1 at Magny-Cours, but decided that was quite enough when the same request was made in Race 2, and took the win for himself. Things were less egalitarian in the Kawasaki Racing Team garage, where reigning 2013 champion Tom Sykes was left fuming after his teammate Loris Baz refused to yield at the final round in Qatar. Although Baz's alleged recalcitrance would technically make no difference to the outcome of the championship (Guintoli would win by 6 points, Baz giving up a position would only have granted Sykes 4), the pair would engage in a brief but pointed Twitter feud after the final race.

Of course, the efficacy of team orders is largely dependent on what control the team has over the rider's future. In the case of Baz, who already had a contract to go to MotoGP the following year, Kawasaki's demands carried little weight, especially as Baz and Sykes had never really gotten along. Melandri had cause to be more careful with Aprilia, as he was piecing together a MotoGP contract with the same manufacturer. But his resumé and performance, along with the convenient fact that his teammate still won the championship, allowed his disregard for team orders to be overlooked.

Jack Miller (8) finds his KTM swarmed by the Hondas of the Estrella Galicia and Saxoprint RTG squads. It was a common sight for Miller in 2014, and notable by the absence of a teammate to help him. (Photo courtesy Red Bull KTM Ajo.)

In Grand Prix racing, teammates became a factor in the closing rounds of the Moto3 world championship, and nearly a deciding one. Australian Jack Miller had led the points standings for much of the year, but found himself trailing the relentlessly consistent Alex Marquez. Marquez was aided throughout the season by the strong performances of his Estrella Galicia teammate Alex Rins, who didn't often manage to take points away from Miller directly, but was still able to be in the fight at the front. By contrast, Miller's teammate, rookie Karel Hanika, never featured in the pointy end of the races. Miller did get some assistance from Englishman Danny Kent, of the Red Bull Husqvarana Ajo team, the sister squad to Miller's KTM Ajo team. Kent fought with Marquez mightily in the final two rounds, besting the Spaniard at Sepang to help Miller close the points gap, and falling just short of a repeat performance in the season finale at Valencia. Kent's defense of his teammate was so enthusiastic, in fact, that his riding (along with Miller's aggression) was the subject of a formal protest (however unsuccessful) to race direction by the Estrella Galicia team.

These recent examples illustrate the variety of outcomes from the odd system of teammates in racing. When the rider on the other side of the garage is very good, he can end up taking points away from you (Baz), helping you (Rins, Kent), or largely doing his own thing (Melandri). If there is a wide spread in ability or experience (Miller and Hanika), having a teammate may make little difference at all, except that the lack of help may become conspicuous in comparison to the competition. And that's only from the perspective of the lead rider, who may have attained that position by ability, but sometimes becomes so by virtue of nationality, sponsor support, history with the team, or a variety of other circumstances having nothing to do with on-track performance or potential.

Check back for part two of this story, where we discuss the perils of being the second rider, team orders, and the advantages of two-rider teams.

READ MORE: What To Look For In a Bike Shop