The Men Who Founded Harley-Davidson: History of the Bar and Shield 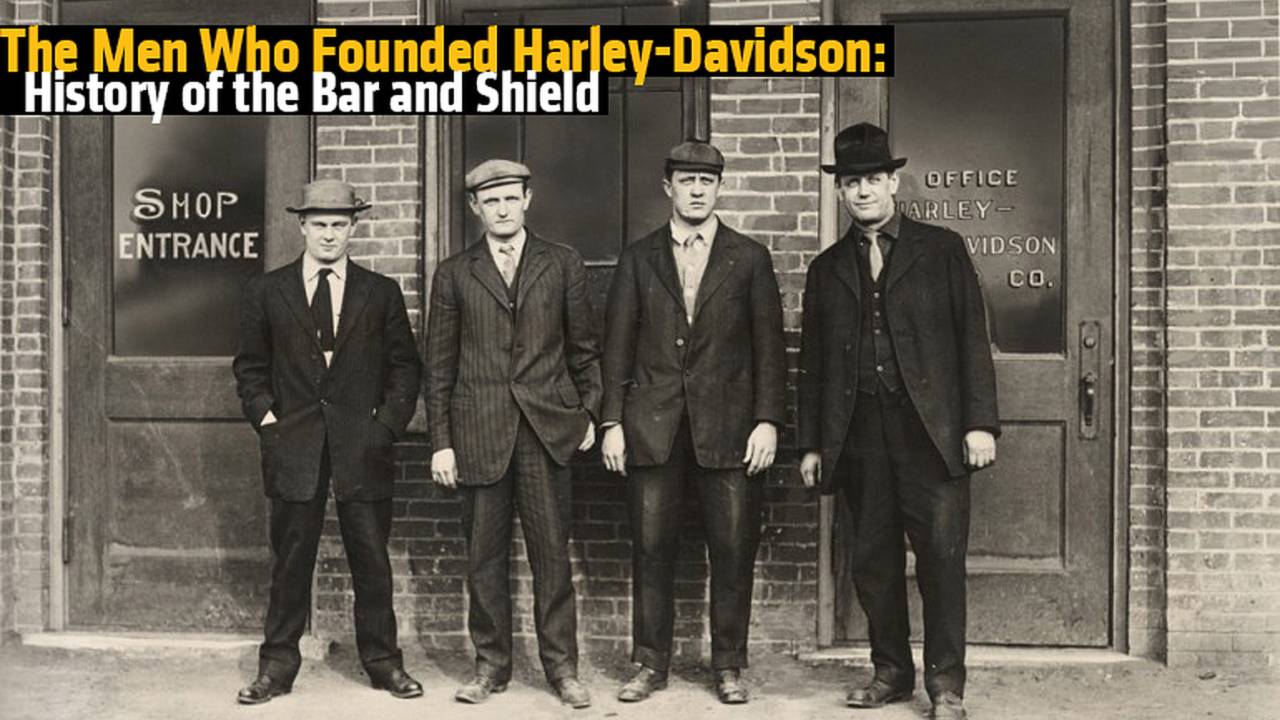 Who were the founding fathers that created the 112 year-old legacy of Harley-Davidson? Read our history lesson on the iconic moto-manufacturer.

Whether you're a die hard Harley rider or you wouldn't be caught pushing one around a deserted parking lot, there is no denying that few motorcycle companies have achieved the success that Harley-Davidson has over their 112 year history. But who were the visionaries behind this iconic brand?

Most would guess that it was probably some guy named Harley and his partner Davidson, which would be pretty close to the truth. A more complete version is that Harley-Davidson was founded by William Harley and the three Davidson brothers: Arthur, William and Walter.

READ MORE:  Why This Harley Will Be My Last

The Motor Company can trace its beginnings all the way back to the late 1800's to a house on Ninth Street in Milwaukee, Wisconsin. To be fair, it would actually be two houses on Ninth Street, the first belonging to the Harley family and the second belonging to the Davidson family. William Harley and Arthur Davidson were only one year apart in age and growing up just a handful of houses away from each other made for the beginnings of a life long friendship.

Like most boys of that era, they were both entranced by that hot new form of two wheeled transportation called the bicycle. William was so intrigued by bicycles that he took a job at a Milwaukee-based bicycle factory at the age of 15.

Little did he know that this had set him on the path of building the first Harley-Davidson motorcycle.

By the turn of the century, William had worked his way up from cycle fitter to draftsman and soon left the bicycle company to work as a draftsman for the Barth Manufacturing Company. It was during this time that he designed his first internal combustion engine based on the French de Dion-Bouton engine, which was widely used (and widely copied) by early motorcycle manufacturers. With the help of Arthur, a fellow draftsman at Barth and a mutual friend whose father owned a lathe, William spent the next couple years trying to complete a prototype machine in his spare time.

That first machine never materialized, but William was already putting his skills as a draftsman to use designing a second prototype by 1903. William and Arthur realized that what they really needed in order to build a complete motorcycle was a competent machinist, so they hatched a plan to enlist the help of Arthur's older brother Walter. Walter was an experienced machinist who had worked for the Milwaukee Railroad, but was living Parsons, Kansas at the time. CONTINUE READING...

According to the Harley-Davidson archives, the two sent Walter a letter claiming that they had built a motorcycle and were saving the first ride for him. Walter took the bait and when he arrived, he found that there was not even a partially assembled motorcycle—just a pile of parts. Still, something about the idea of a two wheeled self propelled machine appealed to Walter and he decided to stay in Milwaukee to help William and Arthur build their first motorcycle.

READ MORE:  A History of Harley-Davidson and the Boys in Blue

That same year, William enrolled in the School of Engineering at the University of Wisconsin at Madison. Also around that time, the oldest Davidson brother named William had caught wind of what his brothers and William Harley were up to and he came to join the group too. William was an mechanic and tool room foreman for the West Milwaukee shops (another railroad company), and his skill set was a definite asset in building their first motorcycle.

With the "dream team" now together, construction of the first Harley-Davidson motorcycle began in earnest in a small wooden shed located in the backyard of the Davidson family home.

Most of the motorcycles on the roads during the early 1900's were essentially just motorized bicycles. Even their soon to be rival, the Indian Motorcycle Company, used a bicycle style frame with a small, under-powered motor mounted in it. William took note of this and also looked at the loop frame design used by fellow Milwaukee motorcycle manufacturer Merkel. Basing his own designs heavily on the Merkel frame, the first Harley-Davidson prototype was built using a loop frame and 440cc single cylinder motor.

With William away at engineering school and everyone else working full time, things moved slowly at first.  A second prototype was completed around 1904, and it still survives today. It's known as Harley-Davidson Serial #1, and can be seen at the HD Museum in Milwaukee. It also was the first Harley-Davidson motorcycle to be documented as participating in a motorcycle race, which they unfortunately lost to another rider on a Mitchell motorcycle.

Harley-Davidson Serial #1. Photo courtesy of the HD Archives.When Harley-Davidson incorporated in 1907, middle brother Walter was selected to be the first president of the company.  Arthur took on the positions of general sales manager and secretary while older brother William became the works manager.  By then, William Harley had completed engineering school and took on the obvious role of chief engineer as well as treasurer.  With these four at the helm, Harley-Davidson tripled their production for 1907, producing 150 machines.

When Harley-Davidson incorporated in 1907, middle brother Walter was selected to be the first president of the company. Arthur took on the positions of general sales manager and secretary while older brother William became the works manager. By then, William Harley had completed engineering school and took on the obvious role of chief engineer as well as treasurer. With these four at the helm, Harley-Davidson tripled their production for 1907 by producing 150 machines.

At this point, you're probably wondering why the company was named Harley-Davidson when there were three Davidson brothers and only one Harley. It turns out that the original idea for building a motorized bicycle came from William Harley, so everyone agreed that his name should be first. That was a good choice, as Davidson-Harley just doesn't have the same ring to it...

Perhaps one secret to the success of the Harley-Davidson Motor Company was that all four founders were true motorcycle enthusiasts. Whether it was participating in racing and endurance runs, or just taking a motorcycle down to the lake for a day of fishing, Harley and the Davidson brothers lived and breathed motorcycles.  All four of the founders continued to work for Harley-Davidson up until their deaths, with Arthur Davidson out living all of them until he passed away in 1950.