Overland Expo: A United World of RamblersSome of us get on a motorcycle and ride as fast as we can. Others prefer to test the limits of...

Some of us get on a motorcycle and ride as fast as we can. Others prefer to test the limits of gravity. Others still prefer to test their own endurance above all else. Some of these people we call wanderers and this is their rally.

Less of a motorcycle party or event –– it’s not even specifically tailored to motorcyclists, although there is a dedicated section for us two-wheeled adventurers –– the Overland Expo is more about the “going” than the bike itself. And more about the things you need to get there. Known to regular attendees simply as OX, it's an outfitter’s gathering and a gathering for travelers using four wheels or two. 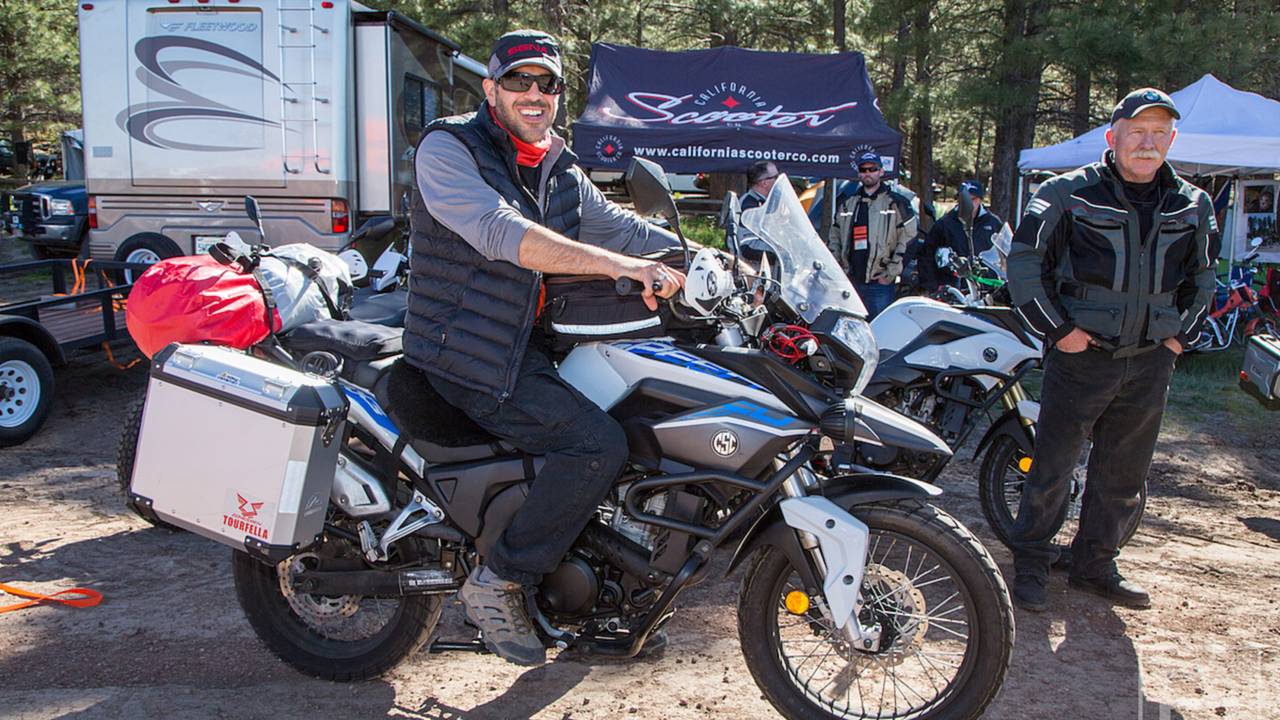 Those of us clearly planted on the two wheels side ride to the event, and this year was no different for me. Sleeping under the stars is just one part of the glory of traveling to the Western weekend of the expo, which this year was held in Flagstaff, Arizona.

Last year however, the rally garnered the name “Snowverland” after a strong bout of late-breaking winter came through mid-rally. That was the night I realized I needed a tent from this century and one that's waterproof. Luckily the sun shone down on Mormon Lake and it was year like no other weekend before: not too hot, nor very windy. We’ve seen it get worse in both those senses, and welcomed the calm easygoing weekend. 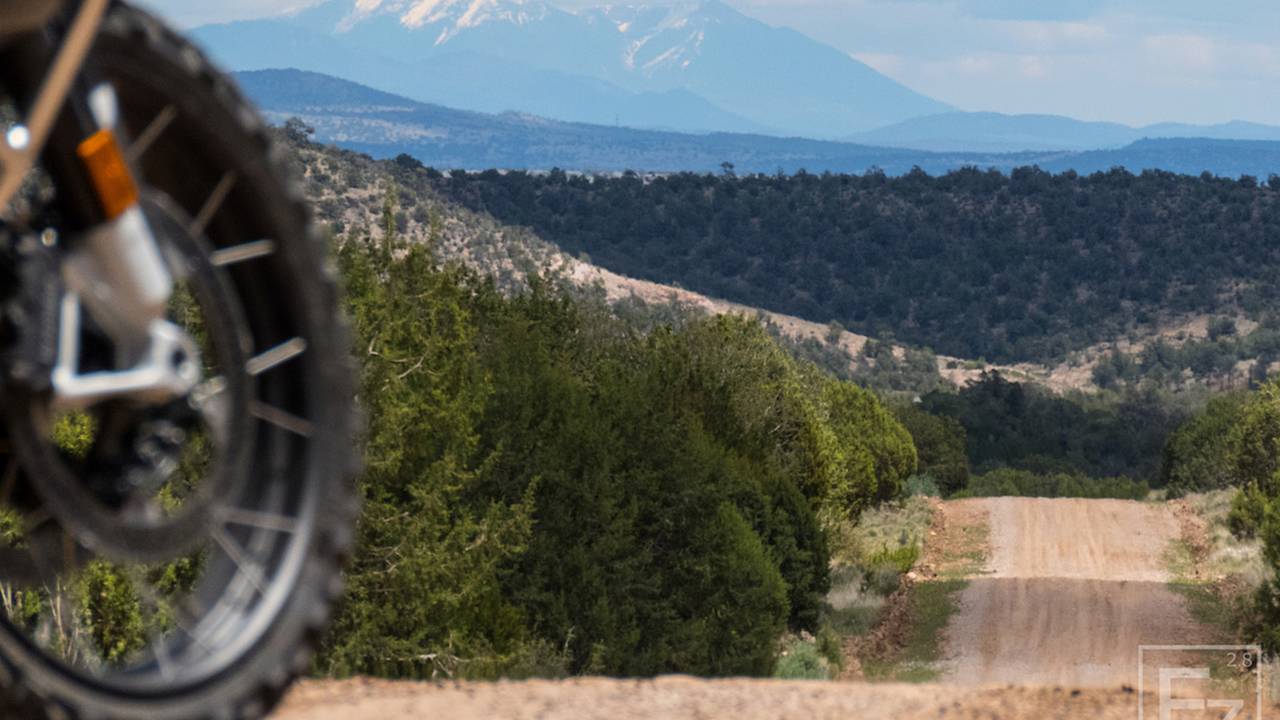 The conditions left many more smiles on the vendors' faces, too.

Traditionally, trucks of any and every size can be seen at OX. Conversion vans to Pinzauers, brand-new Land Rovers to off-road-worthy Westfalias, every one of them with an out-of-state plate and a sticker from some other part of the world on it. 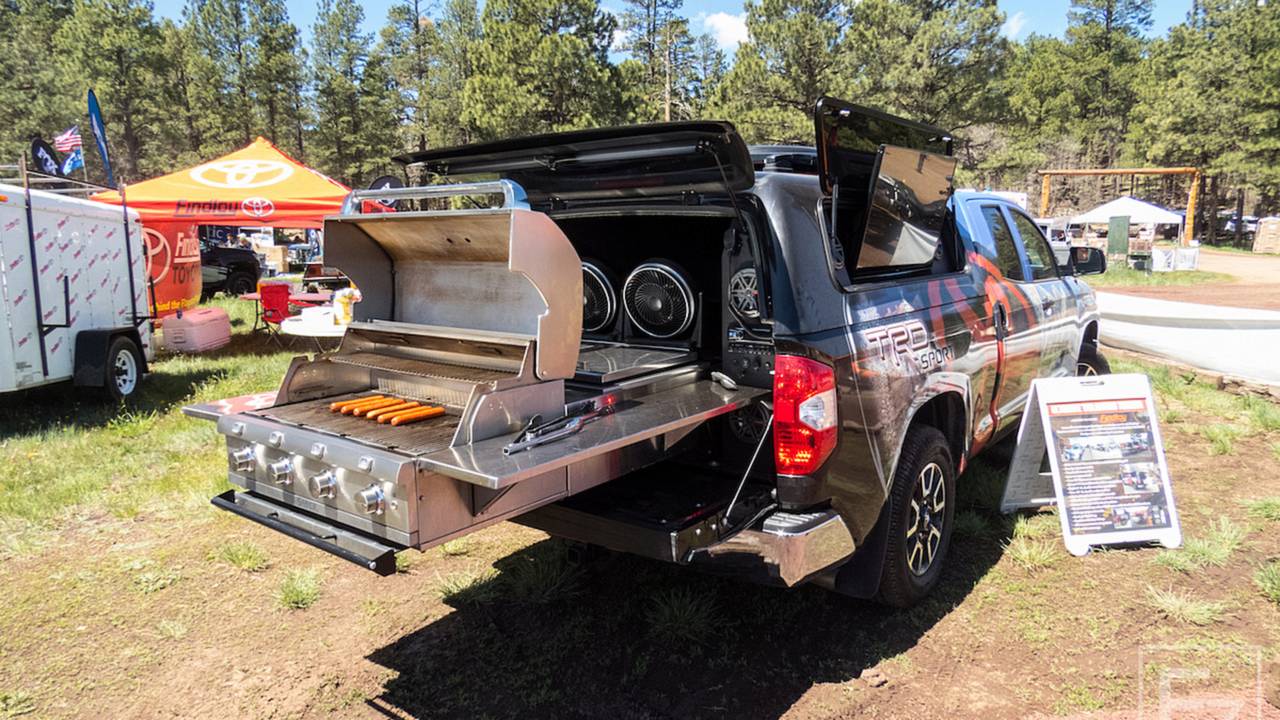 In the two-wheel camp, manufacturers showcased their wares, hard and soft, to a stronger showing of riders this year. The weekend’s total attendees reached nearly 10,000 with both the day-passes and full-weekend heads counted.

A newcomer to the event —but not new to riding apparel— Alpinestars was there showcasing the Durban Suit, as well as the Corozal and Toucan adventure boots. Also on display was this year's Dakar winner’s (Toby Price) ride suit –– sadly not for sale in any form. 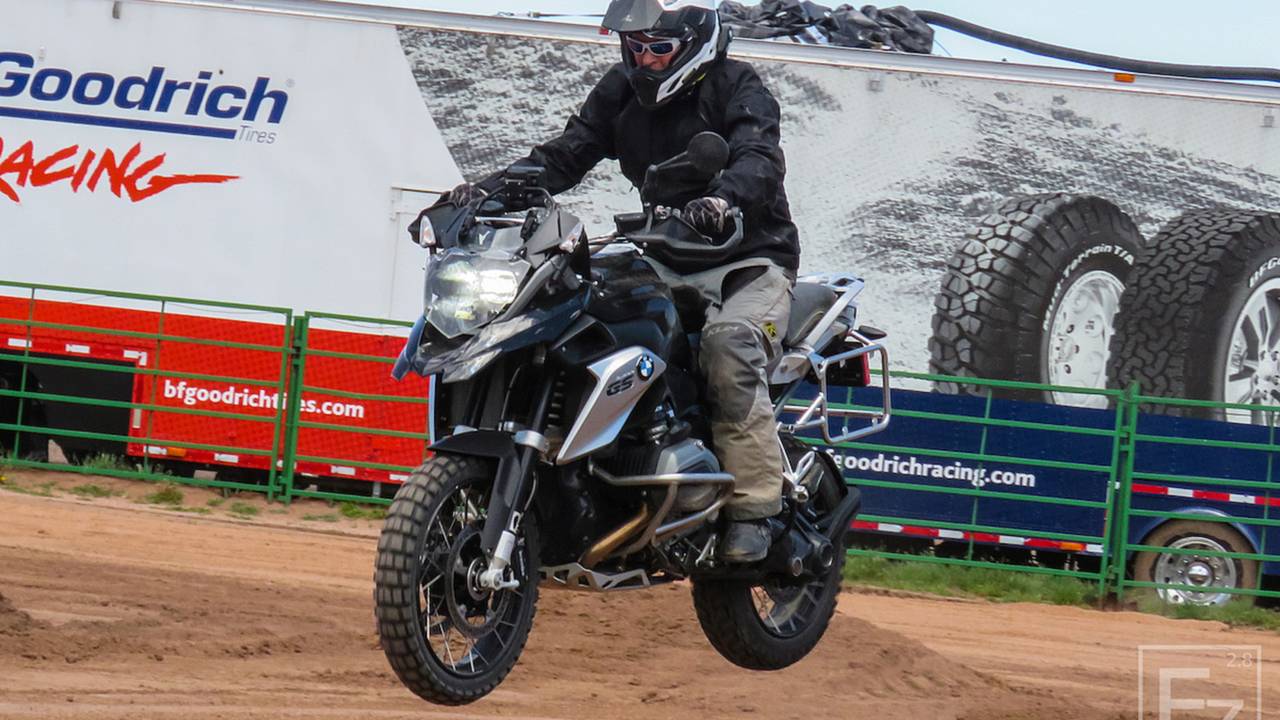 Another first for OX, was having the KTM demo truck on site. That makes them the first OEM to speak directly to the overlanding crowd, one supersaturated by BMW GS models and myriad small-displacement bikes of the sort that tend to get sold more often around the world. KTM’s line-up speaks more to the latter, with a heavy lean toward the off-road user over the pavement pounders.

But we’re OK with that. And when KTM puts together an affordable small-displacement “adventure” bike, they’ll sell even more of them. 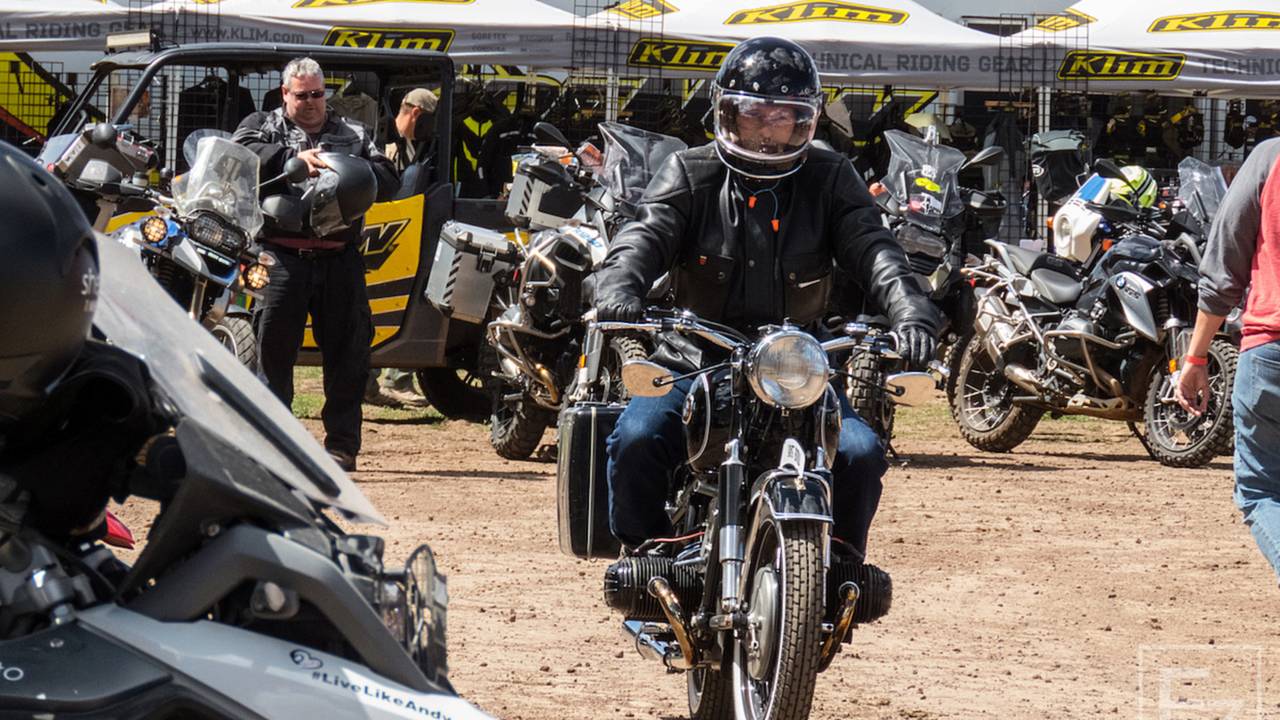 Hard parts and soft bags are a major component of vendor row at the Overland Expo, but that doesn’t mean there wasn't anything else to see. "Small Bikes, Big Change" showed us how the other half lives, crossing borders and countries on 100-mpg two wheelers. SENA was there keeping everyone wired up and riding connected. RawHyde Adventures was there with local, group ride-outs and on-site ride instruction from its BMW-certified training center staff.

Want to learn to loft a wheel on that big bike? Or make it fly without having to spend a whole weekend at either of their ranches in SoCal or Colorado? Come see Jim and the team at Overland Expo West next year, or at the East event in October. 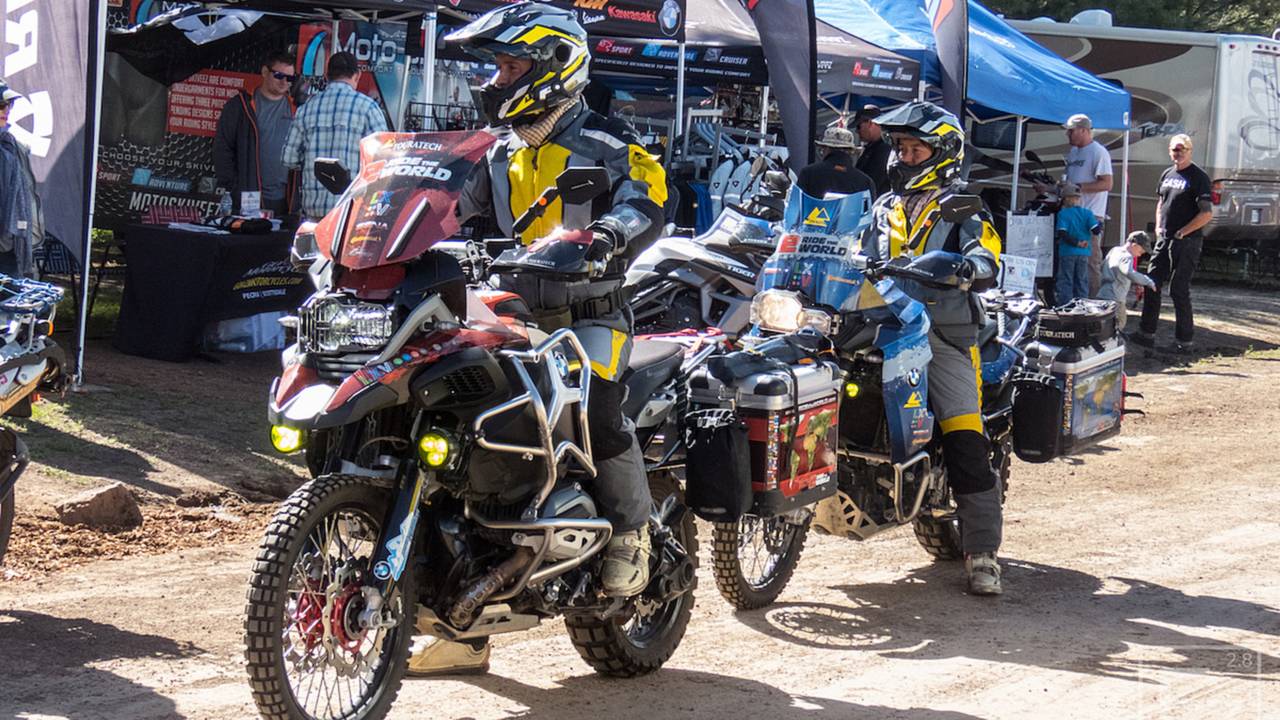 And when the ride gets too tough, or too clammy, stop to see Shawn at MotoSkiveez for some moto-specific undergarments. Their padded shorts, moisture-wicking tops and compression socks should get you back on track and feeling fine over the long haul.

All that said, and aside from an all-day brainstorming session with the Expedition 65 team, OX is home to wanderers from every corner of the globe. With many of them making the Expo part of their journey each year, to see both the show, and the people. 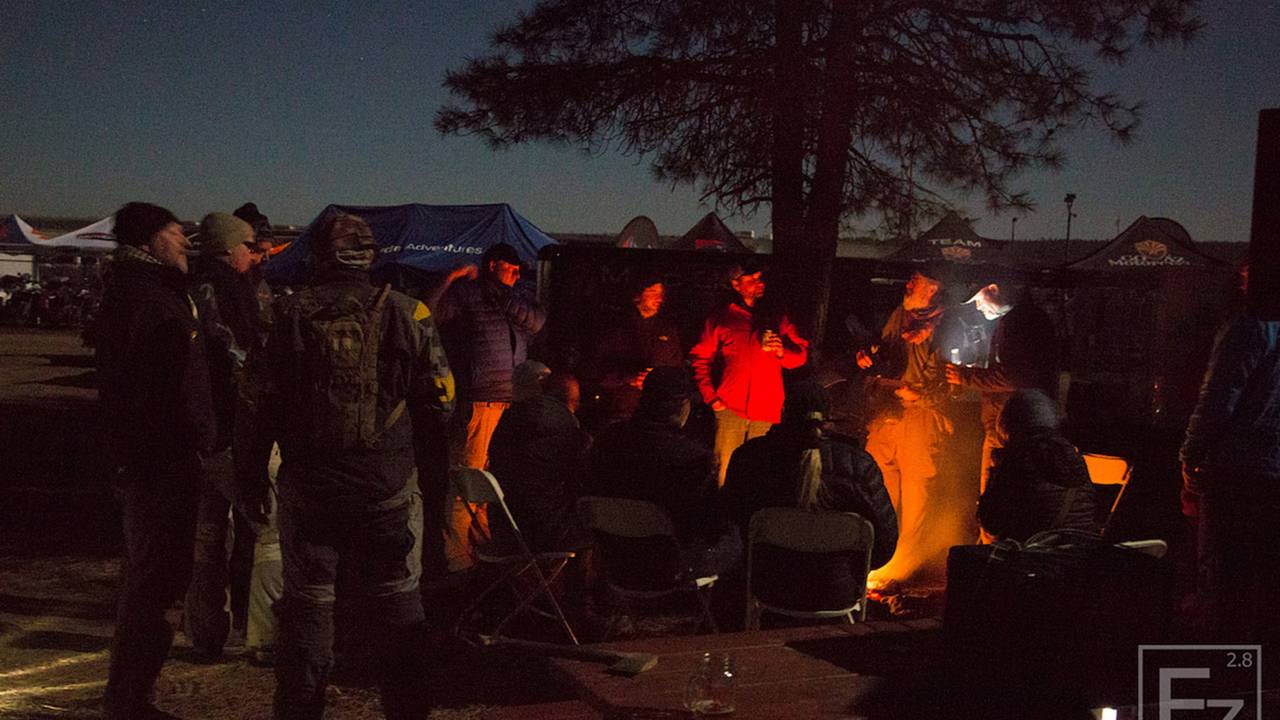 With Land Rover, Jeep or Dodge making strong displays on the truck side of the event it can be easy to overlook the smaller aftermarket parts manufacturers, but make time for it. As a curious traveler, I’ll walk the other aisles as well. Just because the "truck people” actually DO carry a kitchen sink with them when they travel, doesn’t mean they don’t make something we can use on the bikes, too.

This year I learned a little bike about the Nordic trend of Tentipis: spacious, small-packing, but expensive (quality and ingenuity require it sometimes) tents. I also learned how far prices have fallen for solar panels. OverlandSolar.com had show specials running this year that put a portable 28-watt system in your hands for what you might have spent last year for a 13-watt system.

And poor Nick Calderone, of the syndicated video chat show “Right This Minute,” arrived this year as the butt of an office prank. Man enough to face the world beyond his office park, he rode his hot pink and furry “custom” V-Strom up from Phoenix. Brave man.

Admission price for the Overland Expo varies depending on your commitment to the landscape but typically includes hundreds of vendors, dozens of classroom instruction and demonstrations per day, a happy-hour drink after the booths close each night, plus on Sunday there’s a mass BBQ that’s not to be missed. At night there are moments for everyone to relax together, to talk shop or chop talk, and there’s usually a keg or three hiding in someone’s camp.

By: Alfonse Palaima
++
++
Got a tip for us? Email: tips@rideapart.com