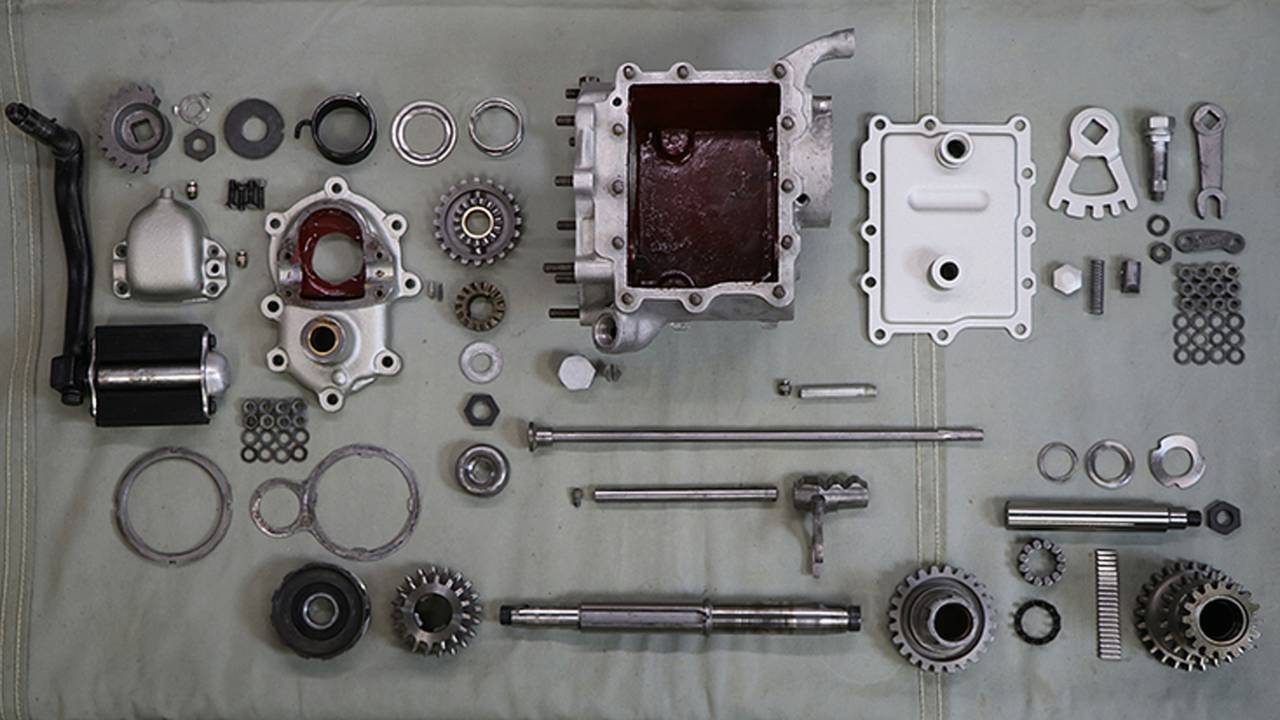 Unlocking the mystery of what's inside your motorcycle's transmission case.

As motorcycle riders, I feel that most of us have a decent understanding of how an internal combustion engine works (Those of us of a certain age at least - JM). We may not all be able to rebuild one ourselves, but we do have the basics of 4 cycle operation under our belts. When it comes to transmissions, it seems that what is happening inside is a lot more of a mystery to the average rider. I'm currently rebuilding the three speed transmission in my 1933 Harley-Davidson VL, and I'm going to take you through the ins and outs of this unit to give you a better idea of what is going on in your own transmission. Modern transmissions are certainly more sophisticated than this vintage piece of machinery, but the overall design concepts are still roughly the same.

Your standard transmission case, coated on the inside with Glyptal.

A VL transmission uses three different sets of gears to transfer power from the engine to the rear wheel. The first of these is the main drive gear which is mounted half inside and half outside of the transmission. As you can see in the photo below, this gear has a threaded portion which is where the rear sprocket is mounted for the chain drive. It rides on a bronze bushing which is press fit inside the gear and the bushing has small grooves added to its surface to allow transmission fluid to lubricate it as it spins on the mainshaft. Also note the protrusions on the face of the gear, their importance will be discussed shortly.

The main drive gear transfers power out of the transmission and to the rear wheel.

Next on our tour of gears is the cluster gear. This three gear unit is what makes the transmission a three speed – the smallest gear is first, the middle second and the largest third. This gear rides on needle bearings on one end and standard caged bearings on the other.

The main cluster gear contains the three gears that make this a three speed transmission.

The last gear to discuss is the slider gear, which keyed to the mainshaft but slides back and forth. Using its own two gears, it engages with the second and third gear on the gear cluster. Just like the main drive gear, it also has protrusions on its face. These mate with the similar protrusions on the main drive gear and are used when the transmission is in first gear.

The slider gear turns with the mainshaft and can slide back and forth to mate with different gears.

The next major group of components are the shafts. This transmission uses three – the mainshaft, the countershaft, and the slider shaft. The mainshaft not only holds the main drive gear and the slider gear, but also completely exits outside the transmission case to hold the clutch assembly. On the other end of the mainshaft are the components that make up the kicker assembly. The countershaft's only job is to hold the cluster gear and, unlike the mainshaft, it does not spin. The slider shaft provides a mounting point for the slider fork, the part that actually shifts the gears when you move the shift level forward or back.

From top to bottom, a well used mainshaft, a countershaft and a slider shaft.

Next I'll drop in the countershaft and cluster gear so you can really start to see how things work.

The slider fork assembly, disassembled and installed in the transmission.

On the bottom of the transmission lid is a piece called the gear shifting fork, which basically looks like an open end wrench. This piece clips to the peg on the shifter fork and moves the slider gear into different positions, thus shifting the transmission through its gears.

READ MORE: Show Me Your War Face - A Day at the War Run

That is about it for this 1933 Harley-Davidson VL transmission. As you can see, while it is a very simple design it has everything you need to transfer power from the engine to the rear wheel. One thing you might have noticed about this particular transmission is that there is nothing timing the gears together. The lack of synchros is why this style of transmission is called a "crash box". There is a lot of gear grinding in these early style transmissions that has been eliminated with more modern designs.

Of course there is still more to learn, like how the kickstart mechanism works and how the clutch operates, but this is a good first step in understanding what goes on inside of a motorcycle transmission.