A returning reader asks our advice on sport tourers. Would you believe that one of the bikes we suggest is a Suzuki Hayabusa?

Returning rider hopes for cruise control, ABS, and a stereo

I'm a returning rider (been off for 10 years) looking for some insight on sport touring bikes. I saw your review of the Concours14 and thought it was helpful. Looks like I can get a recent pre-owned one for cheaper since the styling hasn't changed much over the years but I was wondering about other bikes that are in that segment that I should consider. I’m hoping to get one with cruise control, ABS, radio/Bluetooth, etc. Any info you could shoot me would be helpful.”

First and foremost, Ed, you’re right to be considering the used market when looking for a sport tourer. The popularity of the genre has been on the wane for almost a decade now, so you’ll find that most new bikes are effectively the same as those being sold a few years ago – manufacturers aren’t putting their research and development dinero into furthering the segment, instead choosing to keep putting out the same ol’ same ol’.

Largely that is because the sport touring segment has been usurped by the adventure touring segment. And, indeed, many of those bikes – eg, Ducati Multistrada – provide all the thrill of a sport tourer while offering more upright, off-road-style. Some bikes, like the KTM 1290 Super Duke GT, blur the lines so much that it’s tricky to know in which box to put them. But for the sake of this discussion, let’s stick with the idea that a sport tourer has sportbike-esque full fairing. By that definition, I’d say your choices look like this:

You live in the United States, so I’ve left off a few bikes that aren’t available to you – eg Triumph Sprint GT, Suzuki GSX1250F – as well as smaller sport tourers like the BMW F 800 GT. If we add in your desire for “cruise control, ABS, radio/Bluetooth, etc,” the herd thins pretty quickly (I’m assuming, by the way, that by “etc” you mean “rider aids like traction control and riding modes”). In fact, you are left with just three bikes: the two Beemers and the Triumph. 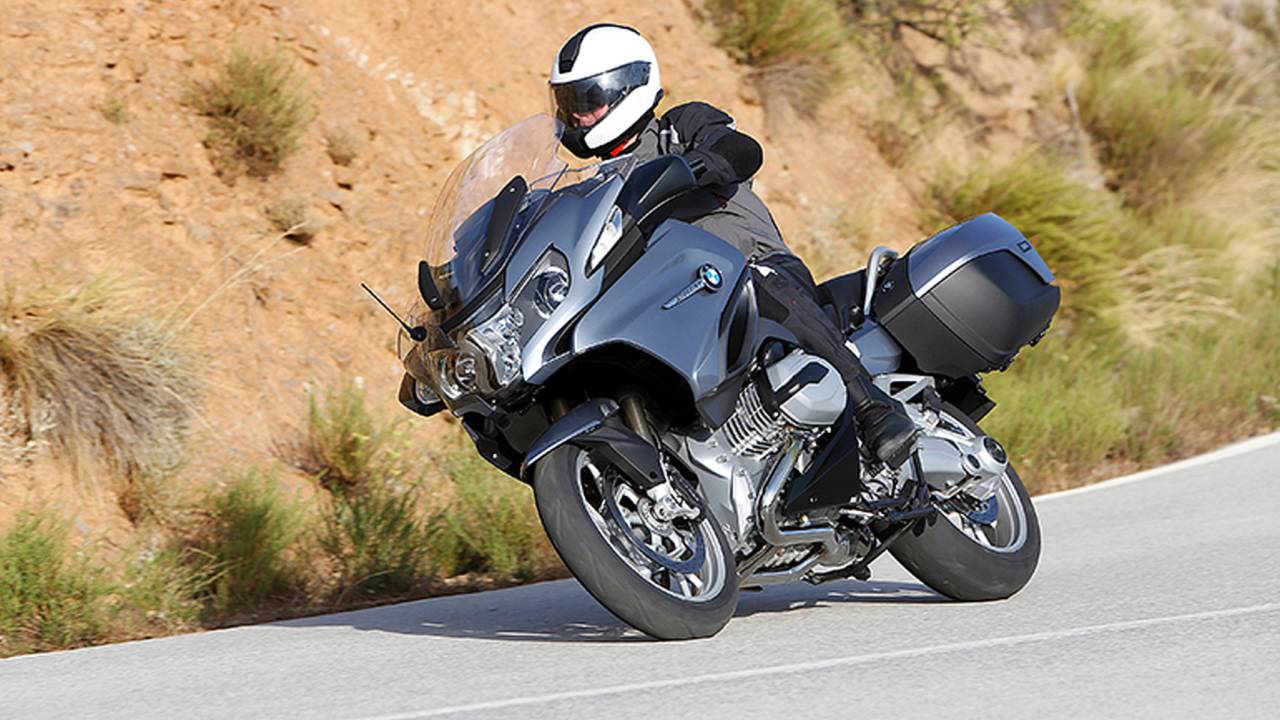 In that scenario, I’d personally put my money toward the BMW R 1200 RT. With roughly 125 hp being delivered by its 1170cc boxer engine, it rivals only the woefully outdated Honda for least power output among the bikes listed, but its 93 lb-ft of torque delivers plenty of delightful wallop to get you hustling well above the speed limit in no time. There’s a reason the bike is relied upon by a number of police forces worldwide. It has an extensive electronics package; I can personally attest to the fact its stereo can be heard by following riders; and it is crazy comfortable for rider and passenger to eat up countless miles.

The RT was the subject of a massive recall in 2015, but the general consensus is that BMW dealt with the issue well and the bikes have been relatively reliable ever since. Whereas the issues with the K 1600 GT are notorious; transmission, suspension, and water pumps are among the numerous things to have gone wrong for owners. The Triumph Trophy SE, meanwhile, has been the subject of far fewer gripes but there are rumblings about the reliability of its shaft drive, and the sparsity of Triumph dealerships in the United States may make you unwilling to gamble. 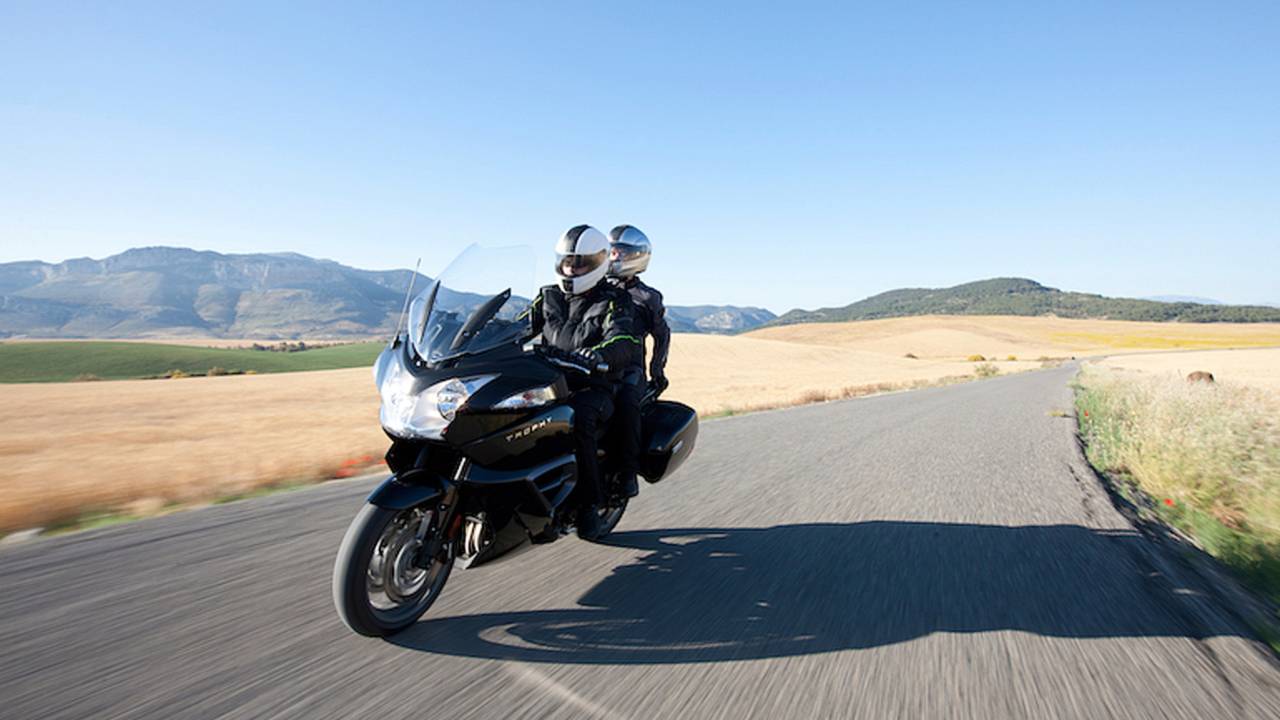 Your sport touring options broaden to include the stalwart Yamaha FJR1300 if you’re willing to forego your desire for a stereo (You can always just get a Bluetooth-equipped helmet if you want to listen to music). Lightly updated last year to include better electronics and a six-speed transmission, the Yamaha has a reputation for being utterly reliable. Possibly a little too much so; the only real criticism of the FJR1300 that I’ve ever heard is that it can lack soul.

One of my favorite things about the FJR1300 is the fact the controls for its (very accurate) cruise control are on the left grip, which I think makes more sense. I’ve long toyed with the idea of getting an FJR1300 to serve as my own all-the-time bike, but here’s the thing: it’s pretty expensive. The Triumph Tiger Explorer XRX that I own has more power, more technological doodads, is capable of carrying more luggage, and costs several thousand less. And buying used in this case will be tricky because the updated FJR1300 – the one you’ll want – has only been out for a year or so. 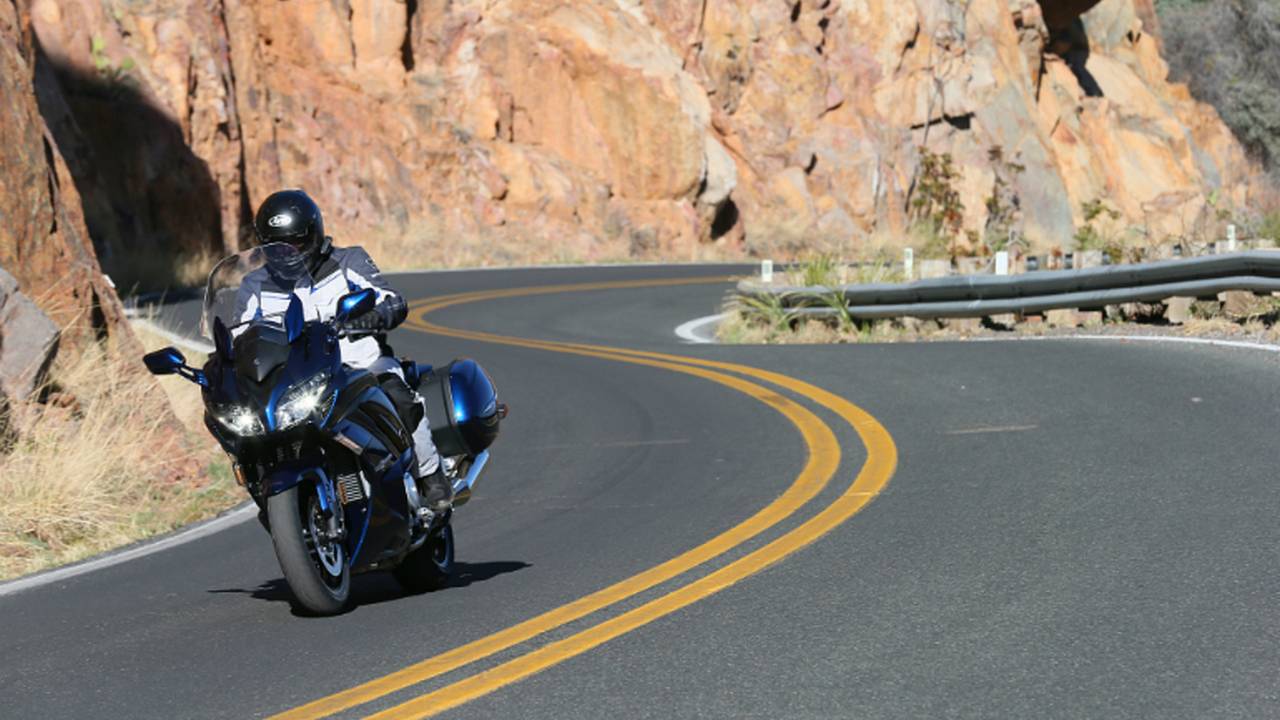 If you can live without cruise control, the Kawasaki is the best of the rest, in my opinion. Buzziness at high speed can get a little annoying after several hundred miles, but overall it is very, very solid platform. Last winter I put roughly 1,000 miles on one in riding from the UK to Italy. I subjected it to sub-freezing temperatures, rain, snow, and hours-long stretches in excess of 120 mph (I was on the German autobahn) and it trundled on without complaint.

After that, my choice from the above list would be the Hayabusa. A lot of people will tell you it’s not a sport tourer but apparently that is what Suzuki was aiming for in designing it. British magazine Bike recently proved its tour-worthiness by riding one across the United States. Thanks to the Hayabusa’s popularity in the custom scene, you can find all kinds of aftermarket add-ons to make it a true cross-country warrior. For example, a number of companies offer side bags that fit the style so perfectly you’d think they were factory-designed; there’s a company called Motorcycle Cruise that makes a cruise control system for the Hayabusa (I’ve never tried it and don’t know anyone who has, so buy at your own risk); and I’ve definitely encountered plenty of ‘Busas with banging accessory stereo systems.

Whatever you end up choosing, the most important thing is that you enjoy the hell out of it. Welcome back to riding. We’ll see you out there!