How to Ride a Dirt Bike 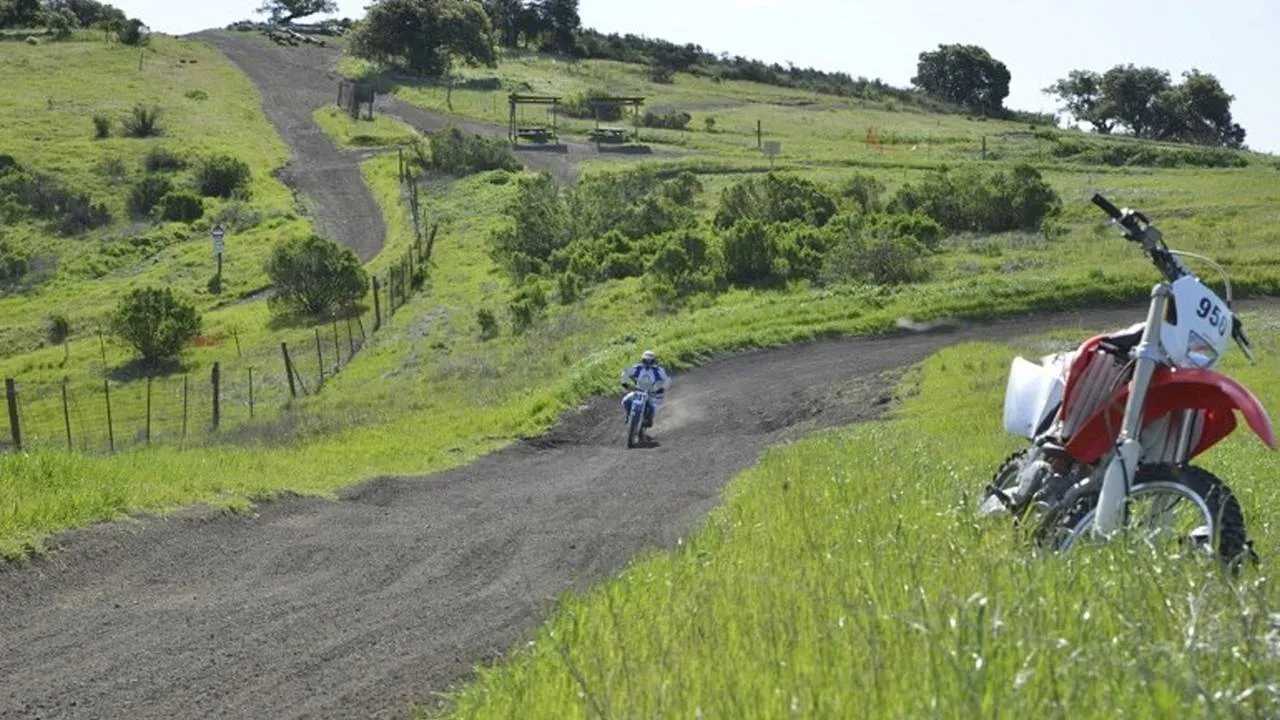 Learning how to ride a dirtbike can help you in all aspects of your riding career. It teaches you how to read the road better, how to control your bike too

Riding dirt never crossed my mind when I first moved out West. I was so immersed in road bikes, asphalt and twisty roads that I was content to be a street rider. But then, twisty roads turned into race tracks, and those tracks prompted me to actually race. Up until this point, I had tunnel vision: sportbikes were life, man.

Then, one day, I failed to get my road-racing license the first time I tried for it. At that point I knew I had to become a better rider, and a few folks told me that one of the best ways to improve my skills was to start riding on the dirt. The reasoning behind this is that the dirt teaches you how to feel what it’s like to ride on something that has less traction than pavement. Additionally, the dirt changes every lap (if you ride MX, TT or oval track), so you need to adapt your riding style on the fly. Finally, you must really be smooth with your inputs so you can stay upright. These reasons were enough to convince me to get out there and start riding dirty. I decided to take a school (because as we all know, I love riding schools) so I can start riding dirt the correct way, right out the gate.

You’re Going to Go Down

I must emphasize that it is imperative that you wear the right gear when riding off-road. Before I get into the specifics of how to ride a dirt bike, I'm going to share my thoughts on the proper equipment. Why? Because you’re going to probably fall…and if you’re like me, you’re going to fall down early and often. I’m not saying it’s guaranteed, but I’ve seen a lot of spills by first timers; I’ve also seen folks who rarely fall.

Oopsies! Crashing on the dirt usually doesn't hurt quite as bad as the street either.

The point is, you don’t know when or why you’re going to do it, just that the odds are that you will crash. So, just to be safe, get yourself a good set of elbow guards, knee guards, a chest guard, motocross or road racing boots, goggles, and a helmet. I was able to borrow a lot of these items from family and friends before actually having to go out and purchase them, so if you can’t afford to spend that much money on gear right away, ask your buddies if you can get a hold of some loaner kit first.

What Size Bike Should I Ride?

The first dirt bike I ever rode was Honda CRF150F. For me, it was the perfect size since it’s not big and it was fairly light, making it more approachable and easier to ride. After trying the Honda on for size though, I actually decided to go a little smaller and picked up a Suzuki DRZ125R. At that time, I not only wanted something small, but something that I could afford. As you will later see, I take this bike everywhere: I ride it on oval and TT dirt tracks, but also on trails and MX tracks with whoops and jumps. The little DR-Z can handle anything this grown ass woman can put it through!

Small bikes can handle a grown man, too. My pal Wiles and I getting dirty on our 125cc bikes.

However, I’m not advocating that you have to start on small bike. My husband picked up a full size Honda CRF250 and that bike’s insanely tall for me, but works perfectly for him. He learned how to ride on the big Honda and has rarely taken a spill on it. The point is, pick a bike you're comfortable handling.

Alright! Let’s get to riding. You’re on your preferred dirt bike, now what? If you come from a street background, you need to learn new body positioning techniques that are specific to dirt. Everything from how you sit on the bike to how you turn the bike is different. When you first sit on the dirt bike, make sure you sit all the way up on the bike—get your crotch as close to the gas tank as possible. From there you’re going to want to lift your elbows. I know—it feels super weird at first, but there’s a reason for it (I’ll get to it in a minute).

Once you get going and start taking a corner, you want to have your butt on the outside of the bike. You actually want the middle of your butt crack to be on the edge of the seat. For example, if you’re going into a left-hand turn that means you should have your butt off on the right. Additionally, when going into the turn, get that inside foot down to help with adjusting the bike’s lean angle.

Finally—and I can’t stress this enough—stay loose! Do not keep a death grip on the bars or straighten your arms; the more relaxed you are, the more the bike will do what you want it to do (in a good way). If you tighten up, both you and your bike will more than likely meet the ground at some point.

Dirt Trails are So Much Fun

When it comes to trail riding, you want to remember (again) to stay loose because you become a part of your bike’s suspension while going over uneven, rough terrain and whoops. To tackle such rough (yet fun) conditions, you want your butt off the seat (stand up). From there, you want to slightly bend your knees, get on the balls of your feet, and clinch on to the tank with your knees. Next, lean forward a bit and remember to stay loose. Again, I know it’s hard to do, but remember to tighten that core a bit when standing up.

When going up steep hills, make sure you have good momentum before climbing. Once you start your ascent, lean forward over your handlebars to make sure you keep weight on the front of the bike. You’ll also want to be in a lower gear to make sure you can get your bike successfully up that hill.

When going downhill, make sure to scoot your butt back as far back as you can. From there, use your rear brake and only a touch of front brake to modulate your downhill speed. Your gears are actually the best way to slow down when you're on a steep descent, but make sure you don't hold the clutch in while going downhill until you really figure out how to use your brakes effectively. If you simply pull in the clutch you remove any natural braking that occurs because of the engine compression, which will result in a freewheeling downhill blast that is sure to result in a panic situation and likely a crash.

It is alright to slightly extend your arms on the way down the hill, in an effort to help you keep your weight bias towards the back of the bike. Remember this is dirt bike 101, and as you advance your riding skills, some of these basic tenets will change a little bit depending on the nature of the terrain and the seed you are riding it. For now, take it slow and easy.

How to Survive Jumps on your Dirt Bike

Oh, jumps—we have this love-hate relationship. They really aren’t that hard, but sometimes, they are difficult to nail. I have to admit that I’ve hit the ground hard a few times when learning to jump. I've even flown off a berm and smashed face-first into a rock. However, I’ve had plenty of successful ones too. Jumps require a lot of practice to get confident and the key is to be consistent. I do feel like I’m getting better at them, and fortunately, I even learned how to do them during my schools.

Okay, so first you need to make sure you have good body positioning going: crotch to the gas tank and elbows up. Then, stand up on the bike (as I described earlier). Additionally, when you start the jump, make sure you're getting your butt back a bit on the seat (but not too far back) and get on the throttle. However, once you hit the jump, it’s important to hold a steady throttle; if you chop the throttle, the front wheel will drop. (This is commonly called "The Flying W," and is a signature move of the rookie dirt rider). Be careful here, because this is the fastest way to a broken collar bone!

There's a fine balance between too little and too much gas, too. If you give it too much throttle as you leave the jump, the front will come up. One thing that's important when you're first starting to figure out how to jump, is that you want both wheels landing on the ground at about the same time. In some instances you will have the rear hit first, but the front needs to immediately fall right behind it.

I'm yelling, "woo-hoo!" which is required to successfully land a jump (just kidding, sort of).

Remember the action of doing a jump should all be in one fluid motion: Get on the gas on the approach, back off a wee bit (not too much), knees slightly bent, butt back, yell "woo-hoo," and then land. Jumps can be fun, but as I mentioned above, the consequences can be painful if you don’t get it right. Make sure to stock up on ice when first trying it out!

Even though it requires a different skill set, dirt bike riding has definitely taught me to become a better rider and racer. It showed me how to digest information a lot more quickly since riding dirt requires you to react on the fly. Also, by riding in the dirt, you get to learn how to crash and how not to crash. The dangers are decreased a bit because the speeds are down, and the damage you do to your dirt bike is far less expensive than it is on the street. To this day, when I'm not getting the lap times I want on the race track, I hop on my dirt bike the next day; I know I can push my limits and can (hopefully) get back up to try again.