How one brave Canadian rider is hauling one-ton of special formula kibble over 2,500 miles to the hungry dogs in the Great White (far) North.

Hauling 2,000lbs of kibble on a modified 2017 CCM to the dogs of Canada’s remote Northern Territories

Recently the railroad that serves as a vital supply-line to the remote town of Churchill, Manitoba, in Canada's Northern Territories was severed due to flooding. This left the town largely cut-off from the rest of civilization for the first time in 90 years. Many of Canada's isolated villages rely heavily on these supply lines, so when something goes wrong, getting much needed provisions to these communities becomes a complete logistical nightmare. Accessing these remote arctic populations requires traversing countless miles of some of the least hospitable places on the planet where temperatures routinely dip well into the –50s, and is just a bit more difficult than popping down to the store real quick for a gallon of milk.

CHECK OUT: Bikes, Borscht, and Bad Roads - A Russian Journey

The Canadian government has stepped in to help get supplies to the area, but for obvious reasons humans take priority. This has, sadly, left the local dog population to mostly fend for itself. Recognizing how important these animals are to these communities, Oliver Solaro took it upon himself to graft a Camso DTS129 snow track kit to his 2017 CCM GP 450 Enduro which he will use to haul a literal ton of special formula, high-caloric kibble to the dogs in need. He will do so by pulling a traditional Inuit Qamutiq sled he constructed specially for the expedition behind the bike across more than 2,500 miles of snow and ice. 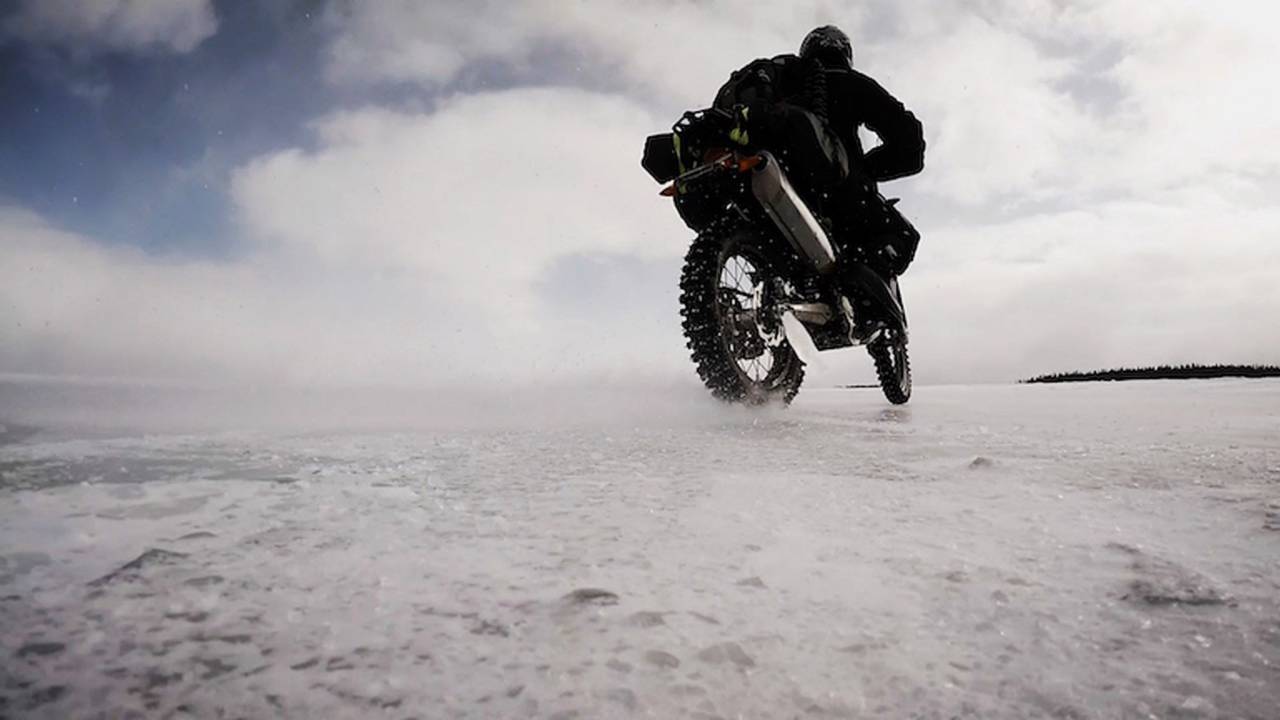 Five or so years ago, Solaro began taking long-distance motorcycle trips around Canada’s Northern Territories, utilizing the network of ice and winter roads that serve as vital supply-lines to the region’s remote communities and mining operations. Since then he has continued to take on increasingly ambitious arctic moto-trips, which has garnered him a decent amount of media attention, including dozens of interviews and an award-winning full-length documentary.

Upon hearing about the beleaguered dogs of Churchill, Manitoba, Solaro got to work crafting a plan to help. He started by reaching out to Corey Nutrition who agreed to donate 2,000lbs of their special work dog formula dog food. From there he called on some buddies at the Land Rover Adventure Club who agreed to join him on part of the trip as support vehicles for the endeavor.

Initially Solaro was in talks with Yamaha to get a loaner bike for the trip, but after Team Blue company backed out at the last minute, he opted to purchase a snow track kit out of pocket, and graft it to his personal CCM enduro bike – a machine the boutique marque has lent Solaro in exchange for real-world feedback on the bike’s performance in sub-freezing conditions. Come hell or high-water, Solaro was determined to make this work.

CHECK OUT: Video of the Day: Snowmobile vs Snow Bike

As you might expect, only a small handful of motorcycles are capable of properly functioning in arctic temperatures. The frigid climate makes starting an engine tricky, and at 30-below-freezing, most oil takes on the viscosity of Vaseline. Carb slides seize, rubber diaphragms crumble, wiring insulation crackles, and anything made of the wrong plastic shatters at the slightest provocation. This is the domain of massive battery power, robust electronics, and the sort of engineering never considered by Hiro and Klaus and the rest of the world's bike designers. It’s serious business where life and death can be decided by what happens when one thumbs the starter button. 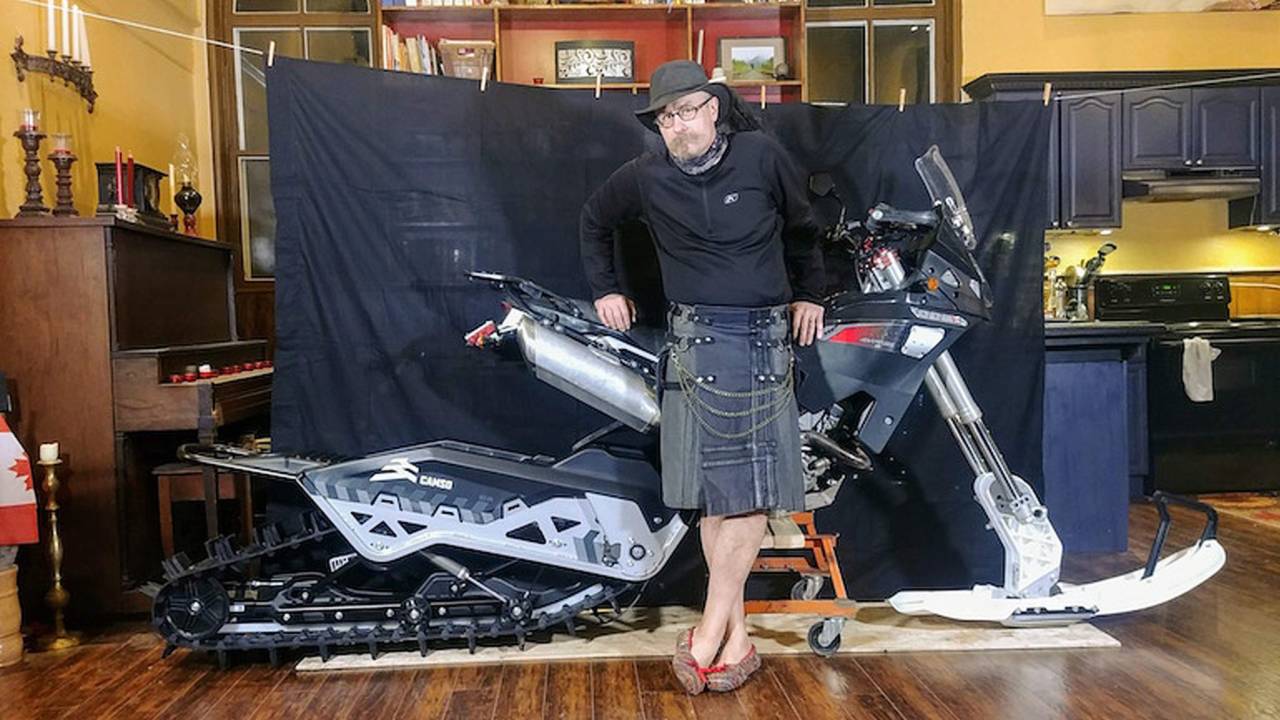 Oliver posing with his modified CCM GP 450. The Canadian regularly treks around on his bike wearing a kilt.

While the project’s logistics have been sorted out, the endeavor is still in need of additional financial support. Riding a snow bike 2,500 miles through the arctic dragging a ton of dog food isn't cheap. Fuel alone will cost Solaro around $2,500, and he had to shell out almost $3,000 for special arctic survival gear. That's not to mention food, lodging, and any equipment and parts needed along the way. Because of the urgent nature of the situation, time is extremely limited. Solaro is leaving Toronto, Ontario, by mid-February. The entire journey will be documented along the way, and updates will be sent out as the trip progresses thanks to the fact that these remote Northern Canadian villages apparently have surprisingly stellar Wi-Fi.

In addition to the wolves and polar bears – a very real threat that's prompted Solaro to carry a Mossberg 500 pistol-grip shotgun at all times on his trips – the cold is a serious hazard. Solaro, never uses any heated gear, relying instead on traditional, non-powered cold weather gear.

"I own some and it's great for use in the real world (referring to populated non-remote areas) but if it fails you're dead," he told me.

Solaro has had frostbite a number of times – which, to my ears, is far too high for how casually he relays that information when asked. He also had one of his eyes freeze leaving him half-blind for several days (Well that's a fear I didn't have until right now. –JM), and a myriad of other injuries as a result of his adventures.
Normally Solaro rides with regular motorcycle wheels and tires fitted with carbide studs, but the SunDog Project trip requires a bit more than just studded tires. Prior to getting his CCM loaner, Solaro completed his journeys aboard a Kawasaki KLR650. He also self-funds his trips and, aside from the CCM and some gear he got from Klim, he doesn't have any sponsorship deals of any kind. Until the upcoming aide trip, all of the 51-year-old's arctic expeditions have been, in his own words, "vacations".

The extreme nature of his journeys combined with the raw beauty of the frozen north make for particularly compelling videos, photos, and first-hand accounts. Lately, Solaro has taken to documenting his arctic travel exploits, sharing his unique experiences with various media outlets, on social media, and on his YouTube channel.

I always dig when motorcycle enthusiasts find ways to use their passion to enact positive change in the world, but Solaro's contribution is a pretty unique and selfless one. We're rooting for Mr. Solaro, and we wish him luck on what will be, at best, a long and brutal journey. You can Click Here to contribute to the Sun Dog Project. 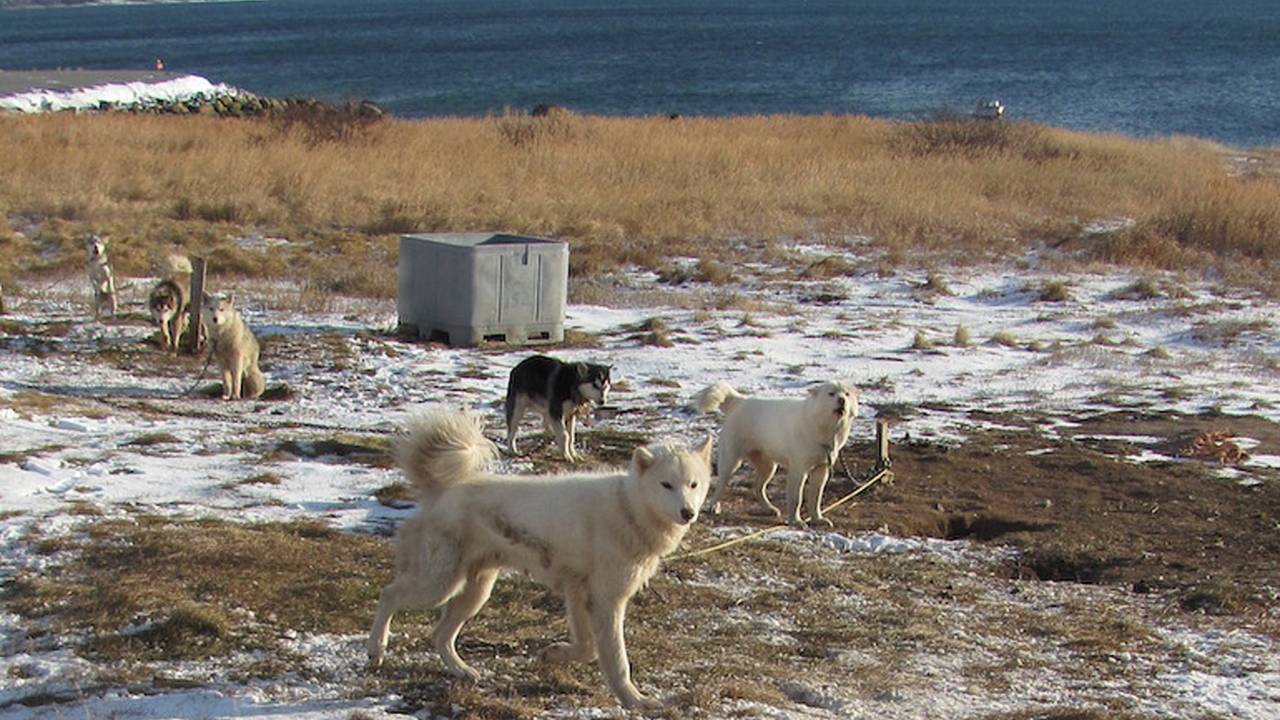 The hungry beneficiaries of the SunDog Project.