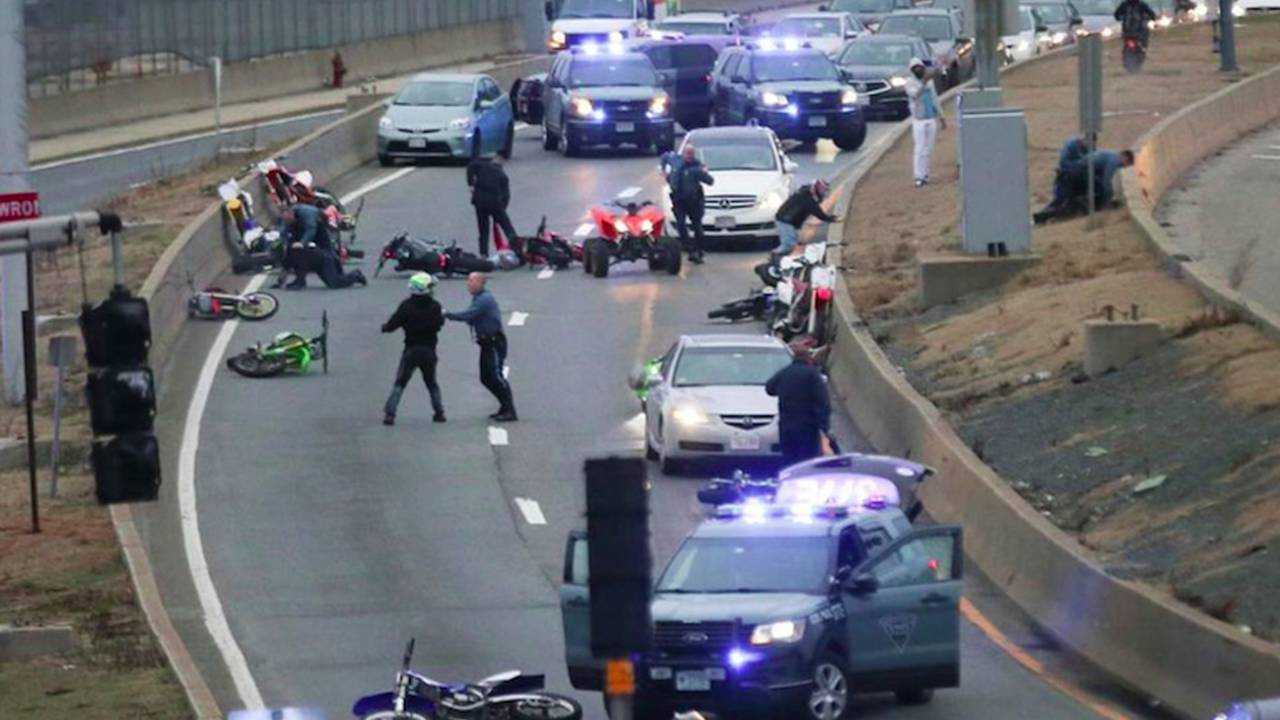 On Saturday evening pure chaos broke out on Massachusetts’ I-93 freeway when State Troopers tried to contain, block-off, and then corral and apprehend a group of around two-to-three-dozen individuals illegally piloting various dirt bikes and ATV’s. With the help of Boston police, a road-block was setup to trap the pack of riders, at which point, pure f****** chaos ensued.

Many metropolitan police departments around the world employ the use of what’s commonly referred to as a “no chase” or “non-evasion” policy, where in the event someone(s) attempts to evade police, said police back-off and don’t pursue the fleeing suspect in order to minimize potential harm to both the public, police, and even the suspect(s). Law enforcement will try to get vehicle information and a license-plate if possible (assuming the bike isn’t stolen), and a rider description in hopes of making an arrest at a later time or date.

In recent years residents of major cities have been taking advantage of these no chase policies, riding mostly off-road (non-street legal) vehicles around recklessly, almost always sans gear, license, insurance, or general concern for safety. Seeing large packs of mostly young guys riding around on various two-stroke dirt bikes and ATV’s is pretty common in some urban areas and has lead to a unique sub-suture. The acclaimed 2013 documentary 12 O’Clock Boys shined a light on this, capturing the antics of a Baltimore-based group of riders.

Obviously law enforcement isn’t happy about this, nor is the public in general, so major efforts (such as task forces) have been made to crackdown on this type of crime. This can at times be tricky to do in a way that doesn’t jeopardize the safety of everyone involved, so police don’t hesitate when they get the opportunity to clamp down on the illegal riding practice. So Saturday evening when calls began to pour into 911 about a pack of riders taking over public roads on off-road machines and riding recklessly, multiple police forces partnered up and jumped into action.

AMERICAN MOTORCYCLE LAWS: Why you shouldn’t do wheelies in Illinois

Police began tracking the group on the southbound side of Interstate 93, before finally pulling the trigger on executing a road-block trap around 5:15PM reportedly near I-93’s Exit 18. With police vehicles blocking the riders in from both the northern and southern sides, and large cement barriers covering on the east and west sides, many of the suspects were boxed in with nowhere to go, at which point a frenzy of chaos commenced as trooper tried to corral the scattering suspects. Riders desperately looked for a way out while riding in tight circles, many of them crashing and dropping their respective machines at low speeds.

Several individuals appear to fight back when law enforcement attempted to apprehend them, though supposedly in the end at least seven riders were arrested (albeit some sources claim the correct number is five) and 20 vehicles in total were impounded, the vast majority of which I assume were MXers and ATV’s though I did spot a Grom or two in some of the videos. A handful of suspects did however manage to find a viable escape route, as GoPro footage from one scooter pilot shows. The rider gets his bike up on the freeway’s elevated center-divider, rides past police vehicles, and then returns back down onto the freeway where he splits lanes, presumably to safety.

The Massachusetts State Police’s spokesperson, David Procopio relayed that in the commotion yesterday, one State Trooper drew his service weapon and fired a round that hit 28-year-old Aderito Monteiro in the left foot. At this time police have not revealed what prompted the trooper to open fire on Monteiro. That suspect was transported to Boston Medical Center where he was treated for the non-life-threatening injury and the Suffolk District Attorney’s office is now conducting an investigation of the shooting. In addition to the 28-year-old, another rider was reportedly injured in the scuffle and taken to the hospital for treatment, along with one trooper who was treated for a knee injury.

Boston’s Mayor, Marty Walsh spoke up after Saturday’s incident, stating,"They really take over our streets, they frighten people when they're out there riding around. They figure that they can go on the highway and I think that's a major concern." The Mayor also added that he felt Saturday’s events were an obvious indication that these types of groups are getting “bolder”. Upon releasing information regarding the events to the media, Mass State Police relayed that this type of activity puts the public’s safety in jeopardy. Back in 2015 Boston's Police Commissioner, William B. Evans "vowed" to crack down on the illegal use of road-road vehicles.

Then earlier this morning the Mass State Police released the identities of those arrested Saturday evening, as well as the various charges each of the seven suspects are being hit with. Edgar Dossantos Jr., 30, of Quincy; Josue Hidalgo, 23, of Worcester; Gustave Arceno-Rosa, 22, of Saugus; Shane Fein, 21, of North Attleborough; William Suliveras, 29, of Methue; Christopher Cabassa, 31, of Lawrence; and Aderito Monteiro, 28, of Randolph - who was the one shot in the foot - are being charged with offenses such as failure to stop for police; negligent operation; disorderly conduct; wrong way violation on a state highway; marked lanes violation; unlicensed operation; no inspection sticker; resisting arrest; careless operation in a tunnel; driving an unregistered motor vehicle; and driving an uninsured motor vehicle.

As per department policy, the officer who shot Monteiro has been placed on paid administrative leave pending the independent investigation into whether or not any criminal charges are warranted.  Meanwhile a handful of the arrested parties have been released form custody after bonding out despite a $100K bail. The incident remains under investigation and the accused are scheduled to appear in court later this week.

Motorcycle enthusiasts clashing with law enforcement is nothing new. While most riders don’t have any issue with law enforcement - outside of getting annoying speeding or lane-splitting tickets (for you non-Californians) - this kind of incident is just bad optics for the riding community in general, and definitely isn’t helping us riders’ relationship with law enforcement or the sense in which they view us. It appears our law enforcement agencies are trying to shut this type of crime down before it spirals out of control like it has with our brothers and sisters across the pond in the UK.