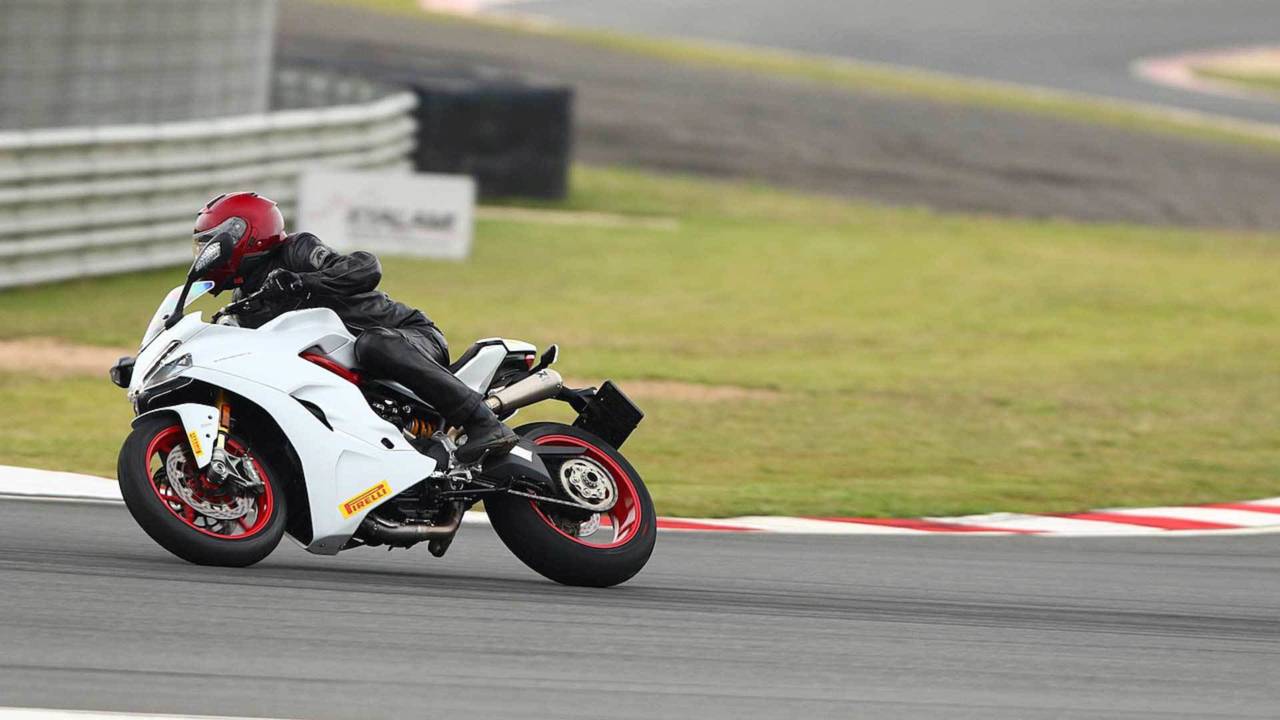 Chris has ridden thousands of miles but spent very little time on a race track. From the sound of things that's not going to change.

Midwestern rugby lacks finesse. That’s the truth of things at the Division II level, at least—it’s just a bunch of well-fed boys trundling into other well-fed boys. Which more or less explains how I ended up playing center for Eastside Banshees RFC.

RELATED: Why Wearing Racing Leathers on Public Roads May Be a Bad Idea

I wasn’t fast, I couldn’t side-step a house, but in weighing 50-100 pounds less than most of the other guys I had agility by default. I played for five seasons before being serendipitously retired by a major concussion. I didn’t complain when I was advised to quit; the weekly experience of getting the tar kicked out of me by well-fed Midwestern boys had lost its lustre. As had been the case when I’d played football, and baseball, and soccer, I found I didn’t mesh well with aggressively competitive people.

Huge thanks to Pirelli, who recently gave me an opportunity to ride at South Africa's Kyalami Circuit.

There had been this one guy on my team who got under my skin particularly. He was a good, tough player—fearless when running the ball—but, Lord, was he a yeller. He played fullback and would hang out there behind us screaming his lungs off for the whole. damn. game. He was too much.

I think of that dude when I think about track bros: unnecessarily competitive, and so narrowly focused on a single objective (winning/riding fast) that they detract from others’ enjoyment of the activity. Track bros see track riding as the alpha and the omega. They weight your value as a human being on your ability to huck a 1000cc supersport into a hairpin corner.

RELATED: How to Reply When Someone Tells You Motorcycling is Dangerous

The track bro is the guy who will show up in every internet discussion about new riders or how to build up your on-road skills and insist that the only way to become a good, proficient rider is to “get to the track, bro.” It’s a piece of advice that annoys me.

Riding on a track on your own is fun, but unfortunately you usually have to share it with other people.

Ostensibly, the track bro is not wrong. Race circuits provide somewhat controlled environments (no oncoming or cross traffic, and usually a very clean and well-laid road surface) where a rider can push him- or herself to the limit of ability. Doing this repeatedly, when combined with self-reflection and analysis, has the potential to extend that limit further and further. Theoretically, then, techniques developed when riding at 100 percent can be applied to road situations, where you should never be riding in excess of 70 percent of your ability (you have to leave something for dealing with the unknown unknowns).

But I have a few issues with the “Riding track makes you a better road rider” philosophy. There are still some highly volatile aspects, namely: track bros. Sit and listen to them talk long enough and they’ll eventually brag—either overtly or indirectly—about doing something dangerously aggressive: bumping shoulders/knees in a turn, hitting another rider’s kill switch, buzzing a rider for going too slow, etc.

I don’t need that in my life. Especially considering the cost outlay.

Most of my track experiences have been in connection with press events. I'm not sure I'd pay my own money for such a thing.

Firstly, there is the expense of your bike. Most insurers will not cover track bikes, so if you send your pride and joy a wanderin’ in a chicane you’ll be paying every penny necessary to restore it to health. Not to mention the cost of tires, and the cost/challenge of getting your track bike to said track.

Secondly, there is the gear. Racing leathers are crazy expensive, yo, and unlike other moto gear they don’t lend themselves as well to multiple uses. You don’t tour in racing leathers, for example. And if you wear them on a sunny Sunday road ride you just look like a tool.

“Hey, check me out in this Dainese Mugello R D-Air suit—exactly the sort of thing I need for going 20 mph through Hereford town center. Never mind the fact my Panigale has almost no steering lock, so I can’t lane split as well as that 16-year-old on a Keeway Superlight…”

Much of track riding goes against my own reasons for getting involved in bikes.

Thirdly, there is the cost of a track day: it's a lot without any instruction, and a whole hell of a lot with it. Because you're not rich, it's more than likely going to be just you on your bike, hurtling around amid a pack of people who are faster than you and quite possibly negligently homicidal.

In other words, track riding is prohibitively expensive as a skills-improvement exercise. It’s like skiing. Skiing is great for your mental and physical health, but it’s also expensive as hell. So, if you’re only in it to get fit, you’d be better off taking up running or DDP Yoga. If you’re heading to a race circuit because some track bro told you it’s the best way to improve your road riding skill, you’d be better off taking a road-focused riding course.

Don’t get me wrong, like skiing, riding track is a whole hell of a lot of fun. When all the little pieces come together—you and the bike interacting symbiotically—it’s a pretty special feeling. But… ah… like skiing, motorcycling is something I do for solace. I’m a naturally high-strung person, and one of the reasons I ride a bike is to relieve anxiety. That’s not going to happen when I’m stressing about money and whether some track bro is gunning to ruin my day.

I’d rather be out on the road—on my own, and away from the “safety” of a track.

In fairness, one advantage to track days is they give you a chance to find out just how awesome a bike like the BMW S 1000 XR really is.