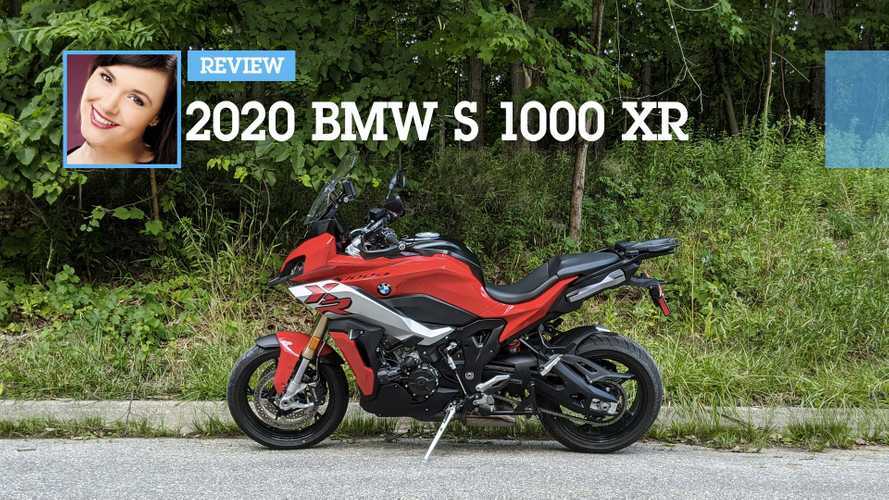 The good, the bad, and the ugly.

BMW Motorrad hit EICMA 2019 with a trio of new bikes—two brand-new 900 twins and a fully-redesigned, second-generation S 1000 XR. The House of Munich advertised the new XR as being lighter, faster, and more versatile than its predecessor.

I was understandably curious to find out what all the hype was about and just how “lighter, faster, better” the bike really is. After a week in the saddle, however, I can’t help but have a few concerns about how the previous generation performed because this new and improved XR is far from perfect.

BMW significantly updated the S 1000 XR’s design for 2020. The bike’s mandible-looking beak is now more prominent, and topped with a pair of smaller, meaner-looking LED headlights. While the former generation had a sportier profile, the new model is taller and narrower which creates a slenderer, more “adventuresque” silhouette.

The design is front-heavy with a cluttered mid-section that starts on the sculpted front end and ends on an airy, floating tail. The compact muffler helps to keep the rear portion clean and streamlined. That being said, BMW made it all work and the result is a handsome, muscular-looking bike.

Thanks to several weight-saving measures including the lighter frame, suspension components, and engine that also doubles as a stressed member, the XR is 22-pounds lighter than the outgoing model and now tips the scales at 498 pounds wet.

The ergonomics were a bit of a, let’s call it, “interesting” experience for me. On the one hand, the XR has one of the most comfortable saddles I’ve been on. The narrow-to-wide, upswept design cradles the buttocks perfectly. The shape compensates almost entirely for the seat being pancake-thin and rock-hard, resulting in a surprisingly comfortable ride.

However, the handlebar setup was a little awkward for me. It’s positioned just forward enough that you have to lean in ever so slightly, and the grips are further apart than shoulder width which creates, at least in my case, a slightly unnatural geometry.

When you look at the numbers, sure enough, BMW pushed the bar forward by a little over an inch and lowered it. Perhaps the most unsettling realization is when I read that this new handlebar design is also narrower than its predecessor.

Overall, however, the bike is comfortable and spacious. Once you’re in the saddle, it feels like you’re sitting on a much larger bike. There's plenty of legroom between the 33-inch saddle, the narrow fuel tank with wide knee dents, and the foot pegs, the latter of which are shifted slightly forward in relation to the seat. We’re not in forward-controls territory here, but by moving the pegs ahead, it elevates the knees, creates a softer bend, and makes an efficient use of the large dents.

Aside from a handlebar that’s a little too wide for my taste, in true sport-touring fashion, the XR offers one of the best, most comfortable riding positions out there. It’s one you won’t mind keeping for a few hours on end.

Considering just how sporty the S 1000 RR is designed to be, I kind of expected the XR to be a straight-sitting wild beast with a mind of its own. I was wrong—the Bavarian inline-four is far more manageable than I anticipated.

Sure, the engine itself is the same 999cc inline-four found in the S 1000 RR, minus the ShiftCam variable valve timing technology. BMW slightly detuned the mill and modified the gear ratio to give it a more touring-friendly behavior. The 4th, 5th, and 6th gears are longer to keep the revolutions lower at cruising speeds and to improve fuel economy.

In the XR, the inline-four produces 165 horsepower and 84 lb-ft of torque. The delivery is nice and linear, even when you twist the throttle with enthusiasm. The power is responsive and ready to be used but not aggressive. You can accelerate with confidence—either from a standstill or when already in motion—knowing that gunning it won't mean losing control of the front end.

Manageable doesn’t mean boring, though. The XR definitely wants to go fast and will try to seduce you into risking your license but not in a brutal, impulsive way. It will sneak you there and the next thing you know, you look down and the number you see is higher than you expected.

Handling-wise, I found the bike irreproachable. There’s good feedback in the handlebar and the steering is precise. Though the suspension is on the sportier end of the spectrum, with the Dynamic Electronic Suspension Adjustment (DESA) in Road mode, the XR glided over challenging bumps with elegance and ease.

As for the four riding modes, I didn’t find that they significantly altered the bike’s behavior, if only by making the engine’s response slightly more or slightly less.

Though the engine deserves all the praise in terms of performance and handling, it feels like you have a hive of angry bees in each handgrip. It’s actually surprising how much vibration there is in the bar, especially considering that BMW reorganized the gear ratio and added rubber bushings to help mitigate it. If, like me, you don’t deal well with buzzy handgrips, then you might want to rethink your interest in the XR.

Oh, and on top of it all, let me tell you, folks, that engine is toasty. I suspected the engine to be liquid-cooled but considering how hot it got, I had to double-check with BMW that cooling duties weren’t left to air alone. It’s a lovely quirk of the engine if you have to ride on a cold day, but in the middle of summer, idling was almost suffocating. Once I got going, however, the heat quickly dissipated. Yet another testament to the bike’s highway purpose.

Since this second-generation BMW S 1000 XR is considered an improvement over its predecessor, I'm surprised that there was a second-generation at all. I’m increasingly convinced I would have had very passionate opinions about the first model. One thing’s for sure, I’m not sold on this second one.

The bike has a lot of great qualities, but also what I consider to be some considerable flaws. Sure, compared to other inline fours, the XR has more character if we can call it that but that’s maybe a little too much character for my taste. If the heat and buzz aren’t enough to deter you from seriously looking into getting your hands on one, be my guest. If you can overlook the quirks, then I think you’ll enjoy the bike. I’ll gladly skip my turn and let you have yours—I’d opt for the 900 instead any day.