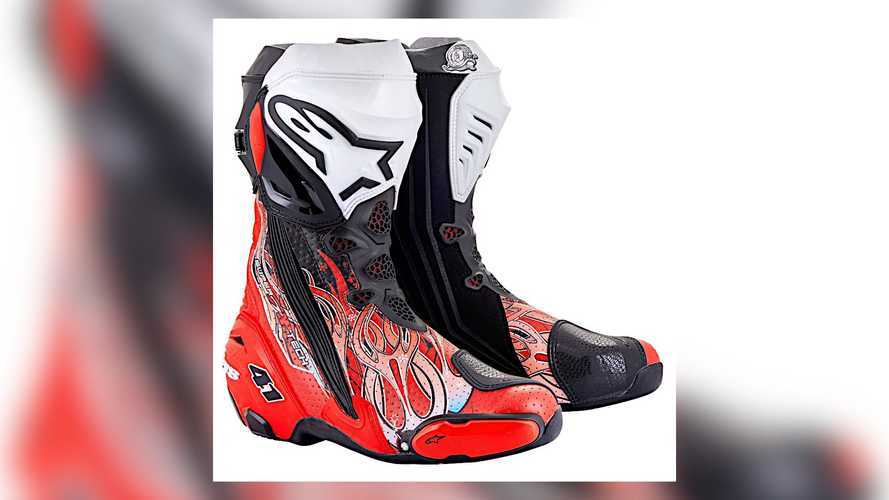 Stay cool while you heat up the track like Nitro Nori.

New year, new Limited Edition Alpinestars Supertech R race boots to get excited about. In 2019, it was all about the famous yellow and black Kenny Roberts Yamaha livery. For 2020, the fiery red, black, and white to honor Noriyuki Haga wraps these Supertech Rs in brightly colored protection that can’t be ignored.

Haga, also sometimes nicknamed “Nitro Nori,” was a fierce competitor. If you watched him race, you probably remember this for yourself—but even if you didn’t, he’s one of the most winning riders in World Superbike to never win a championship title. He took 43 race wins in all, finished second in the championship in three different years, and finished third in the championship an additional four years.

If you’re looking for a pair of Haga tribute boots to go with your 2003 Aprilia RSV Mille R Haga Replica—of which only 300 were ever sold worldwide; we’re not sure these boots are quite that limited—these may not be it. I mean, there’s not a single fleck of blue to be seen on these boots, with the predominant color being a rich, fiery red.

Still, the Supertech R has evolved over time, and is currently still riding on its 2015 revision for this new colorway. It features a compound rubber sole, an updated ergonomically profiled shin plate, and a redesigned front flex area. Microfiber and TPU dominate its construction, with an integrated and replaceable co-injected TPU/aluminum toe slider. The Haga boots are vented, with strategically positioned vents in both the shin and the heel to guide air through the boot and keep your feet cool.

Crucially on the protective front, the Supertech Rs also feature a bio-mechanical ankle brace that cooperates with the outer structure of the boot, so you have full movement to race, but also top protection in case of a crash. Sizes 42 through 46 are currently listed on the Alpinestars website as “coming soon,” with an MSRP of $529.95.

Alpinestars Gets Technical With Its 2020 Street Gear
++