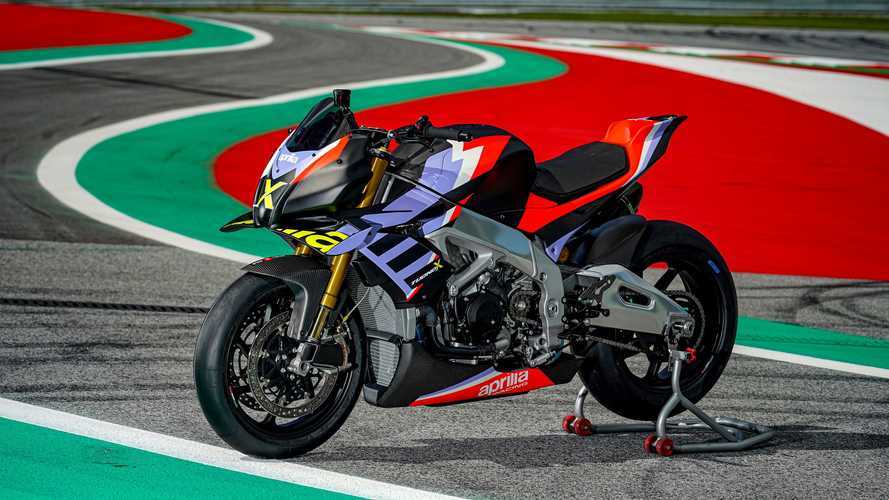 It’s a little more than a year since Aprilia released its super-limited track-only RSV4 X back in March, 2019. However, in grand Aprilia tradition, where the RSV goes, the Tuono will probably follow—even if it takes a little while. As of August 28, 2020, the Aprilia Tuono V4 X is available, and the good news is, this hypernaked is as formidable as you’d hope.

Like the RSV4 X—of which only 10 were ever made, and which all sold out within a few hours—the Tuono V4 X is also a numbered, limited-edition bike. This bike features a ton of carbon fiber, wrapped in beautiful Bol d’Or graphics, inspired by the Aprilia RSV 1000 R Factory that competed in the 2006 event.

We all know some basic bike math, right? Lighter weight + increased power = improved performance. To that end, Aprilia kept the same basic Tuono tank shape, but made it even lighter weight. Clutch and brake levers are billet aluminum, as are the engine crankcase guards, adjustable footrests, and the fuel filler cap. The Noale team also fitted Marchesini forged magnesium rims to the Tuono V4 X, clad in track-ready slick tires, of course. A full Akrapovič titanium exhaust with a carbon fiber pipe helps maximize your power and sound good while doing it.

Speaking of power, the engine is of course derived from the RSV4 1100 Factory unit, with unrestricted engine mapping from the factory. It makes a claimed 221 horsepower at the shaft—up from the 217 horsepower of the standard unit. As you’d expect from a hypernaked, it’s also hyper-lightweight—weighing in at just 166 kilograms—or just under 366 pounds. With all that power, you’d better have a good brake setup to help you keep everything under control. Luckily, a set of Brembo GP4-MS calipers are up to the task.

As you can guess, the Aprilia Tuono V4 X isn’t cheap. It costs 34,900 Euros, or about $41,538, and you can only buy them directly from Aprilia via their website. If you are one of the lucky buyers, you’re invited to pick your new Tuono V4 X up directly from Noale, while you pay a visit to the Aprilia Factory Racing Department. Not bad! Feel free to tell us about your experience if you do this, by the way.