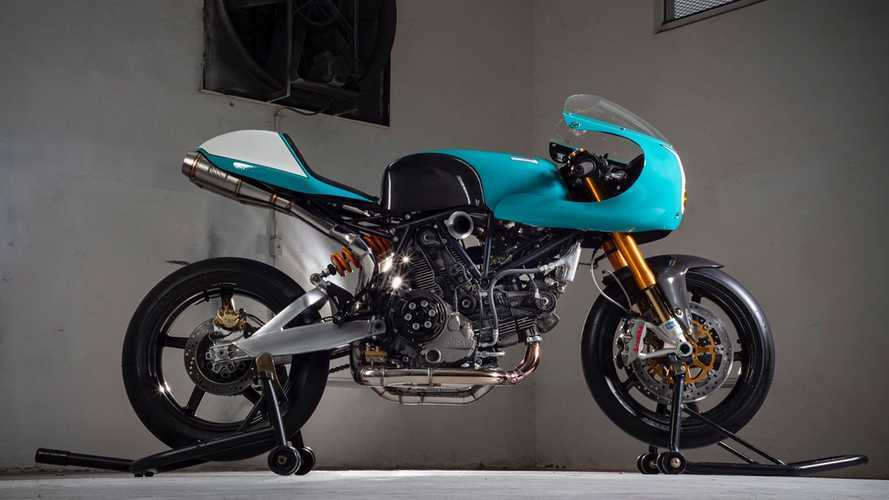 When it comes to custom motorcycles, I'm a big fan of Ducati cafe racers. There's something about the way the extremely high end fit and finish of an old Ducati simply compliments the whole cafe racer aesthetic. Especially when fitted with a racy bikini fairing like the bike featured here today, well it goes without saying that I have myself a new wallpaper for my phone.

This custom Ducati 1200SS comes to us from Scales Studio, based out of Miami, Florida. Featured on Return Of The Cafe Racers' newest podcast, dubbed The RETROspective, the full story of this amazing build can be checked out over there. Scales Studio, headed by Trever Scales, has been customizing bikes for quite some time now. In fact, a few of their bikes have gained popularity over the years. However, this custom Ducati 1200SS is extra special.

Trever Scales explains that the bike has a total of around 1,400 man hours put into it. Built for a customer with a flare for rare Ducatis, the bike started life as a mint 2005 Ducati 1000SS. Being one of only 80 bikes imported into the U.S, the fact that around half of these bikes were converted into race bikes, makes a stock 1000SS even harder to come by.

Of course, as is the case with ultra rare, top spec machines, what do you do to them? Well, you chop them up, of course! For starters, just by looking at it, you can tell that this custom Ducati is wearing a bespoke tank and seat assembly. The tank was inspired from MV Agusta's race machines, and was crafted using four layers of carbon fiber. It's been kevlar lined for maximum durability as well. The front fairing was also customized to house asymmetrical PIAA headlights on its nose.

Perhaps equally as impressive as the bespoke bodywork, the Ducati's 992cc motor was swapped out in favor of an 1100cc engine from a Ducati Hypermotard. If that added punch isn't enough for you, Trever and his team bored out the engine even more to have a final displacement of 1200cc (hence, the alteration in its name from 1000 to 1200). This was done by porting the heads, and fitting NCR race cams. Of course, all these mods add up to sizable performance gains, all of which are managed by a Microtech ECU.

Overall, the bike didn't just receive a total makeover in the looks department. Trever went on and concluded that the bike performed better overall in every single aspect after their slew of modifications.