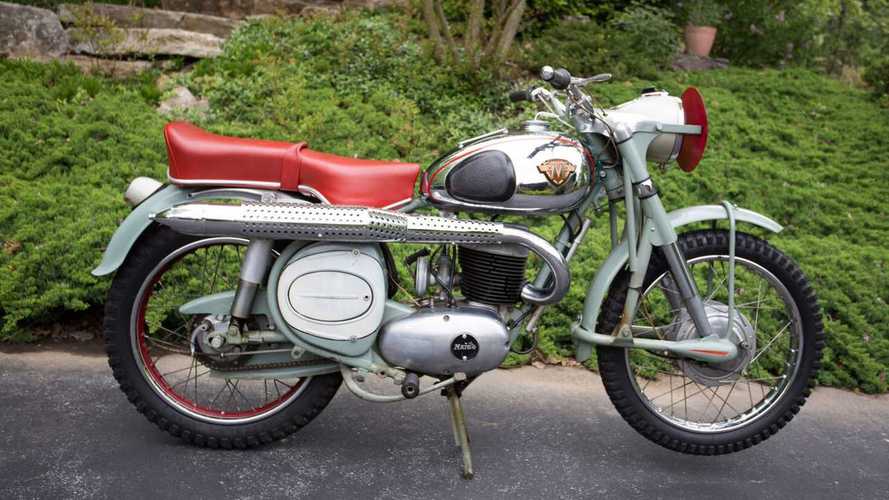 Would you want an off-roader with pastel paint and chromed bodywork?

Some vintage bikes hit the market covered in barn dust and pigeon guano, with no real information on their origins. Others show up on the auction block with decades of family history, and obvious loving care. This 1957 Maico Enduro 250, which has been with its original owner for 47 years, appears to be the latter.

Currently up for grabs on Bring a Trailer, this Maico Enduro 250 might look like a rickety, old-school ride, but would have been a potent off-roader in its time. Maico was a West German brand, founded in the 1920s and manufacturing machines through 1986. In the post-war enduro and motocross boom, Maico built race-winning dirt bikes as well as scooters, and even microcars. Since its ‘86 shutdown, Maico has become a stereotypical zombie brand, with investors trying to reboot the company with recycled technology.

Looking at the Enduro 250, you can see how far we’ve come in the past 60 years of motorcycle development. Today’s dirt bikes have gaudy neon plastics, but the Maico has pastel paint and chromed bodywork. The Maico has shiny, enclosed dual rear shocks, and drum brakes front and back, instead of modern monoshock and disc brake setup. It looks like a bike that’s made for showing off, not going fast, but in its time, it did both.

The contrast between old and modern technology is everywhere. There’s an Earles fork, instead of the USD forks you find on modern dirt bikes. Instead of a straight seat, allowing easy weight shifting, the Maico has a stepped seat that’s better for two-up riding. Almost every current off-roader has electronic fuel injection now, and more expensive bikes come with multiple power modes. This old Maico comes with a Bing carburetor, and that’s it.

As you’d expect with an old-school Euro off-roader, the Enduro 250 has a two-stroke, single-cylinder engine and a four-speed gearbox. This particular engine appears to have extremely low use, as the bike’s odometer only reads 15 miles. The seller claims to have bought this from a Maico dealership as it closed in 1973, and stored it ever since. The engine still starts and runs, though. But would you ride it, if you bought it? Good luck restoring this bike to original condition, if you had even a low-speed tipover in the dirt.