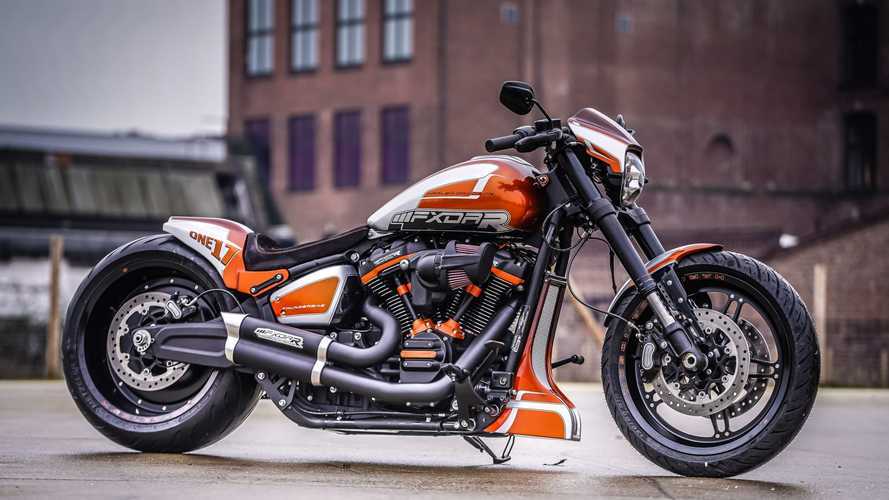 Turning heads no matter where it goes.

Harley-Davidson pulled the plug on the V-Rod in 2017. With a revamped Softail platform on deck for the 2018 model year, the Motor Company’s love child with Porsche no longer had a seat at the family table. Fans of the liquid-cooled, overhead-cam motor mourned the loss of the V-Rod but Harley had a card up its sleeve. After a year of grieving, the Motor Company courted power cruiser diehards once again with the FXDR 114.

As a member of the new Softail range, the FXDR housed a 114ci (1,868cc) Milwaukee Eight at the core of a reworked chassis. To achieve the long lines of a dragster, Harley designers raked out the front end to 34 inches. New streamlined bodywork and a lighter swingarm imbued the model with a performance-oriented style, even if most of that performance came in a straight line. When a customer commissioned German Harley dealer Thunderbike to create a one of a kind FXDR, it new the muscle bike was the perfect canvas for its vision.

About 50 minutes outside of Essen, Thunderbike Harley-Davidson is known for its custom creations. The Hammikeln-based shop made splash in 2019 with its “Roar” build for Harley-Davidson's Battle of the Kings contest. The project made such an impression that a customer requested an exact replica with a gloss finish instead of the matte paint scheme on the competition bike.

For the “Roar” doppelganger, Thunderbike’s team of builders started with its proprietary Air Ride suspension. The monoshock’s adjustability allowed the customer to slam the rear of the bike when it wasn’t in service and dial it to their liking when on the road. To beef up the back end even more, the builders wedged a monstrous 260 mm Metzeler tire onto the FXDR’s stock rim. The combination results in an aggressive stance that looks tailor-made for the drag races.

Of course, Thunderbike couldn’t make the FXDR look fast without actually making it faster. To boost the torque and horsepower of the 114 Milwaukee Eight, the team bolted on Harley-Davidson's Screamin’ Eagle Stage 3 kit. The performance kit not only increased the engine’s displacement to 117ci (1,917cc) but also bolstered the power by nearly 40 percent.

In addition to its custom builds, the German dealership produces its own line of Harley aftermarket parts and numerous bolt-ons made it onto the project. From the front and rear fender to the exhaust system to the chin fairing, Thunderbike put its build quality on display with the ONE 17. Aftermarket accessories from Harley-Davidson's Dominion line also accent the paint with a brushed black finish. While the V-Rod is long gone, Thunderbike’s ONE 17 proves that its spirit still lives on.