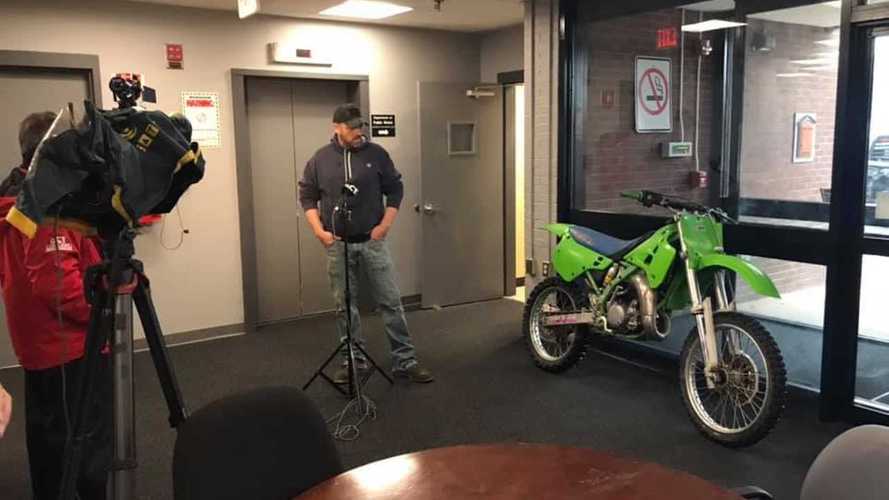 Imagine getting your childhood motorcycle back.

Imagine being a teenager, bombing around on your brand new 1990 Kawasaki KX125 dirt bike. Imagine the crushing disappointment you'd feel if, just two years later, your beloved bike got stolen, never to be seen again. Then imagine, 27 years later, getting a call from the police department that they'd just recovered your bike. It may seem like a fairy tale, but this actually happened, happy ending and all.

The Hartford, Connecticut police recovered the KX125 when its rider blasted through Bushnell Park, in the heart of the capital city and most definitely not an approved off-highway vehicle area. Per standard procedure, they checked the VIN and ran it through both the National Crime Information Center (NCIC) and the National Insurance Crime Bureau (NICB) databases. The NICB database found a match in a police report from nearby Waterbury, Connecticut, filed in October 1992.

It's an old bike that has no doubt been used and abused during its long life underground. The Hartford police still did their due diligence, however. After a bit of digging, they managed to track down the original owner, now 44 years old, and inform him that they had recovered the KX125 he had when he was a kid. They returned the stolen bike to him.

Despite its sketchy history, the bike appears to be in excellent condition, unlike most stolen motorcycles. The Hartford police did not identify the original owner. While he accepted the return of his old bike, we don't know what he intends to do with it. Perhaps he now has kids of his own. Maybe he will hand his old bike down to them to experience riding as he once did—hopefully after a few victory laps, wheelies, and jumps of his own.