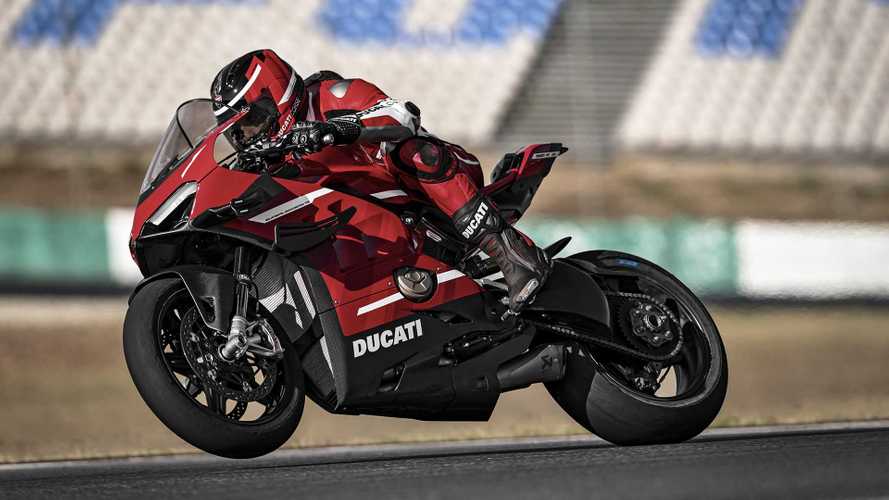 After weeks of teasing, Ducati finally unveiled the latest addition to its lineup—the all-new 2020 Panigale V4 Superleggera. This very exclusive and very expensive motorcycle is just as gorgeous as we all expected it to be.

Our suspicions were confirmed when a few select Ducati VIPs received an e-mail signed by CEO Claudio Domenicali himself, introducing Project 1708. The e-mail contained a link to a page listing all the special model’s spectacular specifications, features, and pricing.

We finally get our first official look at the exclusive model and it was worth the wait—that’s if you’re on board with the whole premium Panigale thing. Looks-wise, the Superleggera is pretty much a carbon fiber-clad Panigale V4 R. It features a pair of biplane winglets for optimal aerodynamics that produce a claimed downforce of 110 pounds at 168 mph. The fairing is wrapped in a Desmosedici GP19-inspired livery.

The Superleggera is the most powerful ride to ever roll out of the Borgo Panigale factory thanks to its 224 horsepower, 998cc, V4 Desmosedici Stradale engine. The model wouldn’t be worthy of the Superleggera appellation without some serious weight-saving measures involved.  The Panigale’s diet regime makes ample use of carbon fiber (including the frame and swingarm), magnesium, aluminum, and titanium component,s resulting in a dry weight of 350 pounds. This results in an insane power-to-weight ratio of 1.41hp/kg. For comparison, the 1299 Superleggera was rated at 1.378.

So. Much. Carbon fiber.

The suspension consists of an Öhlins pressurized fork and titanium shock while stopping power comes from a set of Brembo brakes with Stylema R calipers. The bike features three pre-set and five customizable riding modes as well as a lap time tracker. The Superleggera also comes with a racing kit that includes a track-specific Akrapovič exhaust that boosts the power to 234 horsepower and gives the rider access to the RaceGP display, inspired by the Desmosedici GP20 display and limited to track use.In addition to the bike, buyers will be offered a chance to put the Ducati’s WSBK Panigale V4 R as well as the new Desmosedici GP20 to the test on the track.

Only 500 units of the special model will be produced at a rate of five produced in a day. Ducati expects to produce all ordered units before the end of 2020. While the release doesn’t confirm the model’s pricing, the specifications sheet leaked earlier in January indicates the bike will go for $100,000—something to keep in mind if you have one or a thousand Ben Franklins to spare. The House of Borgo Panigale expects the first deliveries to take place in June 2020.