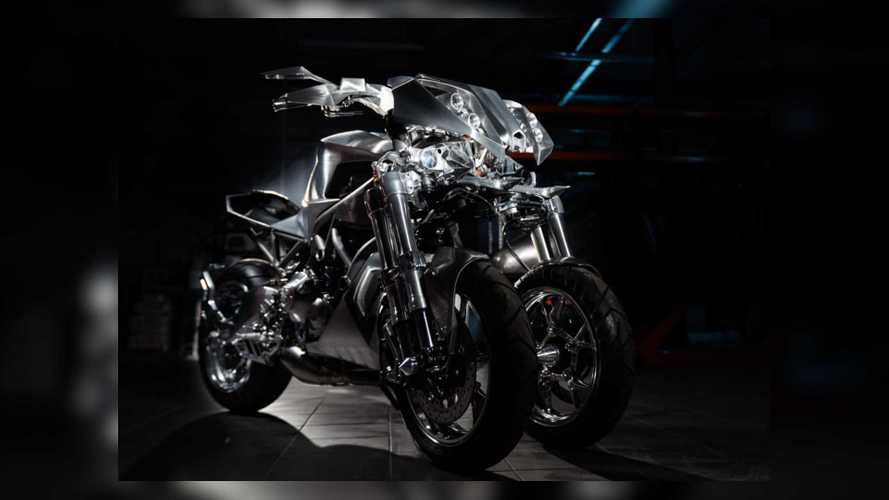 Look out, it's headed straight for us!

What makes a custom motorcycle special? It’s surely a combination of things. Like other forms of art, the further out on a limb you go, the more likely it is that your design will be divisive. At the same time, even if you can totally appreciate the amount of time and effort someone clearly put into a build, you can’t love every custom build you see.

Case Of The Niken: Are Three Wheels Really Better Than Two?

Somehow, though, it feels more personal when it’s a custom build. If you hate the aesthetics of a production bike, that’s one thing. Maybe a particular designer was the guiding force on that bike, but it still feels more like you’re being critical of a faceless corporation, and not a person. Game Over Cycles, a Polish customizer, teamed up with Yamaha Motor Poland to create the world’s first custom Niken, and it’s … something.

First unveiled to the world at Custombike Show 2019 in Bad Salzuflen, Germany, this custom bike was shown in a field comprised of over 1,000 other customs. Among those, GOC reports, this custom Niken won the show’s “Craziest Bike” award.

"Niken, to many people is revolutionary, to others a controversial bike. This is exactly how people also react to our custom bikes, that's why I got interested in it right from the beginning,” GOC head Stanislaw Myszkowski said in a Facebook post.

“In terms of technology nothing should be changed in this machine. The Japanese technical solutions at the highest level provide Niken's great driving abilities, but from the first moment I saw it live, I felt we could modify its appearance and give the machine a little different character,” he explained. “To achieve this we changed the whole body. All plastic elements have been replaced by aluminum, thanks to which the vehicle's shapes have become more sharp, even aggressive, without losing its aerodynamic properties.”

As I believe I’ve mentioned here before, I love well-used bare metal. I think it isn’t used enough, in fact. Most of the time, I don’t want to see it covered up—just brushed, shining, and gorgeous. GOC said that the bodywork on this bike represents over 1400 hours of work—and it shows. That said, there’s something ultra-menacing about this bike, like it’s not actually aluminum but is, instead, a mimetic polyalloy T-1000 lying in wait, to morph yet again and kill us all.