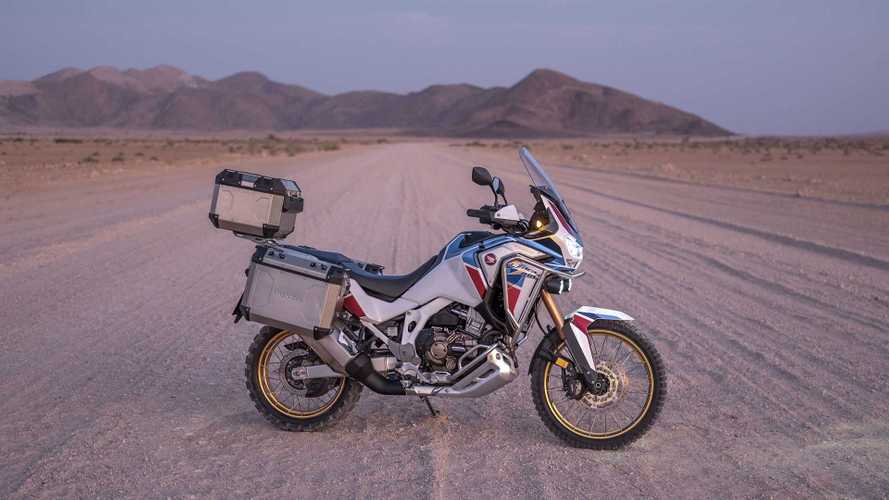 Adventure has a new face.

Honda’s highly anticipated adventurer entered its second generation with the introduction in September of the all-new CRF1100L. The company has not only made the model more powerful and Euro5-compliant, but it has also managed to make it slightly smaller and lighter in the process. The model was introduced in four variations, the standard Africa Twin with and without DCT as well the Africa Twin Adventure Sports, also with and without DCT. Let’s have a closer look at the fully-loaded Adventure Sports.

We Got Our Hands On A Pair Of Hondas:

Honda re-introduced the Africa Twin to its lineup in 2016, after over a decade of absence from the market. From a 750, the model made a comeback as a one-liter model, gaining in power, weight, but also in refinement. The late 80s Paris-Dakar winner was revived with a more tarmac-friendly personality.

After three fruitful years on the market, facing increasingly more stringent emission standards, the model was sent back to the drawing board. Rumors that Honda was developing a new, bigger CRF1000L started making the rounds as early as February 2019. Finally, in September, the manufacturer unveiled a new generation of the Africa Twin and Africa Twin Adventure Sports, armed with an all-new 1084cc twin mill. This increases the model’s output to 101 horsepower and 77 lb-ft of torque.

Look-wise, the changes aren’t as dramatic as they could have been—you still recognize the bike as an Africa Twin. The front fairing has been slightly altered with a new headlamp shape and a higher-set nose. A new, larger skid plate wraps around the exhaust pipes.

The underlying chassis has been revised to be more rigid, improving the model’s off-road capability. The new subframe is based on the CRF450R’s and has been designed to improve rear wheel traction and feedback.

While the engine gained in size, the bike itself reduced in size. The standard Africa Twin now weighs in at 498lb while the Adventure Sports model is 2 lb lighter than the 2019 model, weighing in at 530 lb. Weight-saving measures include a lighter chassis, subframe, gearbox, and swingarm, among other things.

Seat height has also been lowered for easier access. On both versions of the Africa Twin, the standard seat height is now of 34.3 inches with a low setting of 33.5 inches—on the Adventure Sports version, this represents a 2-inch reduction in height.

The 21 and 18-inch wheels are equipped with a 310-mm dual wave floating hydraulic discs with four-piston calipers up front and a 256-mm disc with a single-piston hydraulic caliper out back, with standard ABS of course.

There are six available driving modes to help adapt the model’s behavior to the rider’s needs. The options are tour, urban, gravel, and off-road as well as two customizable settings. The models also feature a wheelie control function to keep both wheels safely on the ground.

Considering the Adventure Sports has been designed to take the Africa Twin a step further, it has been given the tools to do so, starting with a bigger gas tank. The size of the tank increases from 5 gallons to 6.5 on the Adventure Sports. The top-of-the-line version is also equipped with a slightly different fairing than the standard Africa, integrating auxiliary lighting at the front, a taller windscreen, and a wider sump guard. Other features specific to the Adventure Sports include a luggage rack, an accessory socket, and heated hand grips.

The 6.5-inch TFT display gives access to the model’s functionalities, including Apple CarPlay and Android Auto, Bluetooth connectivity, ABS deactivation, and more. Cruise control is now standard across the board. Available options include a crash bar, aluminum panniers, as well as weatherproof storm bags.

The new Honda 2020 Africa Twin and Africa Twin Adventure Sports are expected in dealers at the beginning of 2020 and prices are listed as follow: