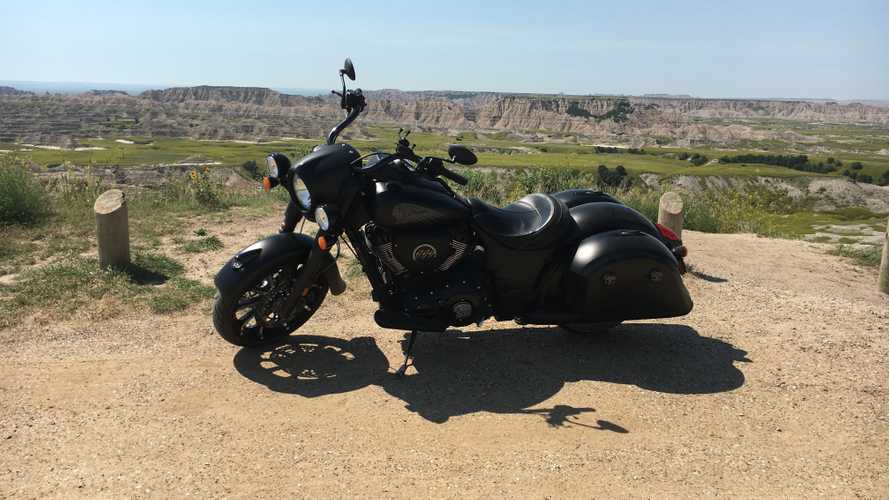 If you like a big badass bagger, this is the bike for you.

Having been born and raised in Massachusetts, when I hear the name Springfield, I think of the city in the western part of the state with the Basketball Hall of Fame, a Smith and Wesson factory, and the original home of Indian Motorcycles. That company went out of business in 1953, but after a few false starts, Polaris has brought Indian Motorcycle (with no S) back from the dead. The Springfield, first introduced in 2016, is a big bagger named after Indian's ancestral home. They were kind enough to loan me a Dark Horse version of the Springfield during my stay at Sturgis, which I adoringly named "Buffalo Springfield." (Sadly, I saw no buffalo during my trip.) This enabled me to not only blend in with the other attendees but also to put the bike through its paces. How does it hold up against its most obvious competition from Harley-Davidson, the venerable Road King?

Indian basically let me pick anything from their Sturgis demo fleet to use for the week I was there. I chose the Springfield Dark Horse mainly because it looks seriously badass. "Dark Horse" is Indian's name for their blacked-out versions of various models, which also include the Chief and Chieftain. I've ridden a few Harleys but never an Indian, so I was interested in a model that would be a good example of the company's larger bikes, since Jason is already testing a Scout.

I chose the right bike for my needs, as well as for looking cool around Sturgis. The bike got many random compliments for its looks, with its chrome replaced by flat black everywhere. The headlight gains a small fairing, which as far as I can tell is only for looks since I felt no wind protection from it whatsoever. It looks good, though, so that's okay. The front fender is a more open design than the normal model. This particular bike was a single-seater, which was fine since I was traveling alone. The contours of the saddlebags match the back fender well. They also have remote locking, which was great for storing my extra water, rain gear, and camera equipment when I was off the bike.

Power comes from Indian's "Thunder Stroke" 111 cubic inch (about 1,800 cc) V-twin engine, which, of course, is also blacked out on the Dark Horse model. Did I say power? I meant torque. Indian gives no horsepower number, but its 119 foot-pounds of torque means that there is always more grunt on tap than you need for pretty much any situation. That's more torque than some cars I've owned, which is good because it connects to the back wheel through a six-speed transmission and belt drive to propel the Springfield's 802 pounds down the road. It's also extremely smooth, unlike a Harley—perhaps a little too smooth for this type of bike. The engine doesn't exhibit much personality, which can be a good or a bad thing depending on what you like.

Despite its weight, the Springfield handles quite well for its size. With large 46 mm forks and a rear monoshock, I felt quite confident in the moderate sweepers of Vanocker Canyon Road and Spearfish Canyon. When it came to the slow, tight turns of Iron Mountain Road and Needles Highway, I could definitely feel the weight of the bike working against it. It was always predictable, though, and I had no problem negotiating even the tight hairpin turns, even if I had to drop to first gear to do it. The pair of 300 mm disc brakes in front, with a single 300 mm disc in back, both with ABS, hauled the bike down from high speeds quickly and effectively. The Indian felt, dare I say, a bit more sporty than the equivalent Harley. Don't get me wrong. It's no FTR 1200 by any means. But compared to the Street Glide I put 500 miles on in Florida a while back, the Springfield was much more eager to take the turns and accelerate out of them. I did overtake a Harley or two in my travels.

Like most Indians, the Springfield has three ride modes: Tour, Standard, and Sport. The suspension is not adjustable, so this simply adjusts the throttle response. My favorite mode was Standard. It fit the bike and my riding style well. I felt that Sport mode was too jumpy from idle. I like a little more fine control over the throttle than Sport mode gave me. Much of the time, however, I found myself in Tour mode. Between Sturgis traffic and cruising slowly around the Buffalo Chip, the slower throttle response helped me ride more smoothly when I needed to. Once I cleared traffic, though, I put the bike back into Standard mode for the type of riding I wanted to do.

Not everything was perfect with the Springfield. My biggest issue was with the fuel gauge. It has one, which is more than can be said for many motorcycles. Unfortunately, its readings varied so much as to be almost useless to me. Between turning the bike off for a photo opportunity, then turning it back on again, the reading could change by as much as a quarter tank. It's almost like the needle position was tied directly to the estimated range remaining, which is a wildly inaccurate reading in any vehicle I've ever tested. The gauge dropping from 3/8 to 1/8 during a photo stop caused me to panic and head straight back to civilization instead of visiting the Crazy Horse Memorial like I wanted to. Miraculously, the gas tank magically refilled with fuel on the way, coming back up most of the way to 3/8 after I was too far away to head back. You'd be best off measuring range the old fashioned way, with one of the two trip odometers rather than the gauge.

My particular Springfield had no windshield. This was fine up to speeds of around 65 mph. I-90 heading back from the Badlands, however, has a speed limit of 80 mph. Since the law allowed me to, I let her rip. The Springfield is perfectly stable and capable of 80 mph and beyond. The limiting factor at those speeds was my upper body. I found myself setting the cruise control, then hooking my fingers around the grips and hanging on for dear life. Later I dropped my speed to 75 as a compromise between comfort and forward progress. This is not a complaint about the Springfield itself, however. The optional windshield would have cured this problem. So would the batwing fairing of the Chieftain, which I later took for a demo ride to prove this. If you plan to do a lot of highway riding, consider stepping up to the Chieftain for its adjustable windshield and extra features.

If lower speeds are all you need, though, the Springfield might just be the bike for you. If, like me, you like the cruiser style but also enjoy bombing through some twisties, the Springfield will do both of these quite well, better than the equivalent Harley, in my opinion. A Road King has a slightly more comfortable suspension, but the Springfield's firmness is what gives it the handling advantage. For that reason, the Springfield is the big bagger I'd have.