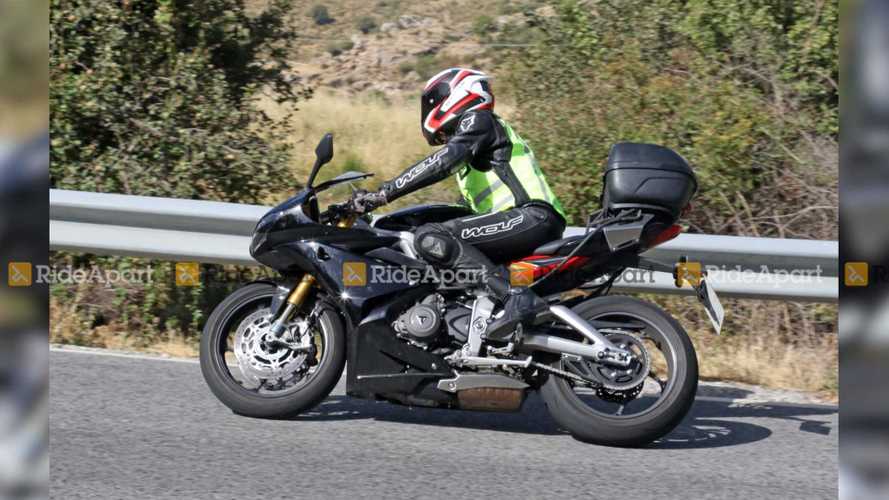 Thruxtons and Tigers and Daytonas, OH MY.

Triumph loves triples, and apparently that love isn’t only limited to engine types. We can say that with a reasonable amount of certainty because we have a slew of new spy shots to share with you from not one, not two, but three upcoming Triumphs. Somewhere, Count the Count is laughing and wishing he had his ‘M’ endorsement, because he—like all of us, including you reading this—probably wants to ride at least one of these.

This model was recently confirmed as existing by Triumph, and is scheduled to be unveiled at the 2019 MotoGP British Grand Prix on Friday, August 23, 2019. There will be two separate runs of this extremely limited edition model, with 765 bikes to be split between Europe and Asia, and 765 bikes of a slightly different variant to be split between the US and Canada.

The entire thing is a straight-up Moto2-derived bike, and both versions will come with a very special limited-edition paint scheme. Full specs, presumably including exactly what engine and other developments these road bikes will share with their Moto2-spec parent bike, will be released on August 23. All bikes will feature individual numbering on their top triple clamps, and will be available in March 2020.

Here, There Be Tigers: New Triumph Tiger 800 Spotted In The Wild.

With more of Triumph’s competition in the middleweight ADV market stepping up its game, Triumph knows it needs to do the same. Since a refresh just came in 2018, it’s not clear exactly how different the new 800 in these photos will be. The exhaust looks exactly the same, and there’s not a lot else that looks hugely different from the existing 800, either.

Less immediately visible possibilities include refinements of power delivery, and occasional rumors of bumping it up to a 900 just to stay ahead of the pack have been floated, as well.

However, we don’t know what we don’t know yet, and so all we can do is look at these photos and speculate about what (and where) future Tigers will bring us.

Fade To Black. Thruxton R Black, That Is.

We may have just had the Thruxton R TFC introduced for 2019, but Triumph certainly isn’t letting that stop them from bringing out another Thruxton R option that’s more accessible to more people.

MCN spotted a salted, scuffed, and otherwise winter-battle-worn Thruxton R Black back in February 2019, and speculated that perhaps Triumph was testing how well the black bits would hold up to road salt.

These new photos show a much cleaner bike, which is something you’d expect since it’s now mid-summer and salt is presumably far less of an issue—unless you’re talking about the kind that comes from a particularly spirited ride.

Notably, previous Black editions including the Bonneville Bobber Black, T100 Black, and T120 Black also had matte black exhausts in addition to the blacked-out forks and engine bits—so this is a bit of a change. However, on the regular Thruxton R, you’d see gold forks and much more shiny chrome throughout.