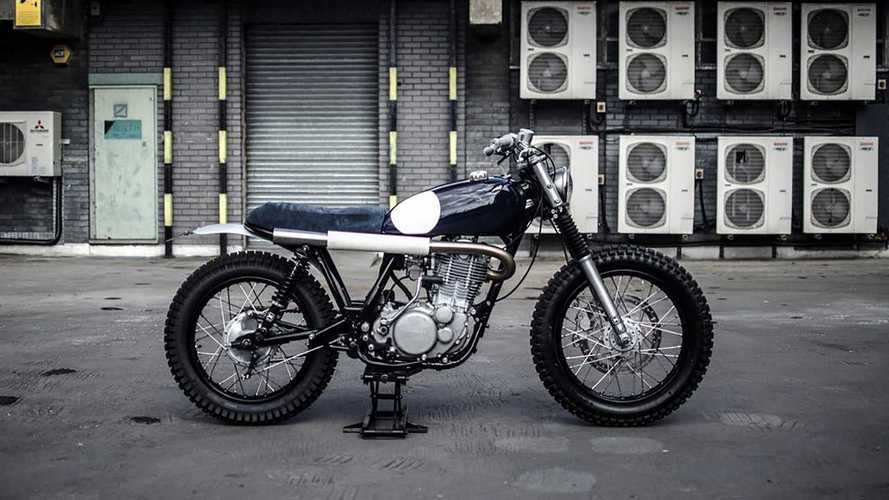 This little scrambler tackled the Sahara.

When it comes to documenting amazing custom bikes stories, our colleagues over at Silodrome are hard to beat. They’ve dug up yet another gorgeous build, this time described in the words of the custom shop co-founder himself, Bujar Muharremi.

This Custom Bike: Come Get Offended At Terrible Welds With Me
⠀

The work is that of British-based shop Auto Fabrica, founded by brothers Bujar and Gazmend Muharremi. While many of the projects listed on their Website are based on Yamaha SR250s and 500s, some of their most striking and modernist designs have been built using such models as Yamaha SXRs, BMW R80, Moto Guzzi Lemans, and others.

The guy who approached Auto Fabrica to commission the Type 7G had a very particular request: he needed the bike to be rally-ready for the Scram Africa desert raid. This future scrambler needed to actually be able to “scramble”.

The base of this build is a first-generation 1978 Yamaha SR500, a standard 499cc single-cylinder model—a model that remained in the Yamaha catalog for 20 years, until 1999. The model was introduced as a straightforward, easy-to-maintain little bike that used the block from the XT500 enduro model introduced in 1975. Considering the starting model’s original off-road inspiration, turning it into a modern-day scrambler was a bit of a no-brainer. No wonder the shop worked on so many custom XTs!

The donor bike was stripped to its bones. The team rebuilt the engine entirely and included a Mikuni round slide carburetor and an open air filter. The block was painted matte silver and covered with an aluminum skid plate on its underbelly. The straight exhaust pipe was rerouted upwards with the muffler located right next to the new swede saddle—a portion of which is covered with a ceramic guard to avoid any heat transfer (read: burns).

The two-tone spoke wheels are wrapped in knobbies and topped with aluminum mudguards integrated to the frame. While the rear wheel retains its original drum brake set up, the front brake has been upgraded with a Brembo caliper teamed with a 320mm EBC disc.

A luggage rack was added, as well as a Motogadget speedometer, and 3D-printed blinker casings. In fact, according to Muharremi, the special rack even helped protect the little Yamaha on two occasions when it took a tumble during the rally. The color scheme and livery were apparently inspired by the Ferrari 250 SWB.