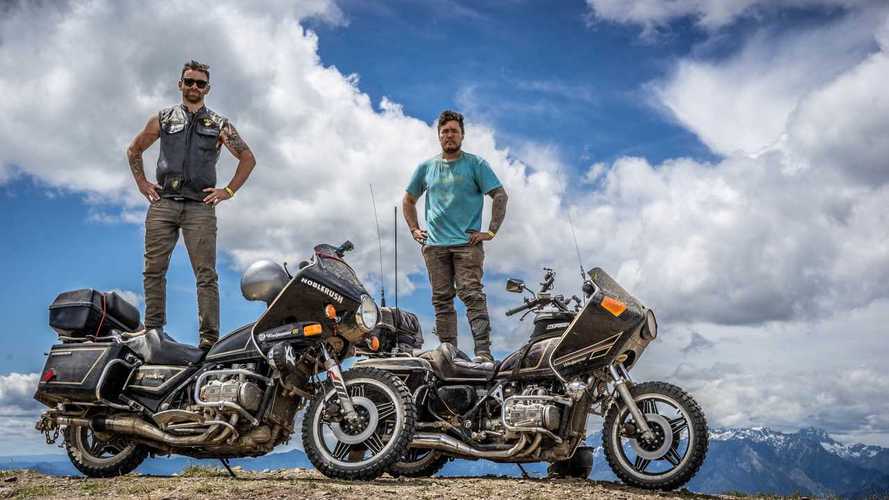 They like their 'Wings so much, they sold their KTMs.

The great (and terrible) thing about bike people is simply this: We love a challenge. We might have other differences, but that’s a huge point of unity. With that fact in mind, what do you do when you’re a couple of guys and you find some non-running 1980 Honda Gold Wings that someone just wants gone from their property? Oh, and there’s also a bike event you want to get to the next day?

Motorcycle Adventure Therapy Is A Thing And We Love This
⠀

High-Pace Off-Road Ride Through The Woods Is Spectacular

If you’re motorcycle people, the answer is simple: You break out the tools, you make your appropriate blood sacrifices to the garage gods, and you dig in—sometimes all night, if you have to. That’s the story of how Dos Honduros started. They’re the two guys you see in that off-roading Gold Wing video, and they swear that they’ve never had so much fun riding anything as they have those two ‘Wings.

Kyle, one half of Dos Honduros, graciously reached out to me after I posted my initial piece about their video, and basically said (I’m paraphrasing here), “sorry, but you’re wrong, and our real story is WAY better.”

You know what? He’s 100% right. He also wants everyone to know that this project wasn’t just something that he and his friend Zac did for a laugh—they love their ‘Wings, have ridden them for thousands of miles, and even sold some KTM 1190s that they had because they like ADVing their ‘Wings better.

When I asked what made them want to take their Gold Wings off-road, Kyle said, “We wanted to see what they were capable of. Turns out they are capable of a lot, and we have been pushing their limits for two years now.”

“Zac and I have always been known for our antics in the moto community, so these trips fit us perfectly,” he continued. “As far as the Touratech Rally, we wanted to go and take the route we did to show that you don’t need to spend 30k on a bike to have fun adventuring. Both of us have owned upwards of 20 bikes in the past years and have both agreed that pushing these Wings is the most fun we have had on two wheels.”

In fact, he told me, they’ve been running the Gold Wings as their primary ADV bikes for the past two years. I asked if they had one or more bikes, and he said, “We both own a lot of bikes, we are avid enduro riders and [also] have a few enduro bikes. We actually own 4 goldwings and a couple old CB900cs.”

It was comprised of two parts, Kyle said. “The build process was A: Get it to run. B: Make it look cool.”

“They are both stock Gold Wings. We switched out the stock Honda fairings with Vetter WindJammer fairings because they look better, even though they are a little heavier. We also added Kenda big block tires for looks. We added stereos, CB radios, KC lights, trailer hitches to haul our enduros, and of course added cup holders.”

This bit, right here? That’s probably my favorite part. Dos Honduros also sent over some photos from their trips, and it turns out their Gold Wings also make pretty good enduro haulers. In the right hands, these bikes are proving to be more than capable ADV machines. Kyle said it isn’t always easy. In fact, it’s often challenging—but even more than that, it’s always fun, and that’s the most important part.

Dos Honduros does lots of moto stuff and are very active online, and you can follow them on YouTube, Instagram, and Facebook. Many thanks to Kyle of Dos Honduros for reaching out, for sharing their story, and for sending us these great photos.