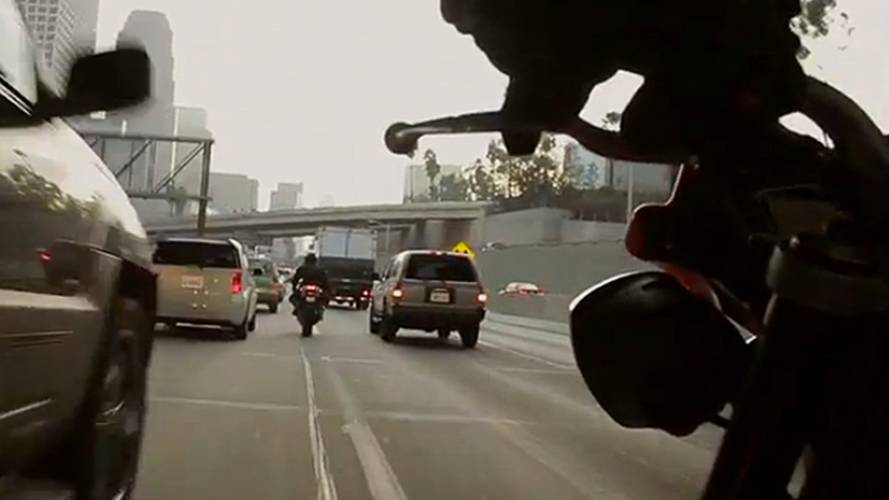 Your run-down on what's up with lane splitting and filtering.

Lane splitting, lane sharing, lane filtering, shoulder surfing... there are as many laws as there are possible maneuvers and keeping track of everything can be a bit dizzying. Especially since the laws greatly vary from state to state. Worry not, we’re here to (try and) keep up on them and let you know where you can do what. We updated the map with the latest information about that so let's have a closer look.

Over the past few years, there have been loads of bills introduced to legalize lane splitting and filtering. Some have passed, some have died, and some are still undergoing committee consideration.

There are many states that do not have written laws explicitly forbidding lane-splitting but the maneuver is not quite specifically legal either. It is up to the discretion of every police officer you pass whether they are letting you get away with it or they are having a bad day. Here's a handy graphic for you.

Keep in mind that while these particular riding techniques may be legal where you’re riding, you’re never under any obligation to perform them. It’s just an available option should you decide to proceed.

All that said, let’s roll out exactly what’s going on where:

After a first attempt at changing the law on the matter of lane splitting with Senate Bill 1007, an effort that ultimately fell through, Arizona is back in the lane splitting game. In January 2020, House Bill 2285, was introduced by Representative Noel Campbell to restart the discussions about legalizing the maneuver. The motion is currently being considered.

This forward-thinking state has allowed motorcycles to lane-split for some time by dint of a vague "it’s not illegal" stance. In 2016, lane-splitting was made explicitly legal, making California the only state to allow it to such an extent. Yay, riding in California! Try it when you’re there; it works and it’s magical.

Lawmakers in the Nutmeg State are actively considering Senate Bill 629. If passed, would make both lane splitting and filtering explicitly legal. The bill has been introduced and referred to the Committee on Transportation but there’s been no movement since.

The Hawaiian islands made shoulder surfing legal for motorcyclists. Due to Hawaii’s narrow roads, lane splitting and filtering are often not an option, but motorcyclists are now permitted to ride the shoulder of the road when there is congestion.

House Bill 2314 was referred to the Speaker's desk. The proposition to make lane splitting legal there is in discussion. If it is approved, motorcycles would be able to travel between cars on roadways where the speed limit is 50mph or greater, and traffic is moving at 10mph or slower. If you live in Oregon and you support this, do contact your legislators and let them know.

In March of 2019, Utah legalized filtering becoming the second state after California to formally rule on a motorcycle-specific maneuver. Lane filtering is not as permissive as lane splitting but can help motorcyclists avoid being tailgated.

In January 2020, Representative Tony Wilt submitted House Bill 1236 to amend the Code of Virginia and allow motorcyclists to lane split in the state. The bill was referred to the Committee on Transportation.

The West Coast state introduced a bill to legalize lane splitting in 2015 that ultimately fell through. In January 2019, lawmakers reintroduced it as Senate Bill 5254 and it's currently in the hands of the Committee. It was reintroduced and retained in its current status on January 13, 2020. If you live in Washington, get on the phone.

Honorable mention goes to the Canadian city of Toronto, where filtering throughout the city, as well as allowing motorcycles to “use reserved lanes” in some specific areas of the city, is all up for discussion with City Council Agenda Item MM43.53. This agenda item also includes a discussion about dedicated motorcycle parking zones, and of course how to enforce that, and the tax revenue that might be generated from the ticketing. Cheers, Toronto; keep up the investigation!