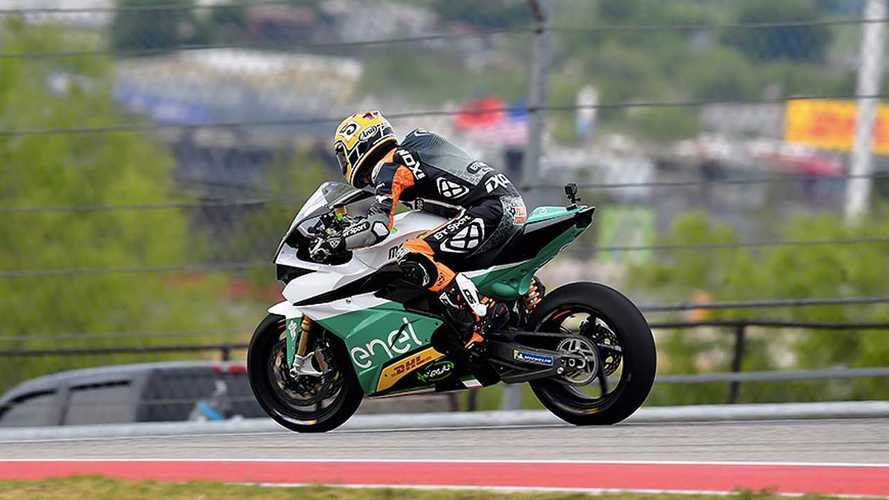 New calendar to be announced.

What could have been a promising debut for the all-new MotoE turned into a nightmare last week in Spain. Despite the major setback, Energica and organizer Dorna Sports confirmed they aren’t backing out. Until the new calendar comes out, looks like the number of events has now been slashed in half.

A SERIES OF UNFORTUNATE EVENTS

You’ve probably seen the images by now: the blazing paddocks of the MotoE in Jerez in which the series lost all 18 of its competing bikes. After only one day of testing in the books for 2019, the motorcycles went up in flames overnight. An entire fleet of bikes now has to be produced if the series is to get its starter 2019 season at all. However, getting close to 20 more bikes ready for MotoGP-quality racing can’t be done overnight and that’s the harsh reality the debuting MotoE series is facing.

The May 5 Jerez race has already been canceled following the fire—despite the first race of the original MotoE calendar being a month and a half away. It has now been confirmed that the May 19 Le Mans event will also get the boot. The first official race would likely now take place at the Sachsenring, in Germany, on July 7.

The series will then head to the scheduled Austrian Grand Prix on August 11 before seemingly closing things off in Misano on September 15. An official calendar has yet to be released and according to Motociclismo, it is probable that the organizers are looking into two more events to respect the initial five-event calendar.  There is in fact talk of a season debut in June instead—possibly at one of the three MotoGP scheduled events in Mugello, Catalunya or Assen. The series organizers will make an official announcement once they know for sure how long replacing all the bikes will take.

Investigators discovered that a short circuit was behind the fire that cost the series two of its five events. It remains to be confirmed what the exact cause of the short circuit was (some are pointing to the Enel charging stations). The fire spread easily because of the race bikes’ high-density batteries.