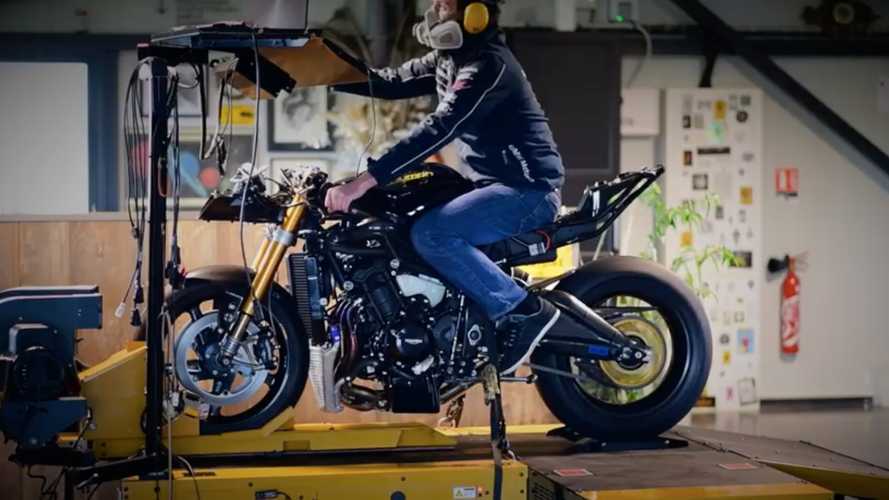 Music of the inline three.

A month ago, we received pictures of a new Triumph Daytona 765 being tested, sporting a new engine, but a familir fairing. The guys at Mmecabike31 stripped and prepped one that they then put on the dyno. Here’s a taste of what the new 765 will be like.

The spyshots from February suggest that Triumph’s returning champion is going to receive a new, bigger displacement inline three mill, carried over from the Moto2 series. Look-wise, we remain in the dark since the mule spotted in Spain last month was sporting a similar fairing to the former Daytona’s with virtually no design changes whatsoever. We’ll have to be patient so get our eyes on the new Daytona.

In the meantime, however, we get to check out how the bike acts and reacts on the dyno. Blackhat Motorcycles shared a video on Facebook of the new Daytona 765 being put through its paces. The bike has been prepared Moto2-style by French shop Mmecabike31 specialized in Triumph bikes. The bike shown in the video is fully stripped to its bones—without as much as a seat, likely protecting the model’s new design that has yet to be unvealed.

Granted, we’re already (sort of) familiar with the star of the video, namely the engine. In fact, last year, Triumph was confirmed as the new powertrain supplier for the Moto2 series, replacing long-time supplier Honda’s 600cc mill. It’s nice, however, to get to hear the engine taken out of a racing context and to hear what it’s capable of.

While Triumph’s former Daytona 675 became an overnight sensation when it launched in 2006, we’re looking forward to the return of the nameplate. Hopefully, the new 765 will perform as well in the streets as it does on the track.