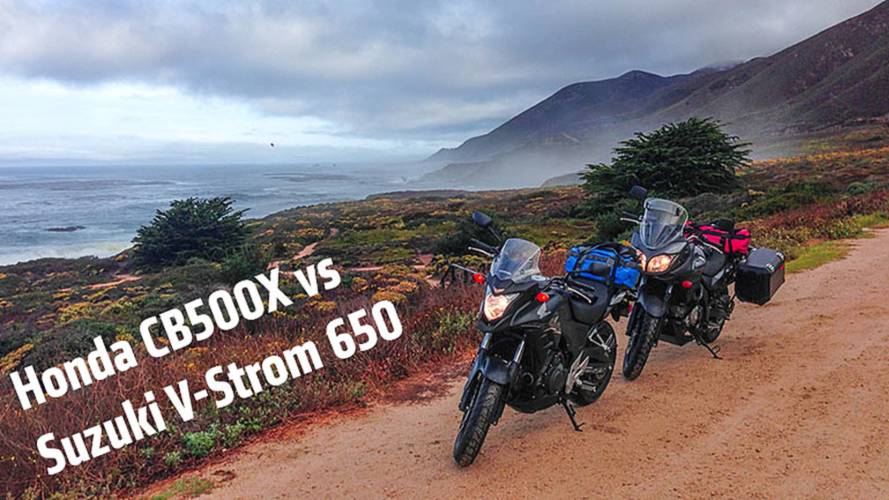 Check out this Suzuki V-Strom 650 Adventure vs Honda CB500X Comparison Test. Can the new V-Strom romp all over the CB500X? Find out!

The 2013 Honda CB500X and 2013 Suzuki V-Strom 650 ABS Adventure are both small to medium sized, affordable, road-oriented ADV bikes that punch way above their capacities and price tags. They’re not direct rivals, but looking at them together may help us understand their unique appeal.

The CB500X is a little larger than the other two bikes in Honda’s new 500 range, but like its stable mates, targets new riders looking for an accessible, fun bike or experienced riders looking to downsize into something more economical and practical. At 471cc, it’s much smaller than the class norm, but its low weight, slim dimensions and the astounding ease with which you can ride it make the CB500X uniquely appealing.

Until the Honda arrived on the ADV scene, the V-Strom 650 was considered the smallest bike in the class. "Small" fails to define the V-Strom to anyone who's ridden one though; its torquey motor combines with the relatively light weight to provide performance on-par with the big, 1,000cc+ adventure bikes. The spacious ergonomics, too, are anything but small, providing all-day comfort for rider and passenger alike. It's simply the most practical motorcycle on-sale today.

Together, these are two of RideApart’s favorite motorcycles of 2013.

ABS is standard on the V-Strom, as is a comprehensive digital dash that includes readouts for fuel, two trip meters with their own average MPG readouts, a gear position indicator, external temperature gauge and even a clock.

The tested model you see here is the V-Strom 650 Adventure, which adds a tall, adjustable windscreen, engine crash bars and the widest-set lockable panniers you’ve ever seen. It brings a $1,500 premium over the base V-Strom, but no mechanical differentiation.

The Honda CB500X is considered a small Adventure bike by virtue of its 471cc, liquid-cooled parallel-twin. The same motor found in the 2013 Honda CB500F and 2013 Honda CBR500R. Designed to meet Europe’s new A2 license tier for new riders, which specifies that capacity, power level and even power-to-weight, that motor develops 47 bhp at 8,500 rpm and 32 lb.-ft. of torque. The CB500X weighs 430 lbs (wet).

The CB500X uses non-adjustable 41mm forks with 5.5 inches of travel and a linkage monoshock that’s (difficulty) adjustable for preload only and has 4.7 inches of travel. Different forks to the other two 500 models, but the same shock.

Tested here is the 2013 Honda CB500X ABS, which carries a $500 premium for its superior braking setup.

Headed to the launch of the 2014 Yamaha FZ-09 in San Francisco, we slogged up from LA on the 5 freeway, then took the fun way home, coming back down Pacific Coast Highway.

We’ve also spent the last few weeks riding both bikes around Los Angeles, in everything from dense urban traffic to some of the best mountain roads in the country.

Around town, you’d be hard pressed to find two better motorcycles. Once shorn of its panniers, the V-Strom feels nimble, light and well-balanced. Quick steering makes low-speed maneuvering a cinch. The clutch is light enough that it doesn’t punish your left hand in heavy traffic. The seat, while higher than that of a naked or sport bike, doesn’t prohibit a solid footing, even on uneven terrain.

In fact, the V-Strom feels like the perfect city bike, until you try the Honda...

Riding them back-to-back, the CB500X suddenly makes the Suzuki feel sluggish. While not all that light on paper, the Honda feels incredibly light. That combines with relatively narrow bars and slim hips to make squeezing through traffic almost effortless.

Both motorcycles also excel at touring. We expected the larger V-Strom to have a huge advantage of the Honda, but neither is bothered by an 80-85 mph cruise. We used the Suzuki’s panniers to hold our computers, camera, repair kit and extra riding gear, then strapped a couple North Face bags to the back of it to hold our street clothes. The extra weight of the panniers and luggage leveled the performance gap between the two bikes.

Due to that heavy load and gusty wind conditions, fuel economy on the Suzuki fell from a 52-55 mpg average to 40 mpg during the trip. Meanwhile, the little Honda (without any additional weight, aside from one bag strapped to the seat) was able to maintain 50 mpg, despite working harder at high revs to keep up.

The V-Strom was better able to accelerate from highway speeds to make a pass, but loaded down, it was also subject to speed wobbles above 85 mph.

Both bikes are great for carrying passengers, but the Suzuki is obviously more comfortable two-up thanks to its larger proportions and additional torque. We’d keep two-up trips on the Honda to around town or short freeway jaunts.

Up Angeles Crest Highway or riding down PCH, it’s again the Honda that surprises with a greater turn of speed over the course of real road conditions. Riding it while RideApart staffer Wes Siler was on the V-Strom was one of the only times I’ve ever been faster. It’s simply light, friendly, communicative and confidence-inspiring to a more significant degree than the Suzuki, which already excels at all those traits.

The V-Strom is a fantastically complete motorcycle. The seat is all-day comfortable, the power is all you need in the real world and the handling manages to be both nimble and stable. It’s the perfect bike, whether you’re running errands or sitting on the freeway for hours on end.

The Suzuki’s windscreen is incredibly effective at keeping rain and insects from hitting you and, with the aid of an adjustable lip, minimizes buffeting too.

Its panniers are enormous, lock securely shut and to the bike. The left one fits a full-face helmet, but the right is a tad smaller due to its need to fit next to the exhaust canister.

Pairing 40-50 mpg fuel economy with a 5.3 gallon gas tank gives the V-Strom a minimum range of 212 miles between fuel stops.

The CB500X is also stunningly complete. It’s more capable in town than any other motorcycle we can think of, combining a tall, upright riding position with excellent feel, sharp controls and a willing nature.

Its 17-inch wheels are sure footed over rough pavement and through slippery conditions in a manner reminiscent of a supermoto, just one that’s comfortable and practical.

Look at the Honda’s specs, it’s hard to put a finger on what makes it such a great bike. All we can say is, you ride it much faster and in much more confidence than you’d ever expect to, and have an absolute blast while doing so.

The CB500X’s 50 mpg+ fuel economy is great, its seat is comfortable, the bars are at the perfect level for six-foot riders and its little windscreen does a surprisingly good job of wind management. Every time we come back to it after riding something else, we find ourselves wondering, “How is this thing so good?”

Very little bad, on either bike.

The Honda’s motor gets buzzy at freeway speeds and won’t do such a good job of hauling luggage and passengers, but it’s so smooth that once you adapt to seeing the tachometer rev so close to the redline, there’s no problem cruising for hours on end at 80-85 mph.

Both motorcycles are extremely affordable, asking huge question of all the larger, more expensive motorcycles in the ADV class.

We hate to sound like one of those comparison tests in which everyone is declared a winner, but both of these bikes are stunningly capable and extremely affordable. So, deciding which one is better simply comes down to what kind of riding you do.

Is most of your riding in town, with weekends spent on good roads and the occasional long trip thrown in? Sounds like the Honda CB500X is right for you.

Spend most of your riding time doing distance, but also like riding twisty roads and occasionally pop into town? Then you want the Suzuki V-Strom 650.

You can’t go wrong with either bike.