12 Best Sounding Motorcycles of All Time 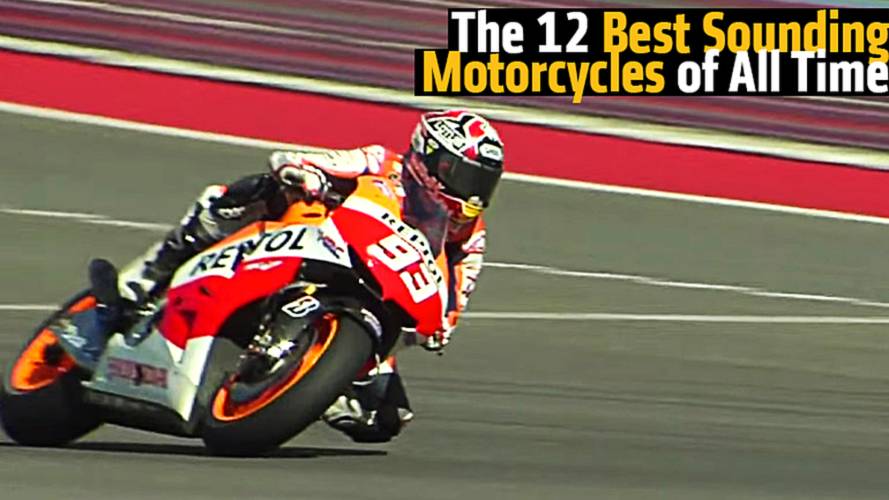 Starting with the Yamaha R1 Crossplane Crank, we've compiled a list of the best sounding motorcycles of all time. Get ready for an aural heaven.

In no particular order of precedence and for no good reason, we are listing the 13 best sounding motorcycles of all time. This list is full of undeniably unique and amazing two-wheeled machines that provide the chorus for our collective joy of internal combustion.

Since 2009, the venerable R1 has used a crossplane crank that supplies a mix of V-twin pull with an inline 4 scream up top. Tractable power and throttle telepathy to the rear tire is only half of the equation with the R1—the sound of the exhaust notes are just glorious. The crossplane design in the R1 also makes for a straight, smooth torque curve and super quick revving. Yamaha has used the design on a few other models, but the sound it creates for the R1 is one of our favorites.

The MV Agusta is a 70hp, 4-cylinder, 500cc GP from the late '50’s, what’s not to love? Similar to a WW2 era fighter plane, its sound is deep, relentless, and a bit evil. It can still haul ass with the best of them—just ask John Surtees.

The RC166 has an inline 6-cylinder engine strapped into the frame of a pocket bike. This equates to a diminutive and ferocious moto. Mike Hailwood carried Honda to numerous victories riding the RC166, and earned five of his nine titles with the little bike. At only 250cc, it reaches 18,000 rpm and sounds like a lion, but looks like a sheep. This Honda was crazy fast for its day.

A V4 with 16.5 inch wheels, this Duc's design was completely built from scratch. Not just a GP bike in street clothes, the boys in Bologna made 1,500 of the most impractical street bikes ever—but the sound it makes is worth every cent of the $75,000 price tag.. maybe. At speed, the Desmo RR sounds like a GP racer, and at idle, nothing else sounds like it. There's 16 valves just pitter-pattering away...

Almost too loud stock, Aprilia's V4 exhaust note is as close as you can get to a GP bike that the law will allow. The factory parts make it sound good, and with a full exhaust, it sounds even better. Open it up and say goodbye to the ear drums.

The sinister inline-four sound of the Gixxer can reach a scream in seconds. It can also reach mach 2 just as fast—if you can keep the front wheel down. It's super cool, bro.

Like a pork chop, this British oddball is another option to an inline-four—it's the other white meat. The Triumph's inline-three sound is like no other. Add that uniqueness with some quick shifts and the Daytona sounds brilliant.

This thing sounds like a hundred angry bees in a beer can. At the race track, hearing strokers charge down the front straight sounds a lot like the old days, and it also reminds us of the brave men who rode the savage two strokes to glory. Smoking, sputtering and spitting fire, the NSR500 is the sound of classic GP.

A garbage truck falling off the empire state building, hitting the ground would probably sound like the RC213V going from 6th to 2nd gear. It's loud, scary, and amazing all at the same time.

You got to love that dry clutch clatter with punishing base and no treble. It’s trademark Desmo V-twin sound at 10,000 rpm is hard to match. An adept ear can recognize the Desmo sound with sight unseen, and it makes us feel all warm inside. Sigh...say what you will about the expensive brand—it's hard to deny its sweet sound.

For an electric motor with 200-plus hp and over 200nm of torque, the E1PC is epic. This bike has won its class at the Isle of Man while looking like something better suited for a Star Wars Universe. It also sounds like nothing like its internal combustion cousins. It's a unique experience when riding a near silent bike—one that brings a sense or rawness. It may be a noise (or a quietness) we're going to have to get used to.

So... take a motor from an Unmanned Arial Vehicle and shove it into a Moto Guzzi...that’s exactly what this is. Instead of turning a propeller, this sinister lump is now thundering down the highway. This custom Guzzi Lario is strapped to a  750cc Hemi small block twin cylinder motor. Sounds more like a monster truck than motorcycle.

AAAARRRRGHHHHH!! 'MERICA YEAH! The V8 Boss Hoss only needs a beer holder and gun rack to be more American. Just listen to this "badass, cammed-up, 'Vette-powered motorsicle, brotha"… (sorry, I don't know what happened there I think I blacked out.) lol.