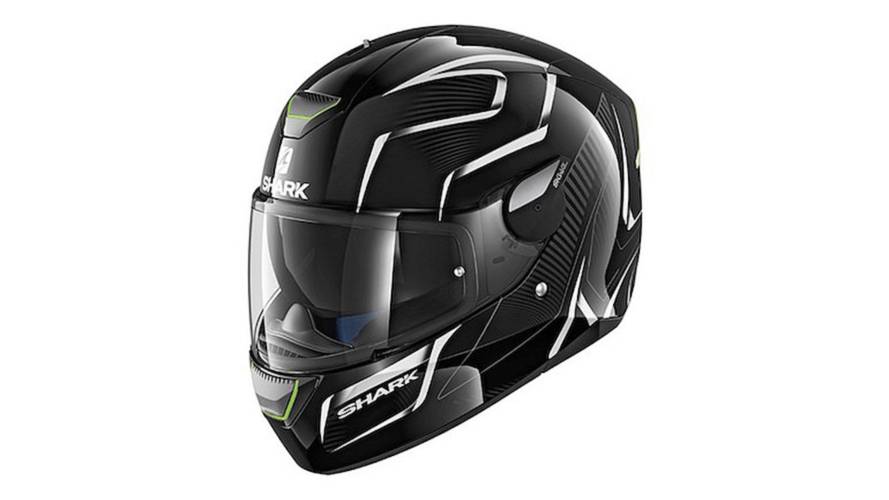 We put the Shark Skwal LED helmet to the test in the worst weather imaginable: commuting in Scotland. Find out how if it's worth the money.

The first thing you need to know about Shark helmets is that they run a little big. When the Marseille, France-based company offered to send one of its lids to RideApart’s sprawling European headquarters (my house) I made my standard request for a size L. Turns out I should have gone for a size smaller.

So, all I can personally tell you about the Shark Skwal LED helmet is that it looks good and the lining is far and away the comfiest I’ve ever experienced in a helmet. It has a flip-down sun visor, Pinlock, and a quirky LED display at the front and rear to help increase visibility. The French are very big on visibility; the country’s law requires that a certain percentage of a helmet’s surface be covered with reflective material.

For a more in-depth review of the helmet, though, I called in the services of my big-headed Scottish buddy, Cam.

Cam lives in Dunblane, in a home once owned – I’m not making this up – by Judy Murray, mother of tennis gods Andy Murray and Jamie Murray. He commutes some 42 miles each way to Edinburgh for work every day in all weathers. It being Scotland, the term “all weathers” can generally be defined as “cold,” “rainy,” or “cold and rainy.” It’s the sort of commute that will highlight the highs and lows of gear very quickly, so it’s definitely worth noting that his overall impression of the helmet has been positive.

Cam had hitherto been relying on a Schuberth C3 Pro, but frequently complained of “Schuberth forehead” – something I had never heard of (I also wear a C3 Pro as my standard lid), but which he assures me is a real thing. A quick Google search seems to back him up. Compared to his C3 Pro, Cam says, the Skwal is comfy but still “a little weird.”

“There's quite a lot of room all around my head, but the cheek pads are clamped onto my cheeks like limpets,” he said. “Weirder still is that the main pressure, not an uncomfortable sort of pressure, is on my lower cheek, just above the jaw, which forces my lips out a bit into a perma–pout.”

A helmet good for improving one’s Instagram game, then. Putting the helmet on and taking it off are easy enough, Cam says, and despite the awkward fit the overall feeling is that it is “very comfortable indeed.”

“It's lovely and light, has no pressure points, chin strap doesn't dig in anywhere, and the venting is very good,” he told me.

Equally getting a thumb’s up is the fact that the helmet is quieter than his C3 Pro.

“I was surprised... The sound of wind is still there but more distant,” he said. “I’m hearing wind hitting the helmet rather than hearing the wind in my ears. This is a very good thing indeed and one of the main reasons I like this helmet.”

The Skwal is available in 30 different styles and colors. The one seen here is the Flynn design.

“I quite like the look of this one,” Cam said. “The graphics are tastefully done and not too in-your-face. The green plastic where the LEDs light up are nice on their own and look integral to the design.”

I’m also a fan of the look. By my eye, Shark seem to have used Arai lids as an inspiration for the shape, which isn’t a bad thing. The look lacks the badass-itude of an angular helmet like, say, a Simpson, but equally doesn’t leave you looking like an old man.

Removing the visor for cleaning (no real need to carry a spare visor since the helmet has an internal sun visor) is not as easy as perhaps it should be. On paper, visor removal is a relatively simple process but in practice, Cam says, “it takes some controlled strength.”

More importantly, though, the helmet performs well on the road. Cam says it is very stable at motorway speeds, which, having ridden with him quite a bit, is generally a speed in excess of actual motorway limits (70 mph in the United Kingdom).

“At full tilt, turning my head to either side can be problematic in my Schuberth, the wind catching the helmet and torquing my head... This helmet is more stable,” Cam explained. “It cuts through the wind rather than being affected by it.”

“I've yet to have a single bit of fog in there,” he said. “The helmet is pretty airy, so I’m pretty sure the Pinlock is helped by the extra airflow.”

Again, remember that Cam lives in Scotland, where summer temperatures can easily drop to the single digits in Celsius (the low 40s in Fahrenheit), so despite his only having had the helmet for a month or two he’s already put it through a year’s worth of weather.

Speaking of Scottish weather, he’s also had plenty of opportunity to test the lid in the rain.

“I got really soaked during an eight-hour ride from from Barnsley (in England) to Glasgow and the only 'problem' was the chin strap got wet,” Cam said. “Because of the airflow – even with vents shut – I was able to keep the visor closed without any misting problems, so my head was bone dry.”

“I love the fact the visor stays exactly where you put it,” Cam said. “If you crack it open, it stays cracked open, even at speed – not something I can say for other helmets.

“I like how easy it is to open the top vent. I like how the padding feels – very comfortable. Meanwhile, the low noise levels and stability at speed are things I've already mentioned, but bear repeating. And the lightness makes it a nice place to be, even hours into a journey.”

“I dislike having the visor lift tab only on one side,” said Cam, who obviously has to open and close his visor often when navigating Edinburgh city traffic. "It bothers me a lot that I can't open the visor with either hand or without a weird cross–face maneuver.

“Also, the chin vent is a bit of a faff (That’s Scottish for “pain in the ass”) and the placement and sensitivity of the button that turns the LEDs on and off is annoying. More than once I've accidentally turned on the disco lights just by donning or removing the helmet.”

To that end, Cam admits he’s not a huge fan of the Skwal’s unique selling point: the LED lights.

“They make me feel too conspicuous,” he said.

Having seen Cam filter (aka lane-split) through traffic at 70 mph I’d personally think he’d want the advantage of conspicuity, but, no.

“Just not my thing.”

Is it Worth the Price?

In Her Majesty’s United Kingdom of Great Britain and Northern Ireland, the Skwal will set you back roughly £200. Whereas in the United Russian States of America the asking price is a cool $249 when bought from our pals over at Revzilla (FWIW: We don’t have any sort of a reciprocal deal with Revzilla, we just think they’re cool guys. Feel free to buy from whomever you like, though). It carries a four-star rating from SHARP (the testing system mentioned in this article), which puts it on par with far more expensive helmets (the aforementioned C3 Pro, for example, is a three-star helmet).

Cam says that in his opinion the Skwal is “absolutely” worth its asking price, and that had his super-awesome American friend not given him the helmet for free he would have happily dug into his wallet to pay for one.

“I wasn't expecting so much helmet for the money,” he said. “The quality is there and with the comfort, quietness, good venting, and stability at speed, I'm delighted with it. Two thumbs up.”