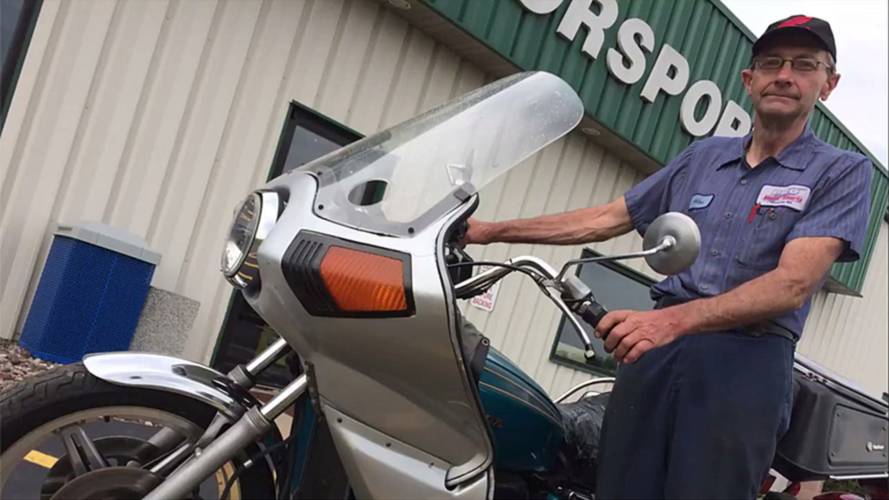 Al Zehrt bought the Honda Gold Wing when he was 19 in 1976 and has been touring North America on it ever since, recently turning over one million miles.

Al Zahrt is co-owner of Pro Motorsports in the town of Maine, Wisconsin. He bought the 1975 Honda Gold Wing new when he was 19, and has been riding it ever since. He never gave much consideration to setting any mileage records, but then the odometer rolled past 500,000 miles.

“I never really thought about it much,” he said, “but figured well, I’ll just keep going and see what happens.”

What happened was 41 years of riding through the 48 contiguous states and several Canadian provinces. The miles included three engine replacements, plenty of duct tape and little concern about the motorcycle’s appearance. According to the Wausau Daily Herald, the lenses of the tach and speedometer are fogged and spiderwebbed with cracks from exposure to the elements, and the exposed wiring connects to a digital timer that Al uses to keep track of the time he spends on the road.

Zahrt says he logs about 25,000 miles a year, and uses the Gold Wing as his primary means of transportation from April to November. Wisconsinites are hardy folk.

READ MORE: Ask RideApart: How Many Miles Are Too Many on a Used Bike?

The town of Maine, by the way, is located in the northwest corner of Outagamie County. The 2000 census listed the population at 831.The current population is approximately 873. The rural community, bisected by the Wolf River, was founded in 1854 by a group of loggers from Chilton, Maine, where the tree supply was rapidly dwindling. The founders apparently couldn’t agree on a name for the town, and simply decided to name it after their home state.

The interweb showed no listing for Pro Motorsports in the town of Maine, but a dealership by the same name in Fond Du Lac handles Honda, Can-Am, Arctic Cat, Sea-Doo, Ski-Doo, Suzuki, Yamaha and Zero motorcycles. They may want to consider posting a photo of Al Zahrt and his million-mile Gold Wing on the showroom wall.